Between The Lines: “She Did What? Things I Learned While Writing Wonder Women” by Sam Maggs

As regular readers of Pop! Goes The Reader are no doubt aware, I believe strongly in the importance of celebrating women’s stories both fictional and factual, and make a concerted effort to do so whenever possible. This was the impetus behind the blog’s annual Her Story series and why my own reading is consciously curated to focus predominantly on books authored by women. You can therefore imagine my excitement when I was approached by Quirk Books to feature the latest release by the unapologetically awesome Sam Maggs, Wonder Women: 25 Innovators, Inventors, and Trailblazers Who Changed History. Now available in a bookstore and library near you, Wonder Women is a diverse, inclusive collection that explores the oft-overlooked true stories of women throughout history. Fun, funny, informative and empowering, Wonder Women would be the perfect choice for fans of Mackenzi Lee’s #BygoneBadassBroads Twitter series, a wonderful stocking stuffer come Christmas time for the feminist on your shopping list, or a lovely gift when you just want to Treat Yo Self. I was fortunate enough to receive an advance reader copy of the book, and Wonder Women has provided me countless hours of enjoyment and education as Sam shines a light on the achievements and advancements women have made over the centuries and whose stories have largely gone untold until now. Today, Sam has been kind enough to share with us a few of the most memorable moments she encountered while researching Wonder Women. Enjoy! 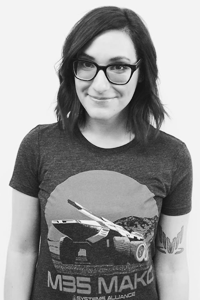 Sam Maggs is a writer and televisioner, who – despite her MA in Victorian literature – mostly writes about geek culture and how it intersects with being a lady. Named “Awesome Geek Feminist of 2013,” Sam is an Associate Editor for The Mary Sue; talks pop culture on TV and movie screens; and her writing has appeared everywhere from the Internet, to books, to national newspapers. She loves YA lit, Pacific Rim, BioWare games, Carol Danvers, and Jeff Goldblum.

She Did What? Things I Learned While Writing Wonder Women

The entire process of writing Wonder Women: 25 Innovators, Inventors, and Trailblazers Who Changed History was eye-opening; I learned so much about so many different incredible women throughout history that it was almost impossible to decide what to include in the book and what to leave out.

But there were a few moments while researching that struck me as particularly fascinating; things that stuck with me long after finishing the book. Perhaps they’re not all the most important facts, but they’re the most human ones – the ones that made me think of these women as ladies just like all of us. Here are some of my favorites.

Pen Pals
In 1880, a young widow in New Jersey named Theodicia Carter picked up an issue of Christian Missionary magazine while waiting for a dentist appointment, and found a letter in the back from a man in India, begging for help for his Hindu wife to come to America to study medicine. Though the magazine wrote them off for their religious differences, Theodicia was moved by the story and immediately got the Indian family’s address from the magazine. She began writing them, and became fast friends with Anandibai Joshi, a teenage girl who would come to think of Theodicia like her aunt. The two of them traded stories and information about each other and their cultures for years before Anandi finally came to America to live with Theodicia and become the first Indian woman to get a degree in Western medicine. Isn’t female friendship incredible?

Don’t Mess With My Gal
In the 1890s, Marie Equi and her girlfriend, Bessie Holcomb, pushed out onto the frontier together and set up a nice little homestead in Oregon, where they could live their life a little more freely than back east. In June of 1893, Marie became particularly vexed when Bessie’s school superintendent shorted her out of the last $100 of her teacher’s salary. So vexed, in fact, that several local newspapers reported that she chased the swindler through the town with a horse whip in hand – to the cheers of onlookers, sick of being cheated out of money by the very same man. Though she was charged, the town almost instantly raised the money for her bond, bought Marie a new dress (since hers had been ruined in the process, of course), and even auctioned off the whip for well over $100. What have you done for love lately?

Catch Me If You Can
Here’s the thing about the infamous Mary Bowser: pretty much everything we think we know about her is wrong. The evidence pointing to the fact that she was, in fact, a well-educated spy posing as a slave in the Confederate White House is the strongest – there are a few interviews that suggest as much. And a woman believed to be Mary gave several speeches across the U.S. after the war ended, telling her tale. But there are several problems with myth as widely-circulated: the “fact” that she had an eidetic memory is from a completely unreliable source, and there’s no evidence to indicate she ever kept a diary, went by “Ellen Bond,” or that she tried to burn down the White House in 1865. Plus, she went by so many different names (Mary Jane/Elizabeth Richmonia/Jones/Henley/St. Pierre/Garvin/Bowser, to name a few) it’s difficult to keep track of her. The photo that comes up when you Google Mary’s name isn’t her, either. We may never know the true Mary Bowser – but that just proves how good she was at her job.

Catch all these stories and many more in Wonder Women – I hope you dig it! Let me know your favorite tales of historical women on Twitter @SamMaggs. 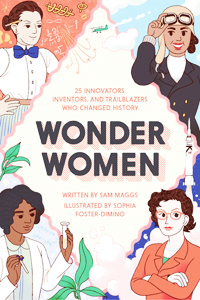 Ever heard of Allied spy Noor Inayat Khan, a Muslim woman whom the Nazis considered “highly dangerous”? Or German painter and entomologist Maria Sibylla Merian, who planned and embarked on the world’s first scientific expedition? How about Huang Daopo, the inventor who fled an abusive child marriage only to revolutionize textile production in China?

Women have always been able to change the world, even when they didn’t get the credit. In Wonder Women, author Sam Maggs introduces you to pioneering female scientists, engineers, mathematicians, adventurers, and inventors — each profile a study in passion, smarts, and stickto-itiveness, complete with portraits by Google doodler Sophia Foster-Dimino, an extensive bibliography, and a guide to present-day women-centric STEM organizations. 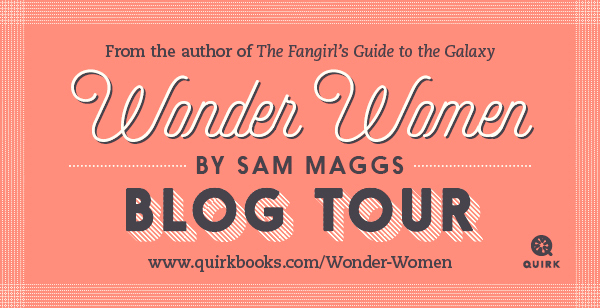 Don’t forget to visit all the wonderful stops along the Wonder Women blog tour for a variety of reviews, guest posts and much, much more!