Between The Lines: The Unicorn Quest by Kamilla Benko

Hi everyone! Today I’m so excited to host the latest stop on the blog tour for The Unicorn Quest by Kamilla Benko, which Bloomsbury describes as “an enchanting, exciting fantasy about a real-world girl searching for her sister in a land full of magic and strange creatures” and which recently received a glowing review in the New York Times for its emphasis on the importance of unity and its inclusion of the complex and compelling relationship between sisters Claire and Sophie. To help celebrate The Unicorn Quest‘s recent release, which is available now in a bookstore and library near you, Kamilla was kind enough to visit Pop! Goes The Reader today to answer a few questions I had about the author herself and her magical debut. 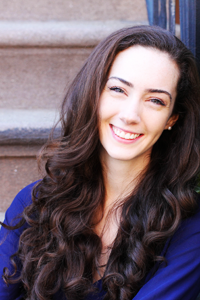 Kamilla Benko spent most of her childhood climbing into wardrobes and plotting to run away to an art museum. Now, she visits other worlds as a children’s book editor and author of the upcoming children’s book novel The Unicorn Quest (February 2018, Bloomsbury). Originally from Indiana, she currently lives in New York with her bookshelves, teapot, and hiking boots.

1. Hi, Kamilla! First, please tell us a little more about yourself. If you could describe yourself in only five words, what would the be?
Creative, introverted-extrovert, Gryffindor leaning Hufflepuff.

2. Did you always know you wanted to be a writer? If not, what did you dream of one day becoming?
I knew I wanted to be a writer, but not necessarily an author. Writing an entire book? It seemed impossible! But at the age of eleven, I decided I wanted to be the person who chose which books should be published, and I learned that job was called “editor.” So ever since then, I’ve dreamed of becoming a children’s book editor. When I moved to New York and started working with authors, I realized that books aren’t just downloaded full from their heads, and I started to think, “Well, maybe I can write a page. Maybe I can write five pages.” And slowly, but surely, I wrote my first book, The Unicorn Quest!

3. When you’re not writing, what do you enjoy doing in your spare time?
I love spending time with cat, going on hikes, and cooking!

4. What books can currently be found on your bedside table?
The Serpent’s Secret by Sayantani DasGupta, Roshani Chokshi’s Aru Shah and the End of Time, and Nevermoor by Jessica Townsend. They are all so wonderful! (Yes, I read multiple books at a time.)

5. If you could describe your middle grade novel, The Unicorn Quest, in only five words, what would they be?
Sister-magic solves unicorn mystery!

6. The Unicorn Quest tells the story of sisters Claire and Sophie Martinson, who discover and must subsequently navigate a magical world populated by unicorns and wraiths. Why unicorns? Why this story? Is there anything in particular that inspired this fantastical adventure?
In literature and history, unicorns take many forms and symbolism, however one thing (almost always) stays the same: they are rare; they are special; and they are elusive. What Claire — my eleven-year-old heroine — hates most of all is not knowing things. And like Claire, I believe that the scariest things are the questions without answers, the unknown. As you grow up, you learn more and understand the world around you, but even as an adult there are circumstances without answers — answers are elusive things! And so in my mind, the sisters had to be questing for something just as elusive, special, and rare as knowledge: the unicorn.

On a less metaphorical note, this story sparked in my imagination when I took a trip to the Cloisters, an extension of New York’s Metropolitan Museum of Art. This place houses the famous Unicorn Tapestries which depicts the medieval hunt of the unicorn. The relationship between the sisters is molded after me and my little sister (though she’s not so little anymore!) and some events and situations that plagued and delighted our own childhood.

7. Is there a particular theme or message you hope readers will take from The Unicorn Quest?
In the magical world of Arden which Claire and Sophie find themselves in, art is magic. The Unicorn Quest explores the possibility of magic, no matter how slight, in the everyday world. I wanted to write a book that recognizes that the very act of planting a garden, forging metal, sewing clothes, or carving stone, is one of magic. It is a transformation of one thing into something entirely different. The Unicorn Quest is, at its core, a story about change: of the ever-shifting relationships within a family; of history’s mutating narratives; of chimneys that turn into wishing wells; of the fearful hearts who become leaders. It’s a story about 11-year-old Claire Martinson, who loves her 13-year-old sister, Sophie, with all her being, even though Sophie seems to be drifting away from her. And, of course, this is a story about unicorns.

8. What’s next for Kamilla Benko? Are you currently working on a new project? If so, can you share a little about it with us?
I am currently working on Book 2 and Book 3 in The Unicorn Quest! They continue the adventures begun in Book 1, and reveal what happens to some of the characters. The titles should be announced soon! 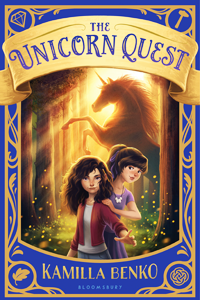 Claire Martinson still worries about her older sister Sophie, who battled a mysterious illness last year. But things are back to normal as they move into Windermere Manor… until the sisters climb a strange ladder in a fireplace and enter the magical land of Arden.

There, they find a world in turmoil. The four guilds of magic no longer trust each other. The beloved unicorns have gone, and terrible wraiths roam freely. Scared, the girls return home. But when Sophie vanishes, it will take all of Claire’s courage to climb back up the ladder, find her sister, and uncover the unicorns’ greatest secret. 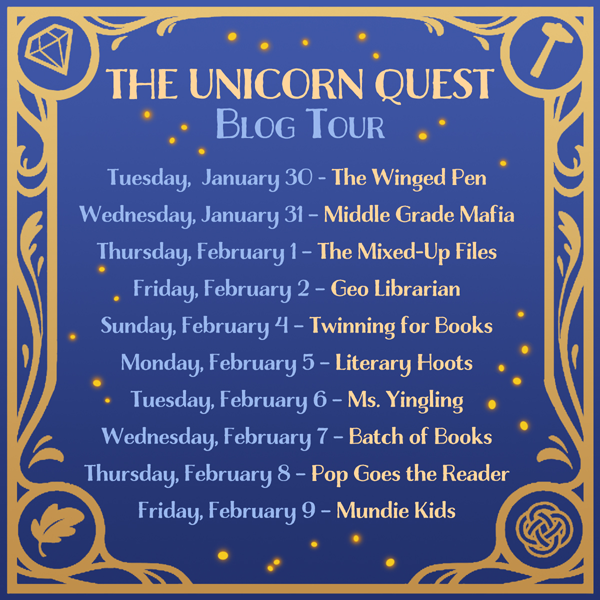 Don’t forget to visit all the wonderful stops along the The Unicorn Quest blog tour for a variety of reviews, interviews, giveaways and much, much more!

As an extra, exciting bonus, Glasstown Entertainment has been kind enough to offer one lucky reader the opportunity to win an finished (hardcover) copy of The Unicorn Quest! This contest is open to U.S. residents only and the prize will be distributed by Glasstown Entertainment at the conclusion of the giveaway. Please fill out the Rafflecopter form below to enter!