Hi everyone! Today I’m so excited to welcome author Alexandra Sirowy to Pop! Goes The Reader as I host the latest stop on the blog tour for Alexandra’s forthcoming novel, The Telling. Coming soon to a library and bookstore near you on August 2, 2016, The Telling is a haunting thriller that follows the life of the protagonist, Lana, in the wake of her brother’s untimely death. Alexandra is a phenomenal writer and I had a wonderful time collaborating with her previously on Her Story 2016 so I couldn’t be more thrilled to welcome her back today. Because The Telling is a story about stories, please read on to discover a guest post by Alexandra about literary mashups she would love to see, as well as an opportunity to win a copy of The Telling and related swag! 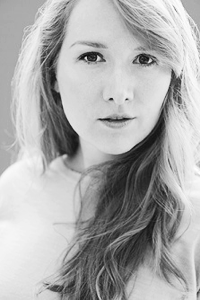 Alexandra Sirowy is the author of the The Creeping and the upcoming young adult thriller, The Telling, from Simon & Schuster BFYR. When Alexandra isn’t writing she enjoys traveling, eating, cooking, reading, music, and exploring the foothills and forests near the Northern California home she shares with her husband and their dog.

I’m a big fan of storytelling that defies genres. Better yet, if the book, movie, or TV series fits into more than one genre. I just finished binge-watching Netflix’s Stranger Things, which (pinch me) turned out to be an amalgamation of the 80s, Stephen King, a suspenseful mystery, paranormal horror, and a quirky, loyal ensemble-cast that reminded me of Super 8 or the cult classic The Goonies. It’s a fantastic example of the kind of art and entertainment that gets my blood pumping.

When I sat down to write The Telling there were multiple threads, loosely inspired by art, books, music, folklore, and plays, that I wanted to braid into one. It’s a rare manuscript that is inspired by Gothic Horror – think Wuthering Heights and Jane Eyre – nursery rhymes, Shakespeare, bedtime fables my grandmother told, and dark, Norwegian thrillers.

The Telling is a story about the power of storytelling. The protagonists, stepsister Lana and stepbrother Ben, told dark fairytales in their blanket forts as little kids. No matter the plots, crimes, and villains, they cast themselves as heroes. Fast forward to seventeen-year-old Lana witnessing Ben’s mysterious murder. What follows on their seemingly-idyllic island of Gant is surreal, elements of horrific fantasy bleeding into reality. Lana sets out to become the hero of her imagination.

During particularly stressful times of the drafting process, I like to play a little game and think up literary mashups and the genre-bending marriages of existing stories, no matter their medium. It helps me hit refresh when my brain’s tired. And since The Telling has lots of influences, sharing my top 5 favorite mashups seems appropriate.

1. Little Women meets David Bowie’s Labyrinth: Nix the creepy puppets and add a band of sisters willing to walk through a creepy hell-scape of a labyrinth to save one another and you’d have me hooked. I love books that explore the bonds of sisterhood and there aren’t enough of them.

2. Nancy Drew meets any Dystopian YA novel: I’d love for Nancy to be more of an anti-hero, more of a badass in the style of AND I DARKEN’s heroine. Let’s let Nancy solve mysteries as the world is falling apart.

4. The Podcast Serial meets Elizabethan England: Think Shakespeare in love with intrigue, murder, and a wrongly accused protagonist. This has been one of my favorite brain teasers to think my way through.

5. An all-female cast for The Goonies meets Mean Girls: Imagine, a motley group of girls hunting pirate treasure underground with the snark and hilarity of Mean Girls. 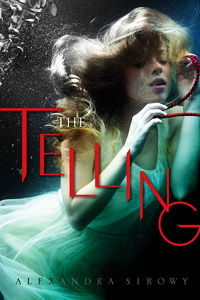 Lana used to know what was real.

That was before, when her life was small and quiet. Her golden stepbrother, Ben, was alive. She could only dream about bonfiring with the populars. Their wooded island home was idyllic, she could tell the truth from lies, and Ben’s childhood stories were firmly in her imagination.

After has Lana boldly kissing her crush, jumping into the water from too high up, living with nerve and mischief. But after also has horrors, deaths that only make sense in fairy tales and terrors from a past Lana thought long forgotten:

As an extra special bonus, Alexandra has been generous enough to offer one lucky reader the chance to win a copy of The Telling as well as related swag! This contest is open to U.S. and Canadian residents only. Please fill out the Rafflecopter form below to enter!

Don’t forget to visit all the wonderful stops along The Telling blog tour for a variety of guest posts, giveaways, and much, much more!