Book Review: Get A Grip, Vivy Cohen! by Sarah Kapit

Please Note: I received a physical copy and was monetarily compensated in exchange for reading and reviewing the book below. This compensation in no way affected my opinions or review. 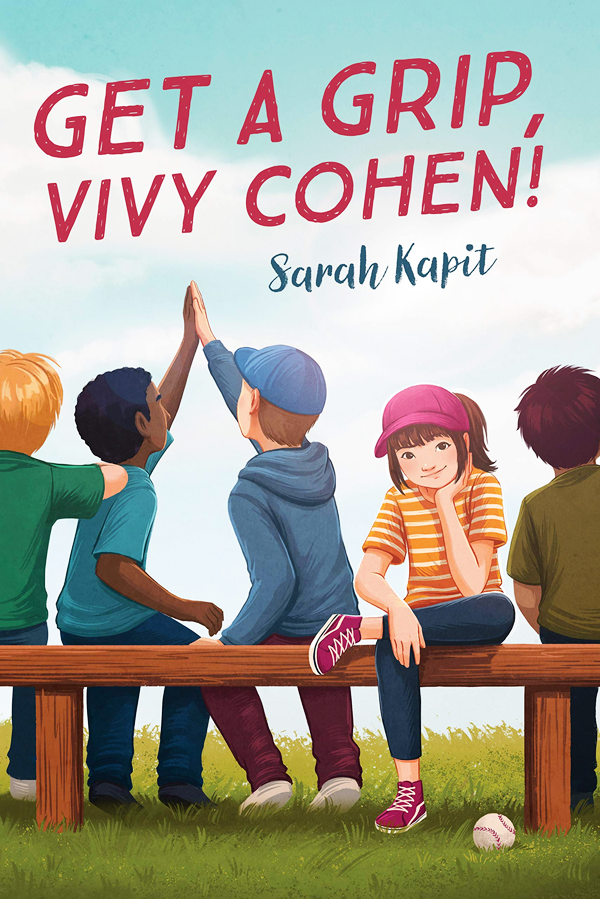 In this perfectly pitched novel-in-letters, autistic eleven-year-old Vivy Cohen won’t let anything stop her from playing baseball – not when she has a major-league star as her pen pal.

Vivy Cohen is determined. She’s had enough of playing catch in the park. She’s ready to pitch for a real baseball team.

But Vivy’s mom is worried about Vivy being the only girl on the team, and the only autistic kid. She wants Vivy to forget about pitching, but Vivy won’t give up. When her social skills teacher makes her write a letter to someone, Vivy knows exactly who to choose: her hero, Major League pitcher VJ Capello. Then two amazing things happen: A coach sees Vivy’s amazing knuckleball and invites her to join his team. And VJ starts writing back!

Now Vivy is a full-fledged pitcher, with a catcher as a new best friend and a steady stream of advice from VJ. But when a big accident puts her back on the bench, Vivy has to fight to stay on the team.

“I don’t know if I can be the first girl in the major leagues. (…) For now I will just keep throwing knuckleballs. And they are going to be very, very knuckle-y.”

When autistic eleven-year-old Vivian ‘Vivy’ Jane Cohen is asked to write a letter to someone for her social skills group, few could have imagined that this simple correspondence would change her life forever. Vivy chooses to write to Vincent James ‘VJ’ Capello, a Black Major League Baseball player who taught Vivy the secret to his famous knuckleball during a chance meeting three years prior to the beginning of the novel. Since then, Vivy has become obsessed with perfecting her knuckleball and dreams of becoming a knuckleball pitcher and a professional baseball player, too. When Vivy’s unique talent is discovered by the coach of the Lakeview Flying Squirrels and she’s invited to join the team, her dream feels closer and more possible than ever, but she’ll be forced to confront bullying, ableism and self-doubt along the way. Will Vivy find happiness and contentment playing the sport she loves or will her mother’s doubts, a cruel teammate’s taunts and her own insecurities end her dream before it ever truly begins?

A warm, sensitive, big-hearted celebration of neurodiversity and a precocious girl whose passion and determination are sure to steal reader’s hearts, Get A Grip, Vivy Cohen! by Sarah Kapit is a moving story that touches upon universal issues like making friends, confronting bullies and self-doubt and standing up for oneself while also exploring the unique challenges faced by an individual on the autism spectrum.

Get A Grip, Vivy Cohen! is written in an epistolary format, as told through letters and emails between Vivy and VJ. This was a wonderful choice on the part of the author both because this particular writing style may make the novel more accessible to reluctant readers and because this format furthers the narrative and character development in the novel as the act of writing letters allows Vivy to learn a great deal about herself. Vivy often struggles to articulate herself verbally, but finds in writing an ease of expression previously unknown to her. However well-intentioned, Vivy’s mother’s fear for Vivy’s safety and well-being cause her to disregard Vivy’s desire to play baseball. When her mother’s anxieties threaten Vivy’s future on the team and the baseball field, Vivy writes a letter to her mom that allows her to say everything she felt too overwhelmed to articulate in-person. (“When you tell me I can’t do things because I’m a girl or because I’m autistic, it makes me feel really, really lousy. Like I’m less than other people. I know I’m not normal, but I still want to do the things that make me happy. And for me, that’s baseball.”) Letter-writing empowers Vivy and allows her to express herself in a way that makes her feel heard and understood. It also allows Vivy’s mother to better relate to and empathize with her daughter and to learn what the reader already knows: That Vivy’s voice is charming, funny, deeply-felt and a delight to spend time listening to.

Vivy’s mother’s ableism is only one of the many challenges that Vivy faces while following her dream of becoming a professional baseball player. Get A Grip, Vivy Cohen! bravely explores the many types of discrimination and microaggressions experienced by Vivy as a result of being on the autism spectrum as many of those around her are ignorant, condescending, or altogether dismissive in regard to her feelings and experiences. These moments were at turns frustrating, heartbreaking and illuminating, and it illustrates how those on the spectrum are often poorly and unfairly treated, even by those who love them most. It was discouraging to see Vivy’s mother and teammates consistently underestimate her abilities, though Vivy is ultimately able to find allies who do their best to support her, including her brother, her father, her new friend, Alex, and VJ. As a Black Major League Baseball player and also a member of a marginalized community himself, VJ has been the target of prejudice and racism and can relate to the pressure Vivy feels to ‘prove herself’ both on and off the field. While the challenges the pair faces are vastly different, VJ and Vivy are able to find in one another an empathetic ear and words of wisdom that help guide them through their respective darkest moments. Though VJ begins as Vivy’s hero and mentor, it isn’t long before their relationship evolves into a sincere friendship, and it is this connection that lies at the heart of the novel.

Author Sarah Kapit has hit a home run with Get A Grip, Vivy Cohen!, a sweet, heartfelt, empowering and incredibly moving portrait of one girl’s quest to make her dreams come true. It was exciting to read about a female character who’s engaged in and passionate about sports, and the enthusiasm and facts Vivy shares about baseball are fun and informative without alienating those unfamiliar with or uninterested in the pastime. The novel’s exploration of both universal and unique challenges ensures Get A Grip, Vivy Cohen! offers a little something special for every reader, particularly those on the autism spectrum, who are sure to find a loveable friend in Vivy.