Please Note: I received an electronic review copy of Lola Benko, Treasure Hunter and was monetarily compensated in exchange for reading and reviewing the book in question. This compensation in no way affected my opinions. 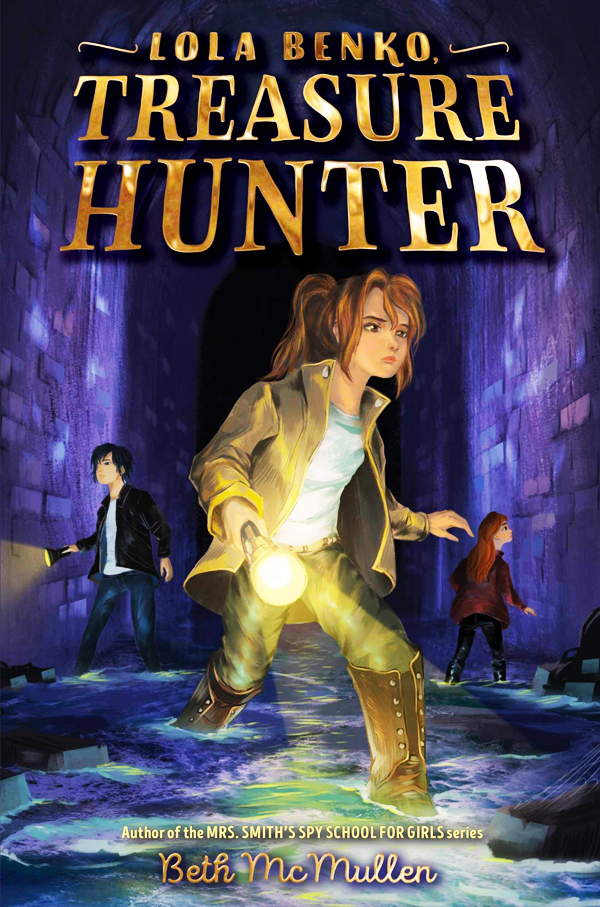 Indiana Jones meets The Lost Property Office in this action-packed mystery about a young girl searching for her father from the author of Mrs. Smith’s Spy School for Girls — the first in a new series!

Having a world-traversing archaeologist dad means twelve-year-old Lola Benko is used to moving around and not putting down roots anywhere. But every day and every hunt for something hidden is an adventure, and no matter what, she and her dad are an unbeatable team.

Then her father disappears. The official story is that he was caught in a flash flood, but Lola’s research shows the day in question was perfectly pleasant. And it will take more than empty reassurances from suspect strangers for Lola to give up on her dad. She has a feeling his disappearance has to do with a mythical stone he was studying — a stone so powerful, it could control the world. But in the wrong hands, it could end it, too…

With the help of some new friends at her school, it’s up to Lola to go on the most important hunt of her life.

“From the outside, my life looks pretty good. I travel around the world with my archaeologist father searching for lost things. Not like misplaced keys or that library book you swear you returned. No, Professor Lawrence Benko is a treasure hunter. You know, Montezuma’s gold or the plunder of the dreaded pirate Blackbeard. That kind of stuff.”

As the daughter of world-renowned archeologist and treasure hunter, Professor Lawrence Benko, twelve-year-old Lola Benko has become accustomed to a life filled with adventure and unpredictability. From Estonia to Bucharest, from Prague to Mali, Lola has learned to live life out of a suitcase and expect the unexpected as she moves from one country and one school to the next. So, when Professor Benko is called away suddenly on a ‘stupendous’ and ‘extraordinary’ expedition to Budapest, the details of which he can’t disclose, Lola doesn’t think anything of it, and is even eager to spend time in San Fransisco with her Great-Aunt Irma and Irma’s companion, a grey parrot named Zeus, while her father is away. But when news of Professor Benko’s sudden death in a flash flood is related to Lola and Irma by agents employed by the United States State Department, Lola refuses to believe it. (“I informed them they were dead wrong about my dad being, well, dead. If some tragedy befell him, I’d feel it. And I didn’t feel anything but hungry.”) Even more unbelievable and suspicious are the agent’s enquiries about Professor’s Benko’s missing expedition notebooks and their insistence he was searching for the magic Stone of Istenanya when he died. After all, the Stone is nothing more than a fictional invention, a part of a fairytale Lola’s mother used to tell her. At least, that’s what Lola’s always been told. Now it’s up to Lola, and a couple of newfound friends, to uncover the truth about her father’s disappearance and the mysterious Stone before it’s too late.

While Lola’s description of her jet-setting adventures prior to the events of the novel sound exciting, the one thing she truly longs for is the stability her unpredictable life has always lacked. Lola dreams of a room of her own with bookshelves she can fill, a birthday cake with candles she can blow out, and friends to celebrate it all with. The latter is particularly important to Lola, and has always felt the most unattainable. After all, as Lola puts it, “Who wants to be BFFs with a girl who is just going to up and leave?” Moving to San Fransisco and eventually attending the prestigious Redwood Academy allows Lola her first glimpse of normalcy, filled with STEM fair inventions, homework, and the friends she has always hoped for. This change in circumstances is anything but smooth sailing for Lola, however, as she learns she no longer has the freedom she previously enjoyed, a particularly difficult truth as Lola must balance schoolwork and the supervision and expectations of others with her continuing question to find her father. Lola is impulsive and reckless, but this is largely because she’s also loyal and brave, and willing to go to any length to help those she cares about.

Ji Wu-Rossi, who is Lola’s new friend and who the reader grows to know almost as well as Lola, is also dealing with the complexities and nuances of friendship. At the beginning of the novel, we learn that Jin’s childhood friend, Paul, has recently moved away, leaving Jin with a “best-friend-sized hole” in his life. While Jin mourns the loss of his former best friend and clearly thinks highly of Paul, the glimpses the reader is given of Jin’s dynamic with Paul make it clear this was in no way a healthy or positive relationship. Among other things, Jin reveals to Lola that “Paul used to say I trusted too much in feelings and that was bad”, “Paul always tells me my ideas are stupid.” and that “Paul yelled at me all the time”. Lola is quick to pick up on the toxicity of their relationship and the insecurities that Jin struggles with as a result, and is careful not to replicate Paul’s behaviour and is actively supportive of Jin’s ideas and the things he’s passionate about. After all, as Lola observes silently to herself, “aren’t best friends supposed to make you feel good about yourself?” It was touching to watch as two people reluctant to make friends – either for fear of rejection, judgement or the unknown – find unconditional acceptance and support in one another.

The first book in a new middle grade series, Lola Benko, Treasure Hunter lays a solid foundation for further books to come, establishing its cast of characters with clarity and giving readers an understanding of what they can expect from future instalments. The novel’s intriguing blend of mystery and adventure is sure to capture the imagination of young readers who enjoy puzzle-solving and stories of derring-do as Lola tries her hand at pilfering, escapes a sailing ship, and explores mysterious underground tunnels, each with varying degrees of success. McMullen’s unique twist on Hungarian mythology also adds a little bit of magic to a story otherwise rooted in realistic, contemporary issues faced by middle grade readers today. I don’t know what’s next in store for Lola Benko, though I would love to see the series deconstruct colonialism, which is unavoidably inherent in the practice of ‘treasure hunting’ and, in doing so, educate the next generation about the dangers of and harm caused by cultural appropriation and exploitation. There’s a great deal of potential to be found in Lola Benko, Treasure Hunter, and I would certainly be interested in tagging along with Lola, Jin and the rest of the gang on their next adventure.