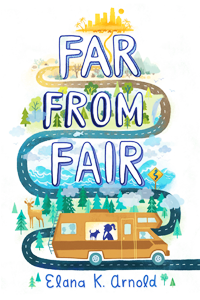 Odette Zyskowski has a list: Things That Aren’t Fair. At the very top of the list is her parents’ decision to take the family on the road in an ugly RV they’ve nicknamed the Coach. There’s nothing fair about leaving California and living in a cramped Coach with her parents and autistic brother, sharing one stupid cell phone among the four of them. And there’s definitely nothing fair about what they find when they reach Grandma Sissy’s house, hundreds of miles later.

Most days it seems as if everything in Odette’s life is far from fair. Is there a way for her to make things right?

It was the ugliest thing she had ever seen. Obnoxiously ugly. Embarrassingly ugly. Epically ugly. And it was sitting in her family’s driveway.
Actually, no. It was sitting in the Waldmans’ driveway – or, at least, what would shortly become the Waldmans’ driveway when escrow closed in a few days and the house Odette Zyskowski grew up in wouldn’t be her home anymore. That thing would be her home. That run-down, beat-up brown and brown RV that Mom and Dad had just pulled up in, honking what was intended to be a cheerful beep, but instead sounded like the mournful death cry of a desperate whale.

If there’s one thing that Odette Zyskowski knows for sure, it’s that life isn’t fair. Forced to leave behind her school, her friends, and the only home she has ever known after her father unexpectedly quits his job, sells their house and moves the family into a brown, run-down RV nicknamed the “Coach”, with no space, no privacy, and only one cell phone to share amongst the entire family, Odette’s future seems more like a life sentence than the exciting adventure her parents promise her and her younger brother, Rex. The Zyskowski family leave their old life in California behind with the intention of stopping in Orcas Island, Washington to check in on Odette’s ailing grandmother before continuing on to parts unknown. These plans are soon derailed, however, when it is revealed that Grandma Sissy’s health has been declining at a far more rapid and serious rate than initially believed. As the family come to terms with her terminal diagnosis and all that this entails, Odette will also have to contend with old friends, new crushes, and the uncertainty of the future, in a whirlwind of events that inspire her to question if what she wants is truly what she needs.

Dad promised it would be okay. He promised. As if he had that kind of authority. That kind of pull with the universe. Odette knew a lie when she heard one. How on earth could everything be okay? To Odette, it was clear as a glass of water that things were not okay. Not by a mile.

Far From Fair is the first novel I’ve read by author Elana K. Arnold but I can promise it will not be the last. A gentle but no less powerful meditation on the complexities of grief, the nature of friendship, the bonds of family, and the meaning of home, Arnold’s latest publication is the sort of novel that nestles deep beneath a reader’s skin and takes up permanent residence in their heart. Mature, thoughtful and challenging, Far From Fair is a novel that could stand proudly amongst the very best of its peers and is a compelling reminder of why I continue to read middle grade literature well into adulthood.

And it was nice, in that moment, with the neighbours and Mieko, and Mom honking and Rex all excited across from her. But then they turned the corner at the end of the street, toward the highway, and of course Mieko couldn’t follow, and the neighbours’ cheers faded away, and even Rex and the rat dog settled down, and then it was quiet except for the engine, and there was nothing but the impossibly long road still to come.

In Far From Fair, Elana K. Arnold makes a number of daring authorial choices, not the least of which can be found in the characterization of the novel’s protagonist, twelve-year-old Odette Zyskowski. A young girl struggling to find stability in the wake of immense physical and emotional upheaval, Odette is sullen, rancorous, frustrated, and angry, and she has every right to be. Powerless to escape or change her family’s new nomadic existence and resentful of her younger brother, Rex, whose unpredictable ‘furies’ monopolize a great deal of her parent’s time and attention, Odette rebels against the many forces outside of her control and attempts to make herself as unlovable as she feels unloved. The author’s accurate and accessible portrayal of Odette’s maelstrom of emotion, as well as the character’s own insight into her behaviour, create a vulnerable and thoroughly sympathetic character. Far From Fair‘s exploration of this is fearless and unvarnished, delving deeply into the darker and less palatable aspects of human nature with which we are all familiar, but which are rarely illustrated in children’s literature with such unflinching honesty and eloquence.

“This is the summit!” Mom sounded happy. Relieved, maybe, that the Coach had made it to the top of the Grapevine.
“It’s all downhill from here,” Dad said.
Quietly, to herself, Odette whispered, “That’s what I’m afraid of.”

Far From Fair is unafraid to touch upon difficult issues that will no doubt prove relevant to young readers, including (but not limited to) financial instability, marital and familial discord, mental illness, grief, and physician-assisted suicide. Seen through the eyes of the perceptive and vulnerable Odette, each are explored with care and sensitivity, and while there are a great many valuable lessons to be drawn from Odette’s story, Far From Fair never appears sanctimonious or proselytizing. Much of the novel’s most universal messages are expressed through the kind and comforting voice of Grandma Sissy, whose homespun wisdom never fails to put a positive, hopeful spin on even the most dark and discouraging of situations. From surviving adversity (“The best way out is always through.“) to the importance of taking chances and seizing the moment (“In my experience, it’s better to feel foolish now than to feel sorry later.“), Arnold trusts young readers to deconstruct these issues and draw their own conclusions. Despite the weight, solemnity and importance of the subject matter being discussed, however, the issues raised within Far From Fair never feel oppressive or insurmountable. Ultimately, Arnold’s narrative is hopeful and heartening, emphasizing the possibility and promise of tomorrow and the power of new beginnings.

“Grandma Sissy liked to say that fair didn’t mean even. Fair means everyone getting what they need, not everyone getting the same thing.
Odette didn’t have anything to say to this, so she shrugged.
Then Mom said, “What do you need, Detters?”

From phenomenally talented middle grade and young adult author Elana K. Arnold comes a new novel about the anxieties of adolescence and the unfair universal truths with which we must all contend. Whether she’s exploring the loss of one’s home or a beloved family member, Arnold’s incisive eye and fearless storytelling are sure to resonate with readers who can draw comfort and hope from the book’s underlying, optimistic conclusions. Authentic in voice and profound in message, Far From Fair is a novel I would not hesitate to press into the hands of readers of all ages.

● Jess @ The Reading Nook Reviews wrote “Far From Fair ​is beautiful middle grade novel that dissects the challenges of growing up, especially when you’re forced to leave the only life you’ve ever known.” (Read the rest of the review Here!)

● YAYOMG! wrote “Despite the sad themes throughout the book, it’s handled in a very hopeful and sincere way. It will most likely make you cry, but it will also make you feel better, and even change the way you see the world when things seem unfair in your own life.” (Read the rest of the review Here!)

● GTC @ Books For Kids Blog wrote “Elana K. Arnold’s latest, Far from Fair is a book about loss and endings, but more than loss, it is about beginnings, two sides of the same door, as Grandma Sissy said, and Odette and her family are able to see something good ahead through that door.” (Read the rest of the review Here!)