Child’s Play Review: Some Kind Of Happiness by Claire Legrand 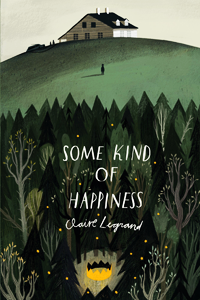 • Her parents, who are having problems. (But they pretend like they’re not.)
• Being sent to her grandparents’ house for the summer.
• Never having met said grandparents.
• Her blue days — when life feels overwhelming, and it’s hard to keep her head up. (This happens a lot.)

Finley’s only retreat is the Everwood, a forest kingdom that exists in the pages of her notebook. Until she discovers the endless woods behind her grandparents’ house and realizes the Everwood is real – and holds more mysteries than she’d ever imagined, including a family of pirates that she isn’t allowed to talk to, trees covered in ash, and a strange old wizard living in a house made of bones.

With the help of her cousins, Finley sets out on a mission to save the dying Everwood and uncover its secrets. But as the mysteries pile up and the frightening sadness inside her grows, Finley realizes that if she wants to save the Everwood, she’ll first have to save herself.

She is coming, whistled the Everwood winds.
She is coming, rustled the Everwood leaves.
“Who?” the creatures of the forest asked. “Who is coming?”
The little orphan girl, groaned the trees. She carries a great sadness inside her. We must put our hope in her nevertheless.
And the guardians stood at the edge of the wood and gazed into the sun, waiting.

Eleven-year-old Finley Hart has a secret. Two, actually. The first is the magical forest of Everwood, a fantastical world of Finley’s own creation whose stories she inscribes in a series of notebooks. The second is the the crushing, suffocating weight of the ‘darkness’ she keeps carefully hidden inside typified by the `blue days` during which even the simplest task feels impossible. This ever-present anxiety and depression from which Finley uses Everwood as a respite is, paradoxically, as familiar and as inexplicable to Finley as any aspect of her life. When Finley is sent to reside at Hart House with her grandparents and the extended family she has never known while her parents work on their marital difficulties, she does so with no small amount of trepidation. A stranger in a strange land, Finley initially struggles to adjust to life at Hart House, where even meals are an intricate ritual akin to a carefully-choreographed dance whose steps she’s ignorant of. As she becomes better acquainted with Hart House and its inhabitants, however, it quickly becomes clear that Finley Hart is not the only one with secrets.

I hear whispers, bare feet slapping on wood floors, bodies moving throughout the house. Some of my cousins are following us. Some of them scamper away and others take their place. I see adult women. My three aunts.
There are smiles, and hugs that are honestly painful to me because I’m not accustomed to strangers invading my personal space.
The Harts are a storm, and I am its bewildered eye.

“How can the world look so perfect when I feel so broken?” In Some Kind Of Happiness, Claire Legrand offers a poignant portrait of depression and anxiety as seen through the eyes of her lost, unsure, and vulnerable eleven-year-old protagonist, Finley Hart. Readers of all ages will fall in love with Finley not in spite of these issues, however, but because of them. In fact, it is often during Finley’s darkest moments that she is able to shine most brightly as Finley navigates the world around her with a quiet resilience, selfless sacrifice and fierce love and loyalty for her family and friends that belie an admirable inner strength and fortitude. A character with the innocence and naïveté of a child and the wisdom and experience of someone far beyond her years, Finley is a character who contains multitudes. In her delicate and meticulous exploration of her primary character, Legrand not only demonstrates an intimate understanding of the physical and psychological symptoms of anxiety and depression – the uncertainty, the claustrophobia, the shame, the isolation, the loneliness, etc – but also the stigma associated with mental illness as a whole. Throughout the novel Finley desperately attempts to hide her anxiety and depression from those around her, worried about burdening her loved ones with the truth and admitting that there is an inexplicable, indescribable ‘darkness’ inside of her that marks Finley as different from those around her. Despite this deeply moving and emotional inner conflict, however, the author is also careful to dispel many of these and other harmful misconceptions associated with mental illness as Finley ultimately confesses to, and seeks help for, her anxiety and depression. The author’s deeply empathetic, thoughtful and sensitive exploration of Finley’s underlying issues are also sure to offer a great deal of comfort to younger readers who do not yet have the ability to fully understand or articulate the feelings of anxiety and depression they too are suffering from.

Once she leaves the room, I lie flat and stare at the chandelier above my bed. This is a room for a princess, and I am anything but that.
What am I?
A lump of heaviness. A stranger. A thing that does not fit.

Some Kind Of Happiness is ultimately divided into two separate, but interconnected, narratives: Finley’s story, which is told from a first-person perspective, and the story of the Everwood, which is told from a third person perspective. These two complex, intricately crafted stories dovetail perfectly with one another as Legrand seamlessly switches from one to the other and back again. Each are easily distinguishable with their own voice, tone and font treatment and add greater depth and dimension to an already phenomenal tale. As the novel progresses, it eventually becomes clear that the Everwood, a fictitious world of Finley’s own creation, acts as a fantastical re-imagining of the events in Finley’s own life and is an allegorical story that runs parallel to that of Finley’s own. The Everwood allows Finley to process and better understand the world around her and promises to provide the same opportunity for younger readers who might find nuanced issues of mental illness more accessible and easier to explore in an abstract iteration as opposed to a strictly contemporary narrative. Finley’s reliance on the Everwood also demonstrates the positive role creative expression can have in confronting and deconstructing otherwise difficult issues in a safe space. That said, Legrand is always careful to differentiate between using such methods as a coping mechanism as opposed to as a means of escaping one’s problems, and ultimately emphasizes the importance of therapy and open, honest discussion in banishing harmful attitudes and stereotypes about mental illness. Some Kind Of Happiness also offers a quiet meditation on issues of grief, divorce, substance abuse and moral responsibility, all of which are explored with a great deal of care and sensitivity.

I suppose most things in a person’s life are good for a while, even if that doesn’t last very long.
Maybe that is why, even after something has gone wrong, we spend so much time trying to fix it.
Because we remember when it wasn’t broken.

Mature. Sincere. Inspiring. Heartwarming. To quote Some Kind Of Happiness, none of these words quite work, because Claire Legrand’s latest is all of these things at once, and so much more. In addition to being a thoroughly enjoyable and unforgettable story, Some Kind Of Happiness also acts as an excellent resource for sufferers of anxiety and depression and readers who wish to better understand and empathize with those who do. Genre-defying in its format and awe-inspiring in its complexity, creativity and gentle exploration of mental illness, this middle grade novel filled with pirates, knights, witches and magical woods seamlessly unifies fantasy and reality to masterfully extract the best of both possible worlds. Some Kind Of Happiness is the story I desperately longed for as a lost, anxious, unsure child but whose ageless wisdom is as valuable and beneficial to me today, at twenty-eight, as it would have been at twelve. Sensitive, insightful, exquisite stories like Some Kind Of Happiness are an essential tool in helping to encourage greater empathy, compassion and understanding in the readers of today and the leaders of tomorrow. Recently selected by Publisher’s Weekly as one of the best middle grade novels of 2016, Some Kind Of Happiness is one of the most thoughtful and nuanced middle grade novels I’ve read in this or any other year.

● Debby @ Snuggly Oranges wrote “Some Kind Of Happiness is charming, thoughtful, heartwarming, and important. ” (Read the rest of the review Here!)

● Cee @ The Novel Hermit wrote “Say yes to Some Kind Of Happiness, to Finley Hart, to the Everwood, to Claire Legrand! Let it sweep you off your feet!” (Read the rest of the review Here!)

● Jessica @ Cracking The Cover wrote “There’s a magic to Some Kind Of Happiness that goes beyond Everwood. The magic comes in Claire Legrand’s writing.” (Read the rest of the review Here!)