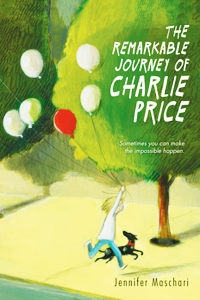 Ever since twelve-year-old Charlie Price’s mom died, he feels like his world has been split into two parts. Before included stargazing and Mathletes and Saturday scavenger hunts with his family. After means a dad who’s completely checked out, comically bad dinners, and grief group that’s anything but helpful. It seems like losing Mom meant losing everything else he loved, too.

Just when Charlie thinks things can’t get any worse, his sister, Imogen, starts acting erratically — missing school and making up lies about their mother. But everything changes when one day he follows her down a secret passageway in the middle of her bedroom and sees for himself.

Imogen has found a parallel world where Mom is alive!

There’s hot cocoa and Scrabble and scavenger hunts again and everything is perfect…at first. But something doesn’t feel right. Whenever Charlie returns to the real world, things are different, and not in a good way. And Imogen wants to spend more and more time on the other side. It’s almost as if she wants to leave the real world for good. If Charlie doesn’t uncover the truth, he could lose himself, the true memory of their mother, and Imogen…forever.

Mom knew how much Charlie loved math. And he really did. Sure the competitions were fun and exciting and they always saw who could eat the most pizza afterward (normally Rohan). But what he loved most was how logical math was. Two plus two equaled four. A triangle always had three sides. The quadratic formula was always the same. It made sense.
And even though Mom wasn’t here to cheer him on and he couldn’t quite depend on Dad to actually put an apple in his lunch, two plus two still equaled four.
Math was something Charlie could count on.

Twelve-year-old Charlie Price is having a very difficult year. His mother is dead, his best friend, Frank, has disappeared, and even things that once brought him joy, like Mathletes, can’t quite quiet the sadness and anger that seem to bubble just beneath the surface of his skin. Lost and alone, Charlie is consumed by grief until an unexpected discovery beneath his sister Imogen’s bed transports the two into a world far beyond their wildest dreams. A world in which their mother is still alive. Suddenly, the things that Charlie missed most – the comfort of her embrace, the warmth of her smile, the familiar tang of her spaghetti sauce – are within reach again. Charlie treasures these secret, stolen moments with the mother he thought lost to him forever, but can’t help but grow concerned as memories fade, secrets are revealed, and the line between the two realities begins to blur. It will take all of Charlie’s cunning, daring, and heart, along with the help of his friend, Elliot, and his adorable canine companion, Ruby, to rescue Imogen from the clutches of this mysterious other world before it’s too late.

Dear Mom, I get so sick of everyone asking how I’m doing. How do they think I’m doing? Love, Charlie.

Dear Mom, You died and all I got was this stupid support group with this lady who thinks that she knows how I feel and she doesn’t. Love, Charlie.

In the interest of full disclosure, I will begin this review by sharing that I have the immense pleasure of calling Jennifer Maschari my friend. Over the past two years Jennifer has offered me kindness, support and friendship for which I’ll forever be grateful. Before that, however, there was the promise of Charlie Price. I first stumbled upon The Remarkable Journey Of Charlie Price on Goodreads in 2014 and I knew in an instant that I had discovered something special. It was over a discussion of her debut novel (and a shared love of Reese’s Peanut Butter Cups) that we first bonded. But even if we have never spoken, even if I were not lucky enough to call Jennifer my friend, I would not hesitate to declare The Remarkable Journey Of Charlie Price one of the best middle grade books I have had the privilege of reading in this or any other year. In a world populated by hidden doors, secret worlds and miraculous magic, The Remarkable Journey Of Charlie Price reminds us that it is the things we often take for granted – family, friendship, love, and even life itself – that are the most extraordinary of all. Rich, mature, insightful and absolutely enthralling, you will never again believe that middle grade literature is ‘just for kids’.

“I told you! I told you, Charlie,” Imogen said. Her arm began to swing, taking his with it. “I knew you’d come find me. Do you believe me now?”
And all at once he couldn’t breathe. He couldn’t think. Everything he knew about anything flew out the window and took his brain and heart and voice with it.
Finally, a word came. “Mom?”

From moments of uncontrollable anger to quiet reticence and introspection, the vast spectrum of Charlie’s emotion in the wake of significant and unimaginable loss is exquisitely well-rendered with an earnest sincerity that cannot fail to move even the most hardened reader. The author reconciles these seemingly disparate elements of Charlie’s personality with ease, exploring both his innocence and intense vulnerability in the wake of his mother’s death, as well as his desperate bravado in a heart-wrenching portrait of a child struggling to hold his family together and make sense of something as senseless as losing a parent at such a young age. This insightful character study is not exclusive to Charlie. The secondary characters add another much-appreciated layer of depth to the story as Maschari examines how grief manifests differently in every individual. Charlie’s father becomes consumed with work. Imogen retreats into a land of imagination and fantasy. Elliot over-schedules herself to remain focused on other things. The Remarkable Journey Of Charlie Price reminds readers that there is no ‘right’ way to grieve and that the journey toward healing and acceptance is an extremely personal one.

For Charlie it was as if the rotation of the earth had picked up speed and he was losing his grip – on Dad, on Imogen, on Mathletes, on everything he loved. One false move, one little slip, and Charlie felt he’d lose his balance and go flying out into space. And he couldn’t help but think that the one difference, the one change, was seeing Mom again.

Death is one of the few, universal truths which we all must face. Jennifer Maschari explores this topic with grace and sensitivity, allowing young readers to examine complex issues of loss and grief in a safe space. Confronting one’s mortality can be a terrifying and overwhelming undertaking. There is, however, an undeniable comfort and beauty in the author’s unique interpretation that I have rarely had the pleasure of experiencing before. The Remarkable Journey Of Charlie Price acts as a touching reminder that to grieve is to remember that we have lived well, and loved well, and that those who are gone are never truly lost or forgotten. Charlie and Imogen need not visit the hidden world beneath Imogen’s bed in order to be close to their mother, because she continues to live on in their memories and in their hearts. Jennifer Maschari emphasizes that to honour the dead is not to sacrifice our life for theirs but to live our lives to the fullest extent in order to honour those who may not. While the author’s touching exploration of these themes is sure to resonate with readers of all ages and personal histories, The Remarkable Journey Of Charlie Price would make a particularly precious and important gift for young readers suffering from a significant loss like Charlie’s, from whom they could draw a great deal of comfort. Maschari’s use of description is lush and evocative, allowing readers to traverse everything from the familiar landscape of a middle school classroom to a magical alternate reality with ease. Even something as benign as a description of a dog – Imogen always said it looked like Ruby had been dusted with powdered sugar. Charlie thought she looked like she had been sprinkled with stars. – becomes a line of delicate poetry in this author’s very capable hands. The Remarkable Journey Of Charlie Price achieves the perfect balance of the real and the fantastical, blending realistic issues and a contemporary setting with magical, otherworldly elements and in doing so demonstrating a versatility sure to appeal to young readers with a variety of tastes.

“Magic,” she whispered. Charlie agreed. He had once thought that magic died when Mom did. Maybe the good kind. But this bad magic – the kind he was dealing with now. The kind that stole Imogen. It didn’t die.
It woke up.

Gentle, compassionate and imaginative, The Remarkable Journey Of Charlie Price is a quiet but no less powerful reflection on the importance of honouring the memories of our past and embracing the endless possibility of our future. In her poignant and tremendously intelligent middle grade debut, author Jennifer Maschari has crafted an exquisite novel which audiences will have the ability to grow into, instead of out of. Younger readers will have a great deal of fun enjoying the magical rescue mission on which Charlie eventually embarks, while older readers will appreciate the profundity of the novel’s more subtle, complex meditation on death and mourning. In an age where so few things are exactly as advertised, Jennifer Maschari’s 2016 middle grade debut truly is nothing short of remarkable.

PLEASE NOTE: All quotations included in this review have been taken from an advanced reader copy and therefore might be subject to change.

● Jenn Bishop wrote “Maschari’s story is poignant without ever becoming saccharine. A powerful exploration of grief, memory, and family.” (Read the rest of the review Here!)

● Michele @ Mrs. Knott’s Book Nook wrote “What a strong debut from author Jennifer Maschari. I’m looking forward to sharing The Remarkable Journey Of Charlie Price with many readers and reading future books by Jennifer!” (Read the rest of the review Here!)

● Christina @ Confessions Of A Book Addict wrote “Jennifer Maschari’s debut, The Remarkable Journey Of Charlie Price, is a heartfelt middle grade read. It had me laughing one minute, crying the next, and then tugging on my heart strings.” (Read the rest of the review Here!)