Child’s Play is a regular feature on Pop! Goes The Reader in which I review picture books, chapters books, and middle grade books for the young and the young at heart. 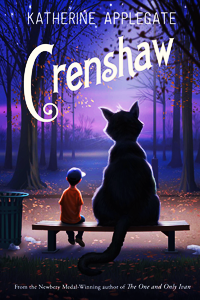 In her first novel since winning the Newbery Medal, Katherine Applegate delivers an unforgettable and magical story about family, friendship, and resilience.

Jackson and his family have fallen on hard times. There’s no more money for rent. And not much for food, either. His parents, his little sister, and their dog may have to live in their minivan. Again.

Crenshaw is a cat. He’s large, he’s outspoken, and he’s imaginary. He has come back into Jackson’s life to help him. But is an imaginary friend enough to save this family from losing everything?

Jackson is not the sort of boy to have an imaginary friend. He’s an aspiring scientist, after all, and they rely on facts and figures, not flights of fancy and imagination. Just don’t tell that to Crenshaw, the invisible surfboarding-riding, bumbershoot-toting, bubblebath-loving tuxedo cat that only he can see. What was once a treasured childhood secret quickly becomes an object of concern for Jackson, however, when Crenshaw makes a sudden and unexpected reappearance in his life after a protracted absence. Not only because Jackson is now older – how old is too old to have an imaginary friend, anyway? – but because it confirms his worst fears that history has begun to repeat itself. The arguments. The poverty. The moving. And, quite possibly, the homelessness, too. As Jackson navigates a reality increasingly defined by its turbulence and uncertainty, he will soon find that a little magic, and a little imagination, can make all the difference.

Crenshaw had excellent timing. He came into my life just when I needed him to.
It was a good time to have a friend, even if he was imaginary.

There are some books that remain with you long after you turn the final page, that burrow beneath your skin and nestle deeply inside your soul. Crenshaw by Katherine Applegate is one such story. Heartbreaking and hopeful, enchanting and wondrous, there is little doubt that this former winner of the Newbery Award has done it again. In her latest release for a middle grade audience, Applegate guides readers on a journey sure to engender empathy and understanding as she helps them confront difficult, but no less important, truths about poverty and homelessness. In the wake of a much larger dialogue about the importance of diversity and inclusivity in children’s literature, Crenshaw is a valuable addition to the conversation, touching upon an experience not often explored in the YA and MG markets.

Jackson could best be described as an ‘old soul’, a child filled with a quiet dignity and strength of character born of knowledge and experience that extends far beyond his modest age. Although Jackson’s parents make a valiant effort to shield he and his younger sister, Robin, from the true severity of their situation, pretending it’s a grand adventure instead, Jackson isn’t fooled. He’s perceptive enough to recognize the gnawing hunger in the pit of his stomach – best staved off by a trusty game of ‘Cerealball’ – and his parent’s increasing arguments as familiar warning sign of things to come. Whether he’s reacting with resilience and quiet bravery or resentment and abject fear, readers can’t help but appreciate the emotional honesty and authenticity inherent in Jackson’s portrayal. Applegate is careful not to patronize her audience, trusting young readers to grasp the lessons conveyed about truth, unconditional love, and the everyday magic of imagination most often imparted by Crenshaw, Jackson’s weird, wonderful and wise imaginary friend. Another important relationship in Jackson’s life is that which he has with his best friend, Marisol. Though she makes few physical appearances throughout the novel, her presence is powerfully felt, providing a perfect counterbalance of whimsy, optimism and imagination to Jackson’s steadfast reliance on facts, logic and reason.

Swanlake village wasn’t a fancy place at all, just a regular old neighbourhood. But it was friendly. It was the kind of place where you could smell hot dogs and burgers grilling every weekend. Where kids rode their scooters on the sidewalk and sold lousy lemonade for a quarter a cup. It was a place where you had friends you could count on, like Marisol.
You wouldn’t have thought it was a place where people were worried or hungry or sad.
Our school librarian likes to say you can’t judge a book by its cover. Maybe it’s the same way with neighbourhoods. Maybe you can’t judge a place by its swans.

Though relatively short in length, Crenshaw‘s ambition and the importance of the messages it conveys to young readers should not to be underestimated. In the novel, Applegate explores topics including poverty, homelessness and chronic illness with realism and sensitivity. Due to the weight and seriousness of the subject matter, however, the author is also careful to temper each of these with hope, love, imagination, and wonder, which allow readers to explore these in a safe and healthy manner. Moreover, simply because these issues might prove difficult to discuss about makes them no less important, or relevant, to today’s readers. In telling Jackson’s story, Applegate is relating a situation that will be all too familiar to many, where circumstances beyond a family’s control leave them struggling to find a measure of comfort and security in a situation they were never taught to expect or plan for. The author provides no easy answers or trite solutions, focusing instead on a nuanced, compelling exploration of Jackson’s feelings and the impact it has on the family as a whole. Practically-speaking, each chapter is brief, spanning no more than four or five pages. This, in combination with Applegate’s evocative and humourous narrative voice, make Crenshaw an easy, engrossing read that children can devour in a matter of hours.

Providing the perfect equilibrium between truth and realism and magic and imagination, Crenshaw is a sobering reminder that Jackson’s situation is neither as rare nor as simple as one might assume. Despite its often difficult subject matter, however, the author is also careful to craft a narrative full of hope and wonder, should the reader only be willing to see it. Poignant, heartwarming, and ultimately inspiring, Katherine Applegate’s latest is a powerful testament to the resilience of the human spirit and promises to be a classic for a new generation of readers young and old alike. I guess you might even say it’s the cat’s meow. Right, Crenshaw?

● Heidi @ Geo Librarian wrote “I can highly recommend this book as a sweet story, beautifully told, but also a powerful look at an issue that all too many children are familiar with.” (Read the rest of the review Here!)

● Jody @ Kinderlit Canada wrote “Applegate is a phenomenal writer, with a marvelously deft touch; she walks a very thin line between the realistic and the melodramatic, never allowing things to become too heavy nor too light.” (Read the rest of the review Here!)

● Michelle @ Michelle and Leslie’s Book Picks wrote “Crenshaw is a compelling, necessary read. It’s a realistic look at child hunger and poverty, and brings home the message that we don’t have to look far – they are in our communities, in our neighborhoods and maybe our friends.” (Read the rest of the review Here!)