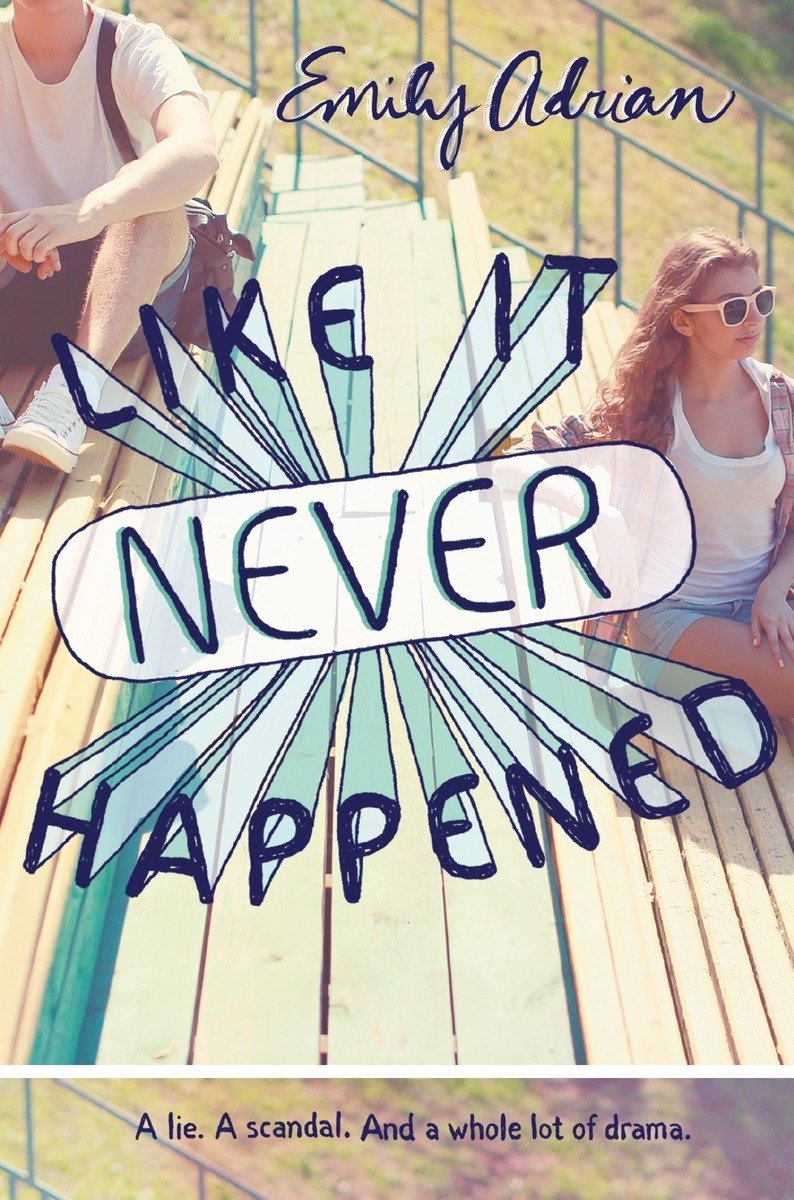 Stereotypes, sexuality, and destructive rumors collide in this smart YA novel for fans of Sara Zarr’s Story of a Girl, Siobhan Vivian’s The List, and E. Lockhart’s The Disreputable History of Frankie Landau-Banks.

When Rebecca Rivers lands the lead in her school’s production of The Crucible, she gets to change roles in real life, too. She casts off her old reputation, grows close with her four rowdy cast-mates, and kisses the extremely handsome Charlie Lamb onstage. Even Mr. McFadden, the play’s critical director, can find no fault with Rebecca.

Though “The Essential Five” vow never to date each other, Rebecca can’t help her feelings for Charlie, leaving her both conflicted and lovestruck. But the on and off-stage drama of the cast is eclipsed by a life-altering accusation that threatens to destroy everything…even if some of it is just make believe.

We, the five essential members of the Thespian Troupe Of Bickford Park Alternative School of the city of Portland, solemnly swear to never kiss, grope, fondle, lick, caress, court, woo, seduce, or otherwise date each other. Should any actor develop unseemly feelings for one of his/her four costars, he/she will sacrifice his/her desires for his/her love of the stage and for the collective artistic potential of Rebecca Rivers, Charlie Lamb, Tim Li, Tess Dunham, and Liane Gallagher. The foregoing pact is hereby consented to by the five essential members of the Thespian Troupe as evidenced by their signatures hereto.

All the world’s a stage, and all the men and women merely players. At least, that’s certainly the case for Rebecca Rivers and the four other members of the ‘Essential Five’, a tight-knit drama troupe brought together by a shared, single-minded passion for acting. Or should I say drama? Forged together in the fires of terrifying tenth grade auditions and the mercurial and exacting standards of their drama teacher, Mr. McFadden, the Essential Five quickly become a unified force, an incestuous, isolated, island unto themselves. As feelings shift and their once-simple declaration to remain true to their craft is tested, however, memorizing their lines and remembering their cues will soon become the least of their worries. In her insightful debut, Adrian reminds of us the complexity of human relationships, the vast spectrum of sexuality, and how closely life often imitates art in a masterful exploration of the secrets we keep, the lies we tell, the roles we play, and how quickly it can all fall apart.

Admittedly, I adored Charlie. Touching his skin – even by accident – was the best thing that happened on a regular basis. But most likely he only flirted with me because he knew he would never have to follow through.
The pact might have been Charlie’s idea, but the rest of us had signed our names for a reason.

Novels like Like It Never Happened are the reason I became a book blogger. Rapidly expanding and increasingly competitive, the young adult literary market is one in which visibility is at a premium. As a result, we’re beginning to see the implementation of increasingly elaborate (and often expensive) promotional campaigns in order to achieve just that. But as we celebrate the new releases from Dessen and Dennard, Roth and Riordan, it’s all too easy to lose sight of the equally compelling and powerful, but often overshadowed, mid-list titles. The novels that are not necessarily backed by the full might of the publisher’s marketing machine, but which are no less memorable or important. I’ll be discussing one such title today. I was first made aware of Emily Adrian’s 2015 debut when I received one of the quarterly catalogues from Penguin Canada, detailing the forthcoming titles that would be published in the following season and were currently available for review. While I refrained from requesting a copy, wary of my ever-growing to-be-read list and prior commitments, I knew that Like It Never Happened was a novel I wouldn’t soon forget and quickly pre-ordered a finished copy. And, a little over a month post-publication, I began reading and promptly fell in love. Were it up to me, Like It Never Happened would never be over-looked again.

The truth was that nobody had ever kissed me when it wasn’t explicitly written into the script. Even last summer, the whole thing had been orchestrated not-so-masterfully by Tess. And it didn’t count, because after every kiss I had begged the boy to stop.
And that was really the last thing I wanted to remember.

A safe space. That’s what Rebecca Rivers seeks each time she takes to the stage of Bickford Park Alternative School. A refuge. From her mother’s interference. Her sister’s noticeable absence. Her classmates’ malicious gossip. The uncertainty of her future. She doesn’t have to be that Rebecca, whose life is scored by a soundtrack of whispers and catcalls. Instead, on stage she can command the lead in the play. She can be Abigail Williams in The Crucible. Holly Golightly in Breakfast At Tiffany’s. Blanche DuBois in A Streetcar Named Desire. She can be bold, beautiful and brave, buoyed by the support of Mr. McFadden, whose praise is made all the more special because of its relative rarity. Dissension and resentment amongst the group begins to fester, however, as McFadden’s increasing demands and capricious temperament cause the Essential Five to fracture from within with unexpected, and dramatic, results. Adrian’s thoughtful exploration of group dynamics and relationships – familial, romantic, platonic, or professional – is rich and compelling, spurning the reader on as the real life drama becomes as fraught and complex off-stage as it is on.

Girls your age always think they will be rewarded for destroying themselves. And if that’s what you believe, it’s not your fault. But it also isn’t true.

In the hands of a less capable writer, a cast of this magnitude has the potential of becoming unwieldy, unfocused and confusing. Under the direction of accomplished debut author Emily Adrian, however, each character from the primary to the most periphery are distinct, fully-realized, and easily distinguishable from one another. Every single individual, from Rebecca and the members of the Essential Five to Mr. McFadden and the assorted members of Rebecca’s family, demonstrate the author’s clear, concise vision and impeccable execution of such. Even Rebecca’s elder sister Mary, who is physically absent for much of the novel, has a presence which is vividly felt and whose shadow looms large over the text. Adrian’s frank and forthright discussion of sexuality is reminiscent of literary pioneer Judy Blume, exploring issues of sexual history, orientation, pleasure, and consent. While I’ll refrain from discussing the specific events of the novel in detail for fear of spoiling the wonder of discovery as the author takes the story in new and unexpected directions, Adrian’s grasp of the teenage and high school experience is achingly poignant and unflinchingly honest. The author forces readers to confront the often ugly and unkind truths of being an adolescent, a stage of development when surviving – and thriving – means navigating a tenuous tightrope of rumour, reputation, image and innuendo. Throughout the the novel, Rebecca and the other members of the Essential Five are consumed with rehearsals for their next production, A Streetcar Named Desire. This play runs parallel to the central narrative as Adrian masterfully dovetails the two stories and uses the play as a lens through which to view the events of the novel, underling the cruel inevitability of the characters’ fate. The immense amount of time, care and effort it must have taken for the author to intertwine these two narratives so seamlessly is nothing short of amazing and underlines Adrian’s tremendous gift as a storyteller.

I had thought that falling in love was a decision. Like first you noticed a boy was cute and smart and had good taste in movies. He kissed you and it occurred to you to love him. If a certain amount of time passed and nothing went wrong, then congratulations: love.
But apparently that was not how it worked at all. Apparently love happened accidentally, and without warning, and at the exact moment you were supposed to get out of the car.

In case I haven’t already made this abundantly clear: You need this book in your life. Immediately. It seems as though there are no words adequate to describe the extent to which Like It Never Happened surprised, impressed and moved me or the level of injustice should it continue to go largely overlooked amongst its contemporary peers. The universality and vast scope of this tale, simultaneously reflecting on nothing in particular and everything all at once, creates an experience that must be read to be believed – and appreciated. Smart, brash, and unflinchingly honest, Emily Adrian’s 2015 debut will challenge you to become a better reader, a better friend, and a better person. I believe in this book, I believe in this author, and I can’t wait to see what Adrian has in store for readers next.