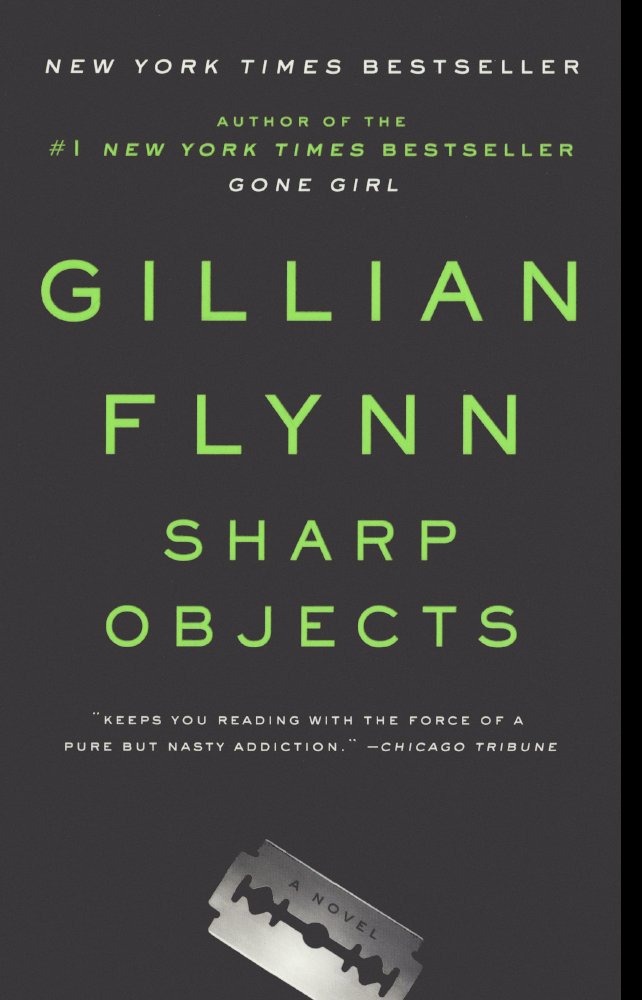 Words are like a road map to reporter Camille Preaker’s troubled past. Fresh from a brief stay at a psych hospital, Camille’s first assignment from the second-rate daily paper where she works brings her reluctantly back to her hometown to cover the murders of two preteen girls.

Since she left town eight years ago, Camille has hardly spoken to her neurotic, hypochondriac mother or to the half-sister she barely knows: a beautiful thirteen-year-old with an eerie grip on the town. Now, installed again in her family’s Victorian mansion, Camille is haunted by the childhood tragedy she has spent her whole life trying to cut from her memory.

As Camille works to uncover the truth about these violent crimes, she finds herself identifying with the young victims — a bit too strongly. Clues keep leading to dead ends, forcing Camille to unravel the psychological puzzle of her own past to get at the story. Dogged by her own demons, Camille will have to confront what happened to her years before if she wants to survive this homecoming.

“I felt no particular allegiance to the town. This was the place my sister died, the place I started cutting myself. A town so suffocating and small, you tripped over people you hated every day. People who knew things about you. It’s the kind of place that leaves a mark.”

Employed at the fourth-largest newspaper in Chicago, the Daily Post, Camille Preaker is sent to her hometown of Wind Gap, Missouri by her editor, Frank Curry, in order to cover a story about a possible serial murder case. Convinced that one great story will elevate the paper to a more respectable stature, Camille is tasked by Curry with reporting on the murders of Ann Nash and Natalie Keene, two young girls who pasts are littered with as much horror and violence as her own. Found strangled to death with each of their teeth removed, the deaths of Ann and Natalie have plunged the small town of Wind Gap into chaos as the locals begin to turn on one another and no-one seems immune from suspicion. Working alongside local police and a Kansas City detective, Richard Willis, Camille becomes involved in the desperate search to ascertain the identity of the perpetrator before they strike again. Having only recently been released from a mental institution, Camille struggles to retain a tenuous grip on her sanity while becoming increasingly embroiled in the insidious, poisonous politics of the small town that threatened to destroy her once before.

“Natalie was buried in her family plot, next to a gravestone that already bore her parents’ names. I know the wisdom, that no parents should see their child die, that such an event if like nature spun backward. But it’s the only way to truly keep your child. Kids grow up, they forge more potent allegiances. They find a spouse or a lover. They will not be buried with you. The Keenes, however, will remain the purest form of family. Underground.”

Having heard much made of Gillian Flynn’s most recent 2012 release, Gone Girl, particularly in the wake of the news that it’s to be adapted into a feature film, I was eager to see what all the fuss was about. More than a little intimidated by what I had heard of Gone Girl, however, I thought it might be best to begin with one of Flynn’s lesser-known novels in order to get a feel for her style. Despite having had my expectations sufficiently raised by the overwhelming praise Gillian Flynn was receiving for her work, even I couldn’t have predicted my absolute adoration for Sharp Objects. I’m once again faced with the impossible task of trying to covey just how much a novel moved me, when no words or exclamations seem sufficient. Sharp Objects rocked me to my very core and is easily one of the best novels I’ve read in recent memory. This novel burrows beneath your skin, making you simultaneously sickened and enthralled as you’re pulled deeper and deeper into Camille’s psychosis and the truth behind the murders that have terrorized a small town.

“Sometimes I think illness sits inside every woman, waiting for the right moment to bloom.”

A woman whose very skin is a roadmap of her pain and suffering, once a cutter, Camille spent much of her adolescence carving an endless series of words into her skin (Voracious, Wretched, Queasy, Tangle, Dosage, Blossom). There is not an inch of Camille’s flesh that remains unmarked apart from a small area of space at the base of her spine. Prized for her beautiful visage, few know the horrifying truth or are aware of what lies beneath the long sleeves and skirts that Camille uses to disguise her self-destructive tendencies. Poised on the precipice of relapse, Camille nows spends hours endlessly tracing these scars with her fingers, desperately battling the urge to once again turn to sharp objects as an outlet for her pain. Unfortunately, it soon becomes clear that Camille has simply replaced one coping mechanism for another. Now relying on a constant state of inebriation in order to get through the day, alcohol anesthetizes her against the harsh realities of the world. One can’t help but feel that Camille’s life was destined for dysfunction and unhappiness from the outset. Reared by a distant mother who withholds affection and ministers to ailments, both real and imagined, with a zeal and ferocity that bordered on manic, Camille is trapped in a stage of arrested development, simultaneously desiring and scorning her mother’s attention in equal measure. This often causes her to act far younger than her thirty plus years of age. Also mourning the loss of her beloved sister, Marian, and forced to form a relationship with her half-sister, Amma, who she has never known, there is little doubt as to why Camille acts as she does.

“They always call depression the blues, but I would have been happy to waken to a periwinkle outlook. Depression to me is urine yellow. Washed out, exhausted miles of weak piss.”

Seemingly unable to comprehend the acts of cruelty committed against her as a young adult, it’s extremely difficult not to care deeply about Camille, despite her many flaws. An unreliable narrator, Camille draws you into the depths of her depression, paranoia and confusion until you feel as though you’re drowning, desperately searching for some semblance of truth and assurance in order to keep yourself afloat. Told from a first person perspective, being privy to Camille’s innermost thoughts was an asset, as it allows the reader to connect more deeply with a character who, had this story been told in third person narration, might have otherwise proved alienating or unlikeable to the audience. Her touching relationship with her editor and surrogate-father figure, Frank Curry, was one of the highlights of the novel, and added some much-needed levity and kindness to an otherwise bleak and depressing story.

“I drank more vodka. There was nothing I wanted to do more than be unconscious again, wrapped in black, gone away. I was raw. I felt swollen with potential tears, like a water balloon filled to burst. Begging for a pin prick. Wind Gap was unhealthy for me. This home was unhealthy for me.”

Much like the words that Camille engraves into her flesh, I desperately wanted to memorialize Flynn’s brilliant prose in some way. Every sentence was delectable, and I was utterly captivated as I attempted to absorb every single word. It’s quite clear that the author has a passionate appreciation for the written word and I continually marveled at Flynn’s unique ability to make even the most ugly of subject matter, like self mutilation and serial murder, into something poetic and hauntingly beautiful. It felt almost perverse to cherish the words that were used to describe such horrific atrocities and unimaginable pain and suffering. If I could manage it, this review would be composed entirely of quotes, a testament to the countless pages I marked along the way, desperate to re-visit and re-read at my leisure. I constantly found myself at war with two opposite urges: To savor every word and read as slowly as possible in order to make the book last, and to continue devouring the novel at the speed of light because I was unable to tear myself away from it for a single minute.

“It’s impossible to compete with the dead. I wished I could stop trying.”

The mystery as to who murdered Ann Nash and Natalie Keene was well rendered and interesting to pursue. While the pool of suspects was not particularly vast, the real mystery lay in attempting to discern what the motivation behind the crime was. Ann and Natalie’s rather macabre history added an interesting dimension to the story and I appreciated that the crimes were not sexually motivated, as I was initially expecting. While I was able to discern who the culprit was before the final reveal, this in no way detracted from my overall enjoyment of the story. I certainly vacillated about this decision throughout, and Flynn successfully creates reasonable doubt for a number of characters. Having grown up reading a plethora of novels in the mystery, thriller, and horror genres, it’s fair to say that I don’t scare easily. It takes quite a bit to make me uncomfortable or frightened while reading, but Sharp Objects certainly accomplished both. Forget zombies or vampires! I’ve said it before and I’ll say it again: There is nothing quite so horrifying as the darkness and perversion of the human spirit, and the depths of depravity some are willing to stoop in order to satisfy their baser instincts. This novel chilled me to the bone. Not since reading Bret Easton Ellis’ American Psycho have I been made this uneasy and anxious while reading. Gillian Flynn certainly doesn’t shy away from the violence and perversion hidden beneath the quaint, small town exterior of Wind Gap.

“A child weaned on poison considers harm a comfort.”

A story about the darkness of the human condition and the infinitesimal, infinite moments in our lives that leave us irreparably changed, Gillian Flynn’s Sharp Objects is certainly not the right novel for everyone. Raw and violent, dark and disquieting, this is not a story for the faint of heart. A psychological thriller with a bone-chilling mystery that will have you riveted until the very last page, Flynn’s work will continue to haunt you for days, weeks, months, and even years afterward. This is one novel I can safely say I will never forget, nor would I ever wish to. Sharp Objects is a tour de force, a literary masterpiece that reminds us what truly great literature is able to accomplish and evoke in its readers.