Review: The Art Of Lainey by Paula Stokes 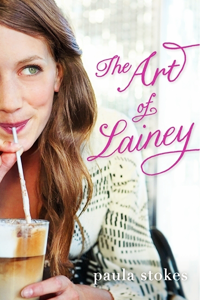 Soccer star Lainey Mitchell is gearing up to spend an epic summer with her amazing boyfriend, Jason, when he suddenly breaks up with her — no reasons, no warning, and in public no less! Lainey is more than crushed, but with help from her friend Bianca, she resolves to do whatever it takes to get Jason back.

And that’s when the girls stumble across a copy of The Art of War. With just one glance, they’re sure they can use the book to lure Jason back into Lainey’s arms. So Lainey channels her inner warlord, recruiting spies to gather intel and persuading her coworker Micah to pose as her new boyfriend to make Jason jealous. After a few “dates”, it looks like her plan is going to work! But now her relationship with Micah is starting to feel like more than just a game.

“You can’t just show up at my job and break up with me. Who does that?”
What I mean is, things like this are not supposed to happen when everything else is perfect. In April, I got picked out of over a hundred girls to star in a commercial for Hazelton Forest University. In May, I scored a winning goal at the state soccer championships. And the summer was shaping up to be truly epic.
What the hell happened?

All’s fair in love and war. At least, that’s what Lainey Mitchell decides after her boyfriend of two and a half years, Jason, dumps her in public and humiliating fashion in the middle of her family’s coffee shop. Determined to get to the bottom of their unexpected and unexplained break-up and win Jason back, Lainey enlists the help of her best friend, Bianca, and the ancient wisdom of Chinese military strategist Sun Tzu. After all, love is a battlefield. Using The Art Of War as her guide and her lovelorn co-worker, Micah, as her partner in crime, Lainey embarks on a summer-long quest to win back her ex. As tactics are discussed, strategies are employed and loyalties (and feelings) are tested, however, Lainey will be forced to question what exactly it is she’s fighting for and whether what she wants is truly what she needs.

I’m Lainey Mitchell, varsity soccer star. I have my own freaking commercial. I’m not a loser. I rock – I know it. And underneath whatever is going on with Jason, I’m sure he knows it too. All I have to do is figure out a way to make him remember.

Paula Stokes is an author whose views I respect, whose blog I enjoy, and whose novels have long held a place on my toppling to-be-read list. It wasn’t until I was given the opportunity to read an early draft of Paula’s forthcoming 2016 novel, Girl Against The Universe, however, that I fell in love with the author’s prose and made quick work of investigating her backlist of previously published titles. While I had some initial misgivings regarding The Art Of Lainey – the cover, in particular, leaves much to be desired – these feelings were quickly cast aside as I couldn’t help but devour Stokes’ charming 2014 contemporary debut in a single sitting and was quick to recommend it to family, friends, and strangers alike.

My reading generally consists of soccer and gossip magazines, so struggling through The Art Of War is going to feel like self-mandated summer school. But hey, at least it’s short. And if it works for armies and athletes, maybe it can work for me. I’m a girl who believes in fighting for what she wants.

Since The Art Of Lainey‘s publication in May 2014, opinions regarding Lainey Mitchell have been as vigorous as they have been varied. Some readers have categorized Lainey as vain and shallow, a label not altogether inaccurate, particularly at the outset of the novel. After all, Lainey is concerned with her tan (or lack thereof), her hair, and the unfortunate smattering of freckles on her forehead in the shape of New Jersey. But to characterize her as such would be to only tell half the story. Lainey is also confident, pretty, popular, and athletic and, to the outsider observer, would appear to have it all. In what becomes a underlying theme in the novel, however, there is far more to Lainey’s character than initially meets the eye. In the wake of her break-up with Jason, Lainey is forced to confront a host of difficult (and often unpleasant) truths about herself, most notable of which is how intrinsically her sense of self has become linked with her relationship. Without this, Lainey is lost and uncertain. Who is she, if not Jason’s girlfriend? Lainey’s subsequent quest for self-discovery reminds us that it is never too late to reinvent ourselves and warns against the dangers of allowing another person’s perception to define us. Her hidden insecurities – about her looks, about her relationships, and about her future – are sure to resonate with any reader who has ever struggled to find their way. It is this compelling internal conflict and Stoke’s subtle yet masterful grasp of Lainey’s development over the course of the novel that make The Art Of Lainey a truly spectacular accomplishment.

…Micah’s eyes are still closed, his body loose. He has no idea my eyes are skimming their way down the lines of his body. His cheekbones. His beard stubble. The ridge of muscle connecting his jaw to the centre of his chest. The faintest trace of sweat glistens where his neck meets his right shoulder. I want to touch my lips to it.

The Art Of Lainey has a great deal to recommend it in addition to its effervescent, eponymous heroine. There is, for example, Lainey’s wonderful support system, composed primarily of her smart, ambitious and independent best friend, Bianca, and her academically-minded mother, an involved parent who takes an active interest in her daughter’s life and educates Lainey about safe sex practices – both of which were also welcome surprises! There is also the issue of world-building, a consideration not typically discussed in relation to novels with a realistic, contemporary setting, but worth mentioning in this particular case. Stokes’ sense of setting is superb, creating vibrant, three-dimensional environments, and nowhere is this more apparent than in the author’s description of Denali, the quaint, eccentric coffee shop owned by Lainey’s parents where much of the action in the novel takes place. This café was presumably based largely on ‘Wiliker’s Restaurant’, an establishment which the author mentions in the book’s acknowledgements, and this personal connection is evident in each detail and anecdote that Stokes relates. The author’s use of evocative description extends to every single location in the novel, from settings as benign as a high school pool party and the local dance club to Mizz Creant, a bizarre, whimsical restaurant that acts as the setting for Lainey and Micah’s first “date”, complete with macabre dishes and a dungeon down below. While the novel doesn’t reinvent the wheel in regard to plot, it doesn’t need to. The Art Of Lainey follows a predictable romantic comedy formula that will be familiar to (and beloved by) many. From enemies to lovers to a fake relationship Stokes employs the tropes synonymous with this genre to best effect, creating a compulsively readable comedy of errors complete with a heart-warming happily ever after.

I’m worried about everything else – about messing things up, about getting hurt, about hurting him. But I have to try. The way I feel in this moment, that’s worth fighting for. All those lines in The Art Of War about choosing one’s battles wisely suddenly make sense to me. Not everything is worthy of great risk and possible sacrifice.
Micah is.

Sweet, funny, and endlessly charming, The Art Of Lainey reminds us that we need not always read the latest releases to have an immense amount of fun. The author’s impecable attention to detail – to her characters, to her settings, and to the genre which she is so lovingly honouring – is a tribute to both the author and the work in question. Lainey’s antics, and the exuberance with which Stokes relates them, made this novel a vibrant, vivacious, irresistible delight that this Clueless-quoting, When Harry Met Sally-watching, Nora Ephron-adoring romantic comedy addict couldn’t help but fall hopelessly, unapologetically in love with. Then again, I’m just a girl, standing in front of her readers, asking them to read this book.

● Kelly @ Effortlessly Reading wrote “I definitely recommend you guys check out The Art of Lainey, especially if you’re looking for a fun, adorable contemporary.” (Read the rest of the review Here!)

● Gillian @ Writer Of Wrongs wrote “This book made me happy. Deeply, sincerely happy. This is just the sort of adorable-with-some-substance contemporary I live for.” (Read the rest of the review Here!)