Review: The Distance From Me To You by Marina Gessner 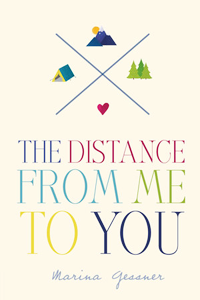 McKenna Berney is a lucky girl. She has a loving family and has been accepted to college for the fall. But McKenna has a different goal in mind: much to the chagrin of her parents, she defers her college acceptance to hike the Appalachian Trail from Maine to Georgia with her best friend. And when her friend backs out, McKenna is determined to go through with the dangerous trip on her own. While on the Trail, she meets Sam. Having skipped out on an abusive dad and quit school, Sam has found a brief respite on the Trail, where everyone’s a drifter, at least temporarily.

Despite lives headed in opposite directions, McKenna and Sam fall in love on an emotionally charged journey of dizzying highs and devastating lows. When their punch-drunk love leads them off the trail, McKenna has to persevere in a way she never thought possible to beat the odds or risk both their lives.

Of course Courtney didn’t think she should do it alone – nobody would. But the images were already forming in McKenna’s mind: all those miles of fabulous solitude, her body getting stronger, her mind growing wider. In preparation for this hike she’d read a mountain of books – wilderness guides, memoirs, novels. One of her favourites was by a woman who’d hiked the Pacific Crest Trail alone without even a debit card, and before iPhones and GPS. If she could do it, why not McKenna?
“Your parents will never let you,” Courtney pointed out.
McKenna threw down her chopsticks. “That’s why we’re not going to tell them,” she said.

McKenna Berney and her best friend, Courtney, had it all figured out: They would defer their college acceptances for a year and dedicate the next six months of their lives to a once-in-a-lifetime exploration of the Appalachian Trail, just as her father and his best friend had once explored the Pacific Northwest Trail. But when Courtney bails at the last minute in order to nurse her failing relationship with her faithless, on-again, off-again boyfriend, it seems as though McKenna’s long-held dream will remain just that. Unwilling to sacrifice months of meticulous planning and preparation, McKenna decides to forge ahead, deceiving her parents and striking out on the trail alone. What begins as a solo expedition quickly transforms into something else entirely, however, as McKenna spends increasing amounts of time with the mysterious and enigmatic Sam, a boy who seems to have made the trail his home. As the two continue to grow closer, Sam and McKenna will test the boundaries of their relationship and their abilities as one fateful decision forces McKenna to confront the one potentially-fatal possibility she never planned for.

As she put one foot onto the trail, excitement made her light on her feet despite the thick straps cutting into her shoulders. She had planned, she had trained. She had prepared as much as she possibly could, both mentally and physically.
She was ready.

When I was a little girl, there were few things I enjoyed more than survival stories. From Gary Paulsen’s Hatchet to Stephen King’s The Girl Who Loved Tom Gordon, I was endlessly fascinated with novels that explored one character’s struggle to survive under unusual circumstances in the most natural of surroundings. While I’m under no illusions as to the extent of my own abilities in a similar situation – my idea of ‘roughing it’ is more akin to being deprived of my cell phone and DVR for a week – it’s captivating to examine how characters react when faced with these often-harrowing scenarios. Marina Gessner’s The Distance From Me To You is no exception. Thoroughly researched and compulsively readable with an empowered – and empowering – heroine, The Distance From Me To You explores one girl’s journey of self-discovery and the complexity of love in a story that will inspire readers to question what it is they plan to do with this one wild and precious life.

…(She) stood with the old-fashioned phone pressed to her ear, listening to news from a million miles away. How weird that every step was taking her closer to her hometown when inside it felt like she was walking father and father away, to a place deeper inside herself.

The Distance From Me To You is very much a plot-driven novel, relying far more heavily on Gessner’s evocative descriptions of the trail and McKenna’s movements than on meaningful character development. That said, both McKenna and Sam are likeable, admirable characters who readers will no doubt find interesting, if perhaps a little superficial. Smart, determined, resourceful and resilient McKenna is the more compelling of the two, reminding us that a female character need not take up arms in order to be considered ‘strong’. One element of the novel that Gessner insightfully touches upon is the dichotomy that exists between McKenna and Sam’s respective situations and their reasons for being on the trail. McKenna’s college attendance, a virtual certainty, as well as her ability to defer this for a year in order to fulfill a lifelong dream, both speak to the immense amount of privilege she possesses. McKenna also has an element of financial security, having access to and the use of her parent’s credit card while on her expedition in order to procure food, the occasional hotel room, and additional supplies. In direct contrast to this, Sam has taken to the trail out of necessity, not in a quest for self discovery or enrichment, but rather to escape unrelenting abuse at the hands of his father. His future is an indecipherable blur, an endless series of unending steps, odd jobs, faceless girls, and open wounds. While it’s true that the focus of the novel eventually shifts to include McKenna’s burgeoning romantic relationship with Sam, I never felt as though this derailed the narrative. The Distance From Me To You remains firmly rooted in McKenna’s journey, both physically and emotionally. This is further emphasized by a number of authorial choices, most notable of which is the novel’s conclusion, which is immensely satisfying and appropriate given the narrative’s overall trajectory.

Inside her chest, something blossomed. The way some moments stay with you forever: McKenna knew that for the rest of her life, rain on a tent flap would be the sound of falling in love. The new breadth of feeling rose like adrenaline. The person she became inside that shadow-filled tent was somebody that nobody else on earth – nobody but Sam – had ever seen.

While I was unable to forge as significant an emotional connection with McKenna and Sam as I would have liked, the author’s writing is not to be faulted. Expressive, vivid, and impeccably researched, Gessner writes with a clarity of vision and specificity that brings the Appalachian Trail to life, transforming it into another living, breathing entity in the novel. This, combined with the novelty of the concept itself, makes The Distance From Me To You a compulsively readable narrative that readers will find difficult to put down after turning the first page. Another aspect of the novel that’s exceptionally well-rendered is Gessner’s examination of gender politics. Many of the people McKenna encounters, including her parents and fellow hikers, question her place on the trail not because of a lack of faith in her preparedness or abilities, but solely because she’s a single woman travelling alone. This isn’t to imply that Gessner is blind to the other dangers inherent in this sort of undertaking – Fatigue, dehydration, hypothermia, giardia, isolation, and the threat of natural predators like bears and coyotes are all ever-present realities in the novel as well. Rather, the author also provides an insightful exploration and searing condemnation of what poses perhaps the largest threat of all: The reality of living as a woman in a society in which misogyny and rape culture are inherent. No matter how well-equipped or well-prepared McKenna is for her expedition, her safety is immediately at risk as she is operating within a society which is fundamentally broken, in which men are not taught not to rape, but women are instead taught to protect against it and have the onus placed largely on them.

She walked. Feeling so much stronger than that day not so long ago when she had tried to scale Katahdin. And at the same time knowing that she was drawing from the same well of strength she’d had then, deep inside her, and that the well would flourish always, as long as she was smart enough to listen to the inner voice of reason that came with it.
She was lucky.

I went to the woods because I wished to live deliberately, to front only the essential facts of life, and see if I could not learn what it had to teach, and not, when I came to die, discover that I had not lived. These words, so eloquently uttered by Henry David Thoreau in Walden, perfectly encapsulate the purpose and feeling of Marina Gessner’s 2015 debut. Although most readers will not have the time, ability, or resources to follow in McKenna’s footsteps and take to the trail tomorrow, The Distance From Me To You is a story of discovery, enrichment and love that reminds readers of the importance of remaining purposeful and present in all we do. To find that which we are most passionate about, and pursue it relentlessly. To not allow the constant pressure to remain connected and engaged with the world around us prevent us from looking inward and nurturing the most important relationship we will ever cultivate – The one with ourselves.

● Alexa @ Alexa Talks Books wrote “I highly recommend this to readers who enjoy YA contemporary romance, books about adventure, hiking, nature and camping.” (Read the rest of the review Here!)

● Shannon @ It Stars At Midnight wrote “Overall, this was definitely more good than bad…while there were parts that I found a bit lacking, I enjoyed the overall story a lot.” (Read the rest of the review Here!)

● Laura @ Librarian Laura wrote “I really appreciated the way the author didn’t focus too much on the romantic relationship between Sam and McKenna, but instead on their individual character traits, in order to show their bravery and resilience.” (Read the rest of the review Here!)