Review: Under A Painted Sky by Stacey Lee 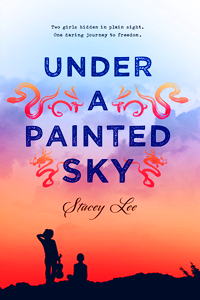 Missouri, 1849: Samantha dreams of moving back to New York to be a professional musician — Not an easy thing if you’re a girl, and harder still if you’re Chinese. But a tragic accident dashes any hopes of fulfilling her dream, and instead, leaves her fearing for her life. With the help of a runaway slave named Annamae, Samantha flees town for the unknown frontier. But life on the Oregon Trail is unsafe for two girls, so they disguise themselves as Sammy and Andy, two boys headed for the California gold rush. Sammy and Andy forge a powerful bond as they each search for a link to their past, and struggle to avoid any unwanted attention. But when they cross paths with a band of cowboys, the light-hearted troupe turn out to be unexpected allies. With the law closing in on them and new setbacks coming each day, the girls quickly learn that there are not many places to hide on the open trail.

Alongside an escaped slave from the brothel, Samantha and Annamae take to the relative safety and anonymity of the Oregon Trail, travelling not as themselves, but in disguise as “Sam” and “Andy”,

This beautifully written debut is an exciting adventure and heart-wrenching survival tale. But above all else, it’s a story about perseverance and trust that will restore your faith in the power of friendship.

They say death aims only once and never missed, but I doubt Ty Yorkshire thought it would strike with a scrubbing brush.

When an attempt at self defence turns fatal, two girls must take to the hard and unforgiving terrain of the Oregon Trail in an effort to preserve their newfound friendship, their freedom and, ultimately, their very lives. All fifteen-year-old Samantha ever wanted was to return to the comfortable familiarity of New York City where she can pursue her dream of becoming a professional violinist and open a music conservatory with her father. Instead, the accomplished musician finds herself helping to operate The Whistle, a small dry goods story, in the town of Saint Joseph, Missouri. When The Whistle is set ablaze with her beloved father still inside, however, Samantha sees more than her dreams go up in smoke. Lost, alone, and heartbroken, she places her trust in Ty Yorkshire, their landlord. Unfortunately, Mr. Yorkshire’s intentions are anything but philanthropic. Whilst defending herself against his assault, Samantha unintentionally takes his life. With the aid of escaped slave, Annamae, the two disguise themselves as boys and escape using the anonymity of the Oregon Trail to avoid prosecution and almost certain death. Samantha and Annamae eventually join forces with a group of three cowboys and together the group confront issues of faith, race, sexuality and identity on a treacherous, life-threatening expedition undertaken by so many of the west’s first settlers.

Slowly, we part the willow curtain. I follow Annamae back onto the deserted trail, feeling naked despite all my layers. The morning rays begin to paint the landscape with pastels. Yesterday morning, the sight would have filled me with wonder. Now, my gut chokes with sand and all I see before me is a road with no end.

Hitch up those wagons, holster those revolvers and gather up those oxen, because we’re about to embark on a journey across the Oregon Trail! Thanks in large part to the cultural zeitgeist and classroom-staple that was Brøderbund’s classic, educational video game of the same name, there are few who grew up in the 1980’s and early 1990’s who are unfamiliar with the Oregon Trail in some capacity. Yet while jokes about death by dysentery continue to abound in the popular culture, there has been little in the way of any form of literary examination or attention paid to what is arguably one of the most colourful and harrowing periods in America’s history. This is an omission made all the more glaring because of its prolificacy in other forms of media such as film and television. Thankfully, with the forthcoming release of both Under A Painted Sky and Erin Bowman’s Vengeance Road, this is an oversight that promises to be soon corrected. In her aforementioned 2015 publication, debut author Stacey Lee examines this period in imaginative and exciting new ways. Expertly hewn with lush, evocative detail, pulse-pounding action and two diverse, nuanced protagonists, Under A Painted Sky reads not like the first book from an fledgling, inexperienced author, but rather a new volume from a seasoned, phenomenally talented professional. On the strength of this release alone, I would not hesitate to declare Stacey Lee one of the strongest new voices in the young adult market.

Father always said, If you cannot be brave, then imagine you are someone else who is. So I imagine myself as him, my optimistic father, whose step never wavered, whose face never hid in shadows. Lifitng my chin, I march after Andy as if my cares were few and my outlook, golden.

The importance of seeing characters who reflect one’s experience and background cannot be overstated. While great strides have been made in recent years to promote diversity in young adult literature, there is significant progress yet to be made. Books like Under a Painted Sky remind us of the wealth of knowledge to be gained when reading about experiences that may be vastly different from our own. Samantha and Annamae’s Chinese-American and African-American heritage, respectively, do not define them but rather allow for an often overlooked glimpse into this period that has not been filtered through a white viewpoint. Additionally, their value as characters is not limited to their merits as individuals but rather extends to their relationship as friends as well. While Samantha does eventually develop romantic feelings for one of the cowboys with whom they’re travelling, Lee’s primary focus on Samantha and Annamae’s relationship never waivers. What begins as a connection born of convenience and circumstance gradually blossoms into something much more significant as the two forge a bond as heartwarming as it is unforgettable. In a market where the positive portrayal of female friendship remains the exception rather than the rule, the author’s emphasis on this relationship was welcome and appreciated. Lee sets an excellent example for young female readers, allowing them to see other women not merely as antagonists or romantic rivals, but as potential sources of comfort, understanding and support. Despite vast differences in race, faith, upbringing, background and experience, Samantha and Annamae become more than mere friends; they’re family. This dissimilarity in knowledge and perspective is used not merely to emphasize their differences but to demonstrate how their contrasting personalities complement one another. Annamae’s practical approach is supplemented by Samantha’s cultured and formally educated upbringing. While the two appear to have little in common, their combined diverse experiences and viewpoints allow them to draw on their individual strengths to create collective success. In the process, the characters, as well as the reader, are made all the better for it.

He turns to me, but instead of looking away like he usually does, he lingers. Our eyes lock, mine still wet, his tortured, and I glimpse his soul.
They say time freezes, but I’ve never experienced it until now. I stay like that, lost in his eyes for that eternal moment, and then the dawn breaks, and we are Sammy and West again, boys on the trail.

In Under the Painted Sky, the author guides readers through previously unexplored terrain, recreating the harsh, unforgiving landscape and conditions of the Oregon Trail with evocative language and a sense of imminent danger and consequence. Every blade of grass, every call of the coyote and every whistle of the wind is captured in vibrant, visceral detail as Lee deftly demonstrates a writer’s transformative ability to transport a reader through time to a place or period previously unknown to them. No feature is too small or too inconsequential to escape the author’s notice, even going so far as to address how a young girl dealt with her monthly cycle in the mid-nineteenth century. Spanning more than 2,000 miles, the journey undertaken by pioneers, argonauts and cowboys to begin life anew in the west was treacherous, back-breaking, and life-threatening with little but the mere possibility of prosperity to entice them. This expedition, already complicated by the constant threat of cholera, criminals and wild animals, is made all the more arduous for Samantha and Annamae, who must also contend with the constant threat of discovery. As complicated as leading this dual identity is, however, Samantha and Annamae’s roles as ‘Sam’ and ‘Andy’ allow them to experience a sense of freedom and develop a new relationship with their bodies. While masquerading as boys, their every gesture, every movement and every reaction is a careful calculation determined by their adopted disguise, leading to some rather unexpected, and interesting, results.

“One!”
Why should fate always have the upper hand? Passing out luck, like mooncakes in autumn, then snatching them right out of your mouth. Well, Fate, I reject you, from your gleaming jaw to your pale underbelly.
“Two!”
From now on, I will make my own luck.
“Three”
And this time, I will not roll snake eyes.

A novel that would make the perfect addition to any classroom or household, Under a Painted Sky promises to revitalize and redefine the understanding of the Oregon Trail and westward expansion for the next generation. In it, debut author Stacey Lee has created a thoughtful and compelling novel that offers a diverse and innovative look into a formative period of America’s history. Samantha and Annamae are two characters that readers have long been searching for, allowing for the inclusion of exciting and original voices to shed new light on a familiar story. Under a Painted Sky would make the perfect choice for even the most reluctant historical fiction reader and should not be overlooked under any circumstances.

● Amy @ The Show Me Librarian wrote “It’s diverse without the diversity ever feeling forced or tokenistic. It’s feminist without ever smacking readers upside the head with it.” (Read the rest of the review Here!)

● Rachel @ A Perfection Called Books wrote “Under A Painted Sky was wholly unique and different from anything I’ve ever read, and I fell in love with each and every aspect.” (Read the rest of the review Here!)

● Sarah @ Clear Eyes, Full Shelves wrote “I cannot wait to see what Stacey Lee does next. She’s a phenomenal storytelling who crafts vivid characters I was sad to leave when I turn the last page of Under A Painted Sky.“ (Read the rest of the review Here!)