Book Review: How To Love by Katie Cotugno 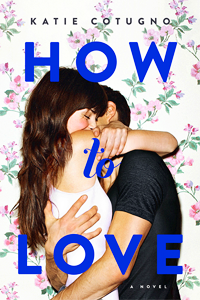 Before: Reena Montero has loved Sawyer LeGrande for as long as she can remember. But he’s never noticed that Reena even exists…until one day, impossibly, he does. Reena and Sawyer fall in messy, complicated love. Then Sawyer disappears without a word, leaving a devastated — and pregnant — Reena behind.

After: Almost three years have passed, and there’s a new love in Reena’s life: her daughter. Reena’s gotten used to life without Sawyer, but just as suddenly as he disappeared, he turns up again. Reena wants nothing to do with him, though she’d be lying if she said his being back wasn’t stirring something in her. After everything that’s happened, can Reena really let herself love Sawyer LeGrande again?

Serena (Reena) Montero has always been ‘good’: The good daughter, the good friend, the good student and the good Catholic. With dreams of escaping her small Florida town, graduating high school one year early and attending Northwestern university, everything is going according to plan until a passionate, turbulent, intoxicating (and increasingly toxic) romance with her childhood crush, Sawyer LeGrande, ends with Reena becoming pregnant at the age of sixteen shortly before Sawyer leaves town, unaware of what has happened. When Sawyer returns, unexpected and unannounced two years later only to discover he is now a father, Reena and Sawyer must confront the unresolved pain of their past if they are ever to create hope for their future.

How To Love is unvarnished, unapologetic, uncompromising, courageous storytelling at its finest. Cotugno has no qualms about exploring and exposing the deeply flawed nature of her characters. In doing so the authors provides an intimate, intricate examination of Reena and Sawyer, both as individuals and also as a couple. A self-professed “Ice Queen” who has difficulty allowing herself to be vulnerable, Reena’s fear of intimacy is furthered worsened by Sawyer’s abandonment at a moment in her life when she needed him most of all. Despite this, however, Reena is nevertheless an intelligent, adaptable, ambitious, hard-working woman who selflessly puts her own dreams on hold to care for her daughter to the best of her ability. When Sawyer returns to town a changed and more mature man than the lost, unsure boy who left Reena two years earlier and expresses a desire to rekindle their relationship and help co-parent their daughter, however, Reena will once again see the scope and direction of her life change in a significant manner.

Lingering resentment, unspoken secrets, guilt, disillusionment and disapproval on the part of both of their families create a great deal of tension between Reena and Sawyer, but this conflict never feels gratuitous or inauthentic and makes the couple’s hard-fought and well-earned conclusion all the more satisfying. Cotugno’s exploration of Reena’s relationship with other, secondary characters is equally compelling. Each contribute to the story in a meaningful way and provide Reena with a source of unconditional love, support and perspective when she needs it most of all. Whether the author is examining Reena’s relationship with Soledad, her step-mother (a relationship made all the more special because of the relative rarity of positive portrayals of relationships of this nature) or Reena’s relationship with Shelby, her quirky best friend, How To Love emphasizes the beauty and power of found families. As the novel’s synopsis suggests, How To Love is told from Reena’s perspective during two alternating, interconnected periods in her life – “Before” and “After” – which documents both Reena and Sawyer’s history as a young couple in love and their subsequent reconciliation two years later. The manner in which the novel is written creates an irresistible momentum as the audience is compelled to keep reading to better connect the dots between past and present, with each tantalizing glimpse into their shared history leaving the reader ravenous for more.

How To Love is a tumultuous, poignant but ultimately hopeful, heartwarming story about forgiveness, redemption and second chances that reminds readers what it means to love and be loved in return.