Short & Sweet Reviews: The Devil You Know by Trish Doller 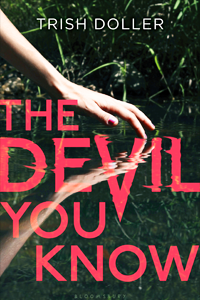 Cadie Wells has spent most of her life doing the right thing: going to school, working, and taking care of her family. But it’s the summer after her high school graduation and she’s ready for something big to happen.

So when she meets two handsome cousins at a campfire party, she finally has a chance for fun. There’s the mysterious, seductive Noah. Then there’s intelligent, good-natured Matt. When they invite her and a friend to join them on a road trip, it’s just the escape Cadie has been craving. But what starts out as a carefree journey quickly turns deadly when she discovers that one of the boys is not who he claims to be at all.

From giving up her position on her high school soccer team to breaking up with her longterm boyfriend, Arcadia (Cadie) Wells’ life has been one of duty and sacrifice as Cadie made the difficult choices necessary to better help care for her grieving father and younger brother and help support her family’s fledgling business in the wake of her mother’s death. Reduced to merely dreaming of the adventures she longs to take, Cadie is therefore understandably excited when given the opportunity to take a spontaneous road trip across Florida with two charming, handsome cousins she meets at a local party. What begins as a idyllic adventure quickly transforms into an unpredictable nightmare, however, as Cadie learns that not everything – or everyone – are always as they appear.

The Devil You Know‘s greatest strength is arguably Cadie herself and, by extension, the protagonist’s (and the novel’s) unapologetic, empowering, feminist philosophy. Cadie is an assertive, outspoken heroine who is quick to point out – and actively challenge – the injustice and misogyny inherent in the world around her. Whether she’s confronting issues of toxic masculinity (“Poach? Seriously? Like, I’m an endangered white rhino instead of a person? Pretty sure I’m capable of choosing for myself, instead of waiting around for you guys to decide who gets me.”) or female sexuality (“Your goodness doesn’t lie between your thighs. And you don’t lose value by having sex.”), Doller’s use of Cadie as a conduit for candid, necessary discussions about consent, bodily autonomy and other issues relevant to those who identify as female is powerful and empowering.

While much of Cadie’s behaviour could be considered reckless and self-destructive, her choices are consistent and credible within the context of the narrative. A girl who has always put the needs of others before her own, Cadie’s desperate desire to escape a routine that had become stagnant and suffocating, and her subsequent willingness to take a risk to accomplish this, is understandable, particularly given her age. Cadie’s chemistry with the novel’s primary love interest is also well-rendered, being both intoxicating and irresistible. This is a particularly admirable accomplishment given that, based on the novel’s synopsis, the reader is instinctively inclined to distrust Matt and Noah and suspect them of being disingenuous. Doller perfectly captures the overwhelming, exhilarating desire of a new relationship and the terrifying uncertainty when said feelings and relationship grow more serious than either party initially imagined or intended.

The Devil You Know is a sexy, suspenseful, riveting thrill ride that seamlessly combines a series of seemingly disparate genres to thrilling – and chilling – effect as the novel hurtles towards its breathless, blood-soaked conclusion.