Cover Reveal: If Birds Fly Back by Carlie Sorosiak

Hi friends! Our collection of cover reveals concludes this week with today’s post as I have the immense pleasure of hosting the exclusive cover reveal for Carlie Sorosiak’s forthcoming 2017 young adult debut, If Birds Fly Back. Coming to a bookstore and library near you June 2017 from HarperTeen US and Macmillan UK, If Birds Fly Back follows the stories of Linny and Sebastian, two seemingly disparate individuals who are unexpectedly brought together by a shared interest in famous novelist and film star, Álvaro Herrera, and the absence of those who have left them behind. Sorosiak’s debut sounds like a heart-rending exploration of loneliness and belonging and its cover is equally exciting, with a delicate colour palette and powerful use of negative space. It was an honour to work with Carlie on today’s cover reveal and I can’t wait until I can experience this story firsthand. For now, please read on to learn more about this promising young adult debut, including an exclusive cover reveal, a personal note from the author about the story’s origins and an opportunity to win an advance reader copy of If Birds Fly Back!

We have a joke in my family about The Lady Of The Tree.

Never heard of it? That’s because it’s still sitting in my parents’ attic, right next to the clay pigeon whistle I sculpted in fourth grade. The Lady Of The Tree was my first foray into novel writing; between the ages of nine and thirteen, I amassed a ninety-thousand-word fantasy that, from what I can tell now, involved a lot of people riding around on horses for no particular reason. But I was obsessed with this book. I even video-recorded myself reading THE ENTIRE THING aloud to The Fellowship Of The Ring movie soundtrack. (You’re probably getting a pretty clear picture of the kind of kid I was.)

Fast-forward to university, where I’d drunk my grandparents’ Kool-Aid and was pursuing their dream of me becoming a doctor. I read fiction at night — secretly, guiltily — until I finally ditched my biology major on a study abroad trip to London. It was there that I had a simultaneously terrifying and exciting idea: I should write another novel, and maybe with a plot this time. I’ll skip over the in-between bit, because it was mostly me cradling my cat while crying softly over my manuscript, but eventually I discovered If Birds Fly Back. And I really do mean discovered: These characters were there all along. These characters represent every wish I had for myself.

Although I’ve never witnessed a cult writer seemingly rise from the dead, I have had a summer that completely transformed me. I’ve had my heart smashed to pieces by someone I thought I could trust. I’ve run away from home…and I’ve come back. So while Birds has significantly fewer horses than my thirteen-year-old ramblings, it does showcase my whole heart.

I hope you love the cover every bit as much as I do. 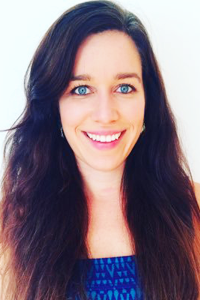 Carlie Sorosiak grew up in North Carolina and holds two master’s degrees: one in English from Oxford University, and another in Creative Writing and Publishing from City University London. Her life goals include traveling to all seven continents and fostering many polydactyl cats. She currently splits her time between the US and the UK, hoping to gain an accent like Madonna’s. 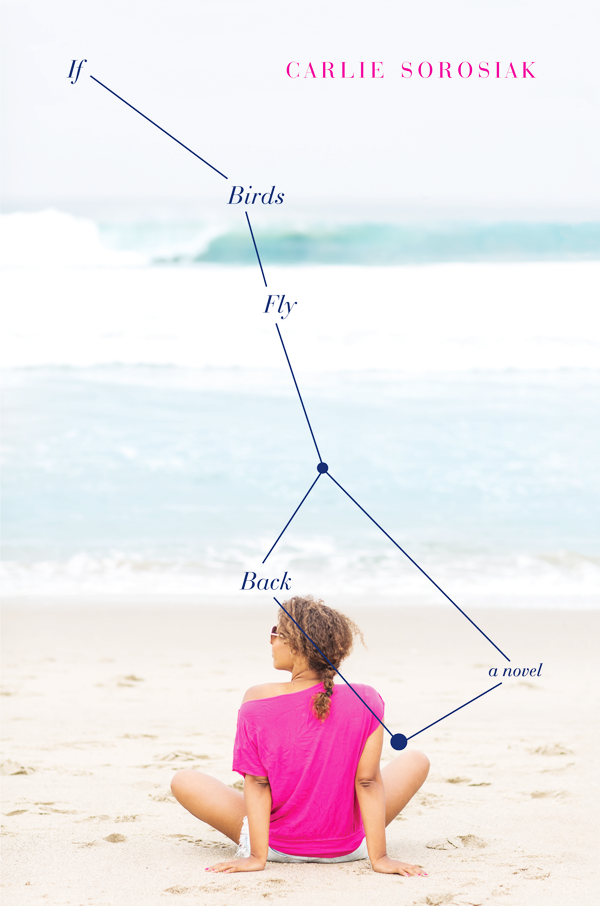 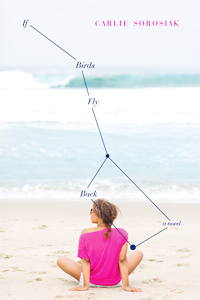 Linny’s sister, Grace, ran away in the middle of the night six months ago, taking all the color with her and leaving Linny’s world in black and white. To try to understand why her sister left, she keeps a Journal of Lost and Found, documenting people who disappear and then come back.

Sebastian is about to go to college to study astrophysics. He’s obsessed with the mysteries of the universe, can tell you how many galaxies there are, and knows how much plutonium weighs. But the one puzzle he can’t solve is the identity of his birth father.

They’ve never met, but Linny and Sebastian have one thing in common: they both become fascinated by famous novelist and film star Álvaro Herrera, who just reappeared in Miami for the first time since he went missing three years ago.

As their lives converge around the truth behind Álvaro’s disappearance, Linny and Sebastian uncover the answers they’ve been searching for — and realize that maybe other people had to leave for them to find each other.

As an extra, exciting bonus, Carlie has been kind enough to offer one lucky reader the chance to win a advance reader copy of If Birds Fly Back! This contest is open to U.S. residents only and the prize will be distributed once advance reader copies become available. Please fill out the Rafflecopter form below to enter!