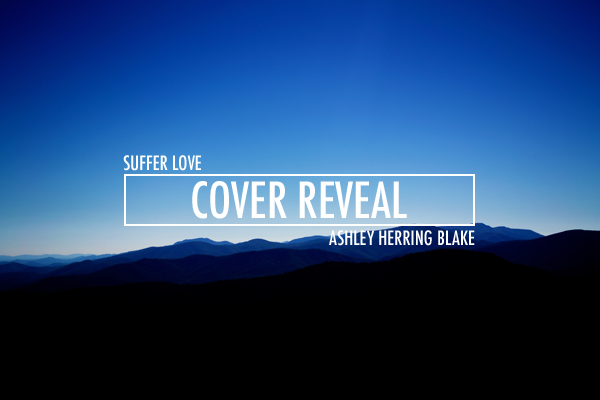 Since Pop! Goes The Reader’s inception two years prior, I’ve been fortunate enough to have been presented with some truly wonderful opportunities. Few, however, have meant quite as much as having been given the chance to read an early draft of my dear friend, Ashley Herring Blake’s 2016 debut novel, Suffer Love, or having been entrusted with the immense privilege of assisting with her cover reveal here today.

Set to be published by Houghton Mifflin Harcourt next year, Suffer Love is an intense, intoxicating contemporary romance that explores complex issues from an exquisitely rendered, alternating dual point of view from the perspective of our two protagonists, Hadley and Sam. In short, I can’t recommend Suffer Love strongly enough. If this novel isn’t already on your 2016 to-be-read list, I suggest you remedy that. Immediately.

Please read on to find an exclusive interview with the author, a giveaway for a signed ARC of Suffer Love and the breathtaking cover reveal for what I feel confident in declaring will prove one of the most moving, the most powerful, and the most unforgettable contemporary releases of 2016. 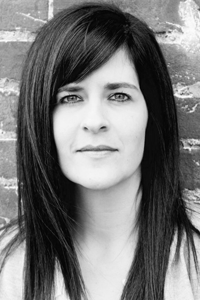 Ashley Herring Blake used to write songs and now she writes books. She reads them a lot too. She likes coffee, her boys, moody music, anything with pumpkin in it, stuff hued in Tiffany blue, scarves, and walks. She doesn’t like olives or soggy asparagus or humidity, and has not a lick of visual artistic talent. Ashley lives in Nashville, TN with her witty husband and two boisterous little boys. Previous jobs include songwriter and performer (though she made about enough money to cover the gas to the gigs), barista, Applied Behavioral Analysis therapist, teacher, and mommyhood. Suffer Love, a YA contemporary novel that follows two teens as they wade through an intense relationship complicated by their parents’ infidelities, is her first novel and will be published by Houghton Mifflin Harcourt BFYR in 2016.

01. First, please tell us a little more about yourself. If you could describe yourself in only five words, what would they be?
Sassy, introspective, witty, attentive, nerdy.

02. Did you always know you wanted to be an writer? If not, what did you dream of becoming?
I actually didn’t always want to be a writer, but I think that desire was always there, sort of lurking under everything else. When I was a kid I wanted to be a broadway singer, a marine biologist, and a teacher. I went on to become that last one, but writing was always present in my life. I wrote a lot of poetry as a teenager and young adult. Prior to fiction, I was more into writing memoir-esque nonfiction and essays. I didn’t really throw myself into writing fiction until I fell in love with books for middle graders and young adults about eight years ago.

03. When you’re not writing, what do you like to do in your spare time?
Read. And then I read some more. Take a break for Twitter and Pretty Little Liars and then I finish what I was reading. Okay, it’s not that bad. Okay, yes it is. But I have two little boys and a husband and lots of great friends with whom I like to rub elbows occasionally and they keep me pretty busy. But I’ve always been a big reader and I get socially exhausted pretty easily. I’m the definition of an introvert, and recharge through reading and quiet. So basically, I’m one big snore to hang out with.

04. What was your favourite book as a child?
Wait Till Helen Comes by Mary Downing Hahn. It’s a ghost story and I still love it and reread it occasionally. Funnily enough, I did not grow up to write ghost stories, but something abut this particular one pulled at my heart as a kid, because it’s mostly about a lonely girl trying to not be lonely.

05. What book(s) can currently be found on your bedside table?
I’m annoyingly particular about my books, so there are none on my bedside table, Jen. They are neatly tucked away in their color-coded shelves! Right now I’m reading The Serpent King by Jeff Zentner and whoa, guys whoa. Put this on on your TBR lists stat. On my shorter to-read list is Every Last Word by Tamara Ireland Stone, The Start of Me and You by Emery Lord, Three-Day Summer by Sarvenaz Tash, and The Summer Of Chasing Mermaids by Sarah Ockler. The books I want right now but can’t get my grubby paws on for a while is This Is Where It Ends by Marieke Nijkamp and Symptoms of Being Human by Jeff Garvin.

06. Let’s talk about your novel! If you could describe Suffer Love in only five words, what would they be?
Family, secrets, betrayal, kissing, forgiveness.

07. Suffer Love explores the tumultuous (and utterly intoxicating) relationship between protagonists Hadley and Sam, a relationship often complicated by secrets, deception and circumstances beyond the characters’ control. What inspired you to write this particular story?
Honestly, the dynamic between two people in such a relationship fascinated me. I was taking a walk one day, thinking through some story ideas, and these two just popped in my head. I saw two teens sitting in school, thrown together by circumstance, who already had a fraught history of which they weren’t even aware. I wanted to explore how that might play out as a surface relationship turned into something deeper. At first, Hadley was the only narrator, but then I realized that I had to include Sam’s perspective if I was really going to tell the story that needed to be told. I fought it, because dual POV scared the bejeezus out of me, to be honest, but I’m so glad I did. I loved writing Sam.

08. Literary references, particularly that of Shakespeare, abound in Suffer Love. If you were to be transported into one world of Shakespeare’s creation tomorrow, which would you choose and why?
Oh wow, excellent question. Well, I definitely wouldn’t want to end up in one of the tragedies, as much as I love Othello. I think I’d like to be a fly on the wall in Twelfth Night. I love the setting and come on, shipwrecks! The story is really fascinating to me, with all the disguises and deceptions. But at its core, I love that it explores how the nature of love defies gender. Olivia falls in love with Cesario, who is really Viola disguised as a man. Olivia doesn’t end up with Viola, much to my disappointment, but I appreciate how the story pushes those boundaries — love is love is love.

09. Tell us a little more about your writing process. Do you have a particular routine? Is there a time of day or writing space in which you best like to work?
When I’m drafting, my one rule is that I write every day. I usually like to hit somewhere between 500-2000 words, depending on the time allotted me. I have two small kids, so summer is challenging, but during the school year, I usually try to write in the morning. When I’m working, I just fit it in when I can, usually at night, and make sure I hit a word count or that the words I’m able to get down move the story forward. In my house, I usually write on the couch in my library — that’s not as fancy as it sounds, I just like pretending I actually have one — or at my desk in my little cubby hole of an office. I also like writing at coffee shops.

10. Do you like to listen to music when you write? If so, is there a song or songs you feel best capture the mood and feeling of Suffer Love?
I listen to music when I write if there are outside sounds that need to be blocked. If I’m in a coffee shop or at home and my husband is watching TV or something, I’ll pop in my earbuds. If I’m alone, I usually go without. I can do either, but I like the quiet just as much as some moody songs. For Suffer Love, there’s is one song that I feel is absolutely perfect for Sam and Hadley and that is Hozier’s “Like Real People Do”. This song wasn’t even out when I was drafting, but my agent emailed me one day last fall, exclaiming how perfect it it was, and she was totally right.

11. It has often been said that an author should write what they know. How much, or how little, of Suffer Love is comprised of your own personal experience?
My parents divorced when I was sixteen. There was an affair involved, but I definitely remember feelings of confusion, anger, and even a little bit of relief. Common as it is, it’s still a strange experience for a teen and one that will effect them for the rest of their lives. As an adult, I still dealt with the repercussions of my parents’ split, even though it was the best thing for everyone. But really, I think most of what I put into the book stemmed from my experience with the simple fact that relationships are hard and complicated and don’t always follow logic or even what’s right or wrong. The heart wants what the heart wants is a very true saying, in my opinion. Should we always act on that? Well. That’s the question, isn’t it?

12. Finally, Suffer Love is your debut publication. What has been your favourite part of the debut publishing experience thus far?
The community. Hands down. I’m part of two debut groups, one large and one small, and the friendships I have through those are invaluable. Having a book coming out has also enabled to me to be part of the YA community, that, for all its occasional drama, is a damn good group of people. I think about my life a year ago, about the fact that there are so many people I know now and call friends that I didn’t then, and I’m astounded. I’m grateful and honored and I can’t wait to see what — and who — the next year will bring into my life. 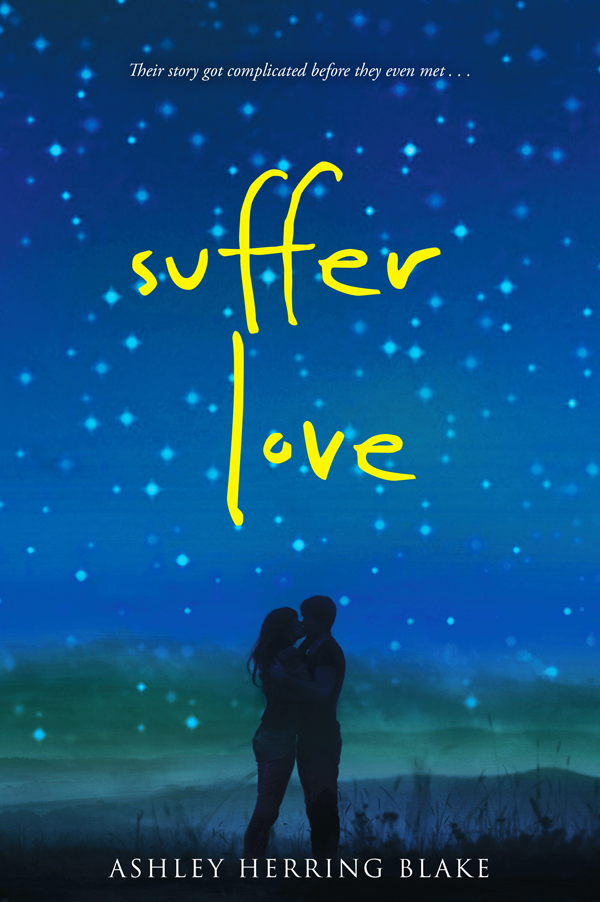 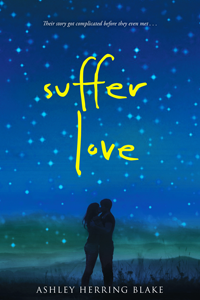 Seventeen-year old Hadley St. Clair’s life changed the day she came home to a front door covered in slips of paper, each of them shouting the ugly truth about her father and his year-long affair. Now, Hadley just wants her father to leave her alone. In fact, she wants everyone to stop expecting her to slip back into her old life, where a father is someone she can trust and romance is something that happens to real people, not just to characters in fairy tales. She knows how to handle herself – trust no one and feel nothing. She falls into a steady routine of ignoring her parents and messing around with nameless boys who help her forget.

Then she meets Sam, the new boy with a broken family and a little sister who adores him. Despite her efforts to shut him out, something in Sam feels familiar and even exciting. She might be willing to take a risk for a guy like him. Sam wants Hadley just as much as she wants him, even though he knows he shouldn’t. Because Sam has a secret that could ruin everything; a secret he’s been keeping since the day somebody taped dozens of papers to the St. Clair’s front door.