New Kids On The Block 2018 with Diane Magras 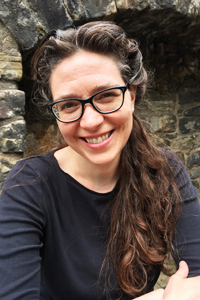 Diane Magras grew up on Mount Desert Island in Maine. The Mad Wolf’s Daughter is her debut novel. She is the editor, writer, and chief fund raiser for the Maine Humanities Council. She volunteers at her son’s school library, and is addicted to tea, toast, castles, legends, and most things medieval. Diane lives in Maine with her husband and son and thinks often of Scotland, where her books are set

The world is full of gender roles, rigidly defined. They begin when we’re young in the earliest stories we read. In those stories, there is always a hero, and often a heroine. Primary and secondary characters. Acting and reacting.

That’s beginning to change in the books children are reading these days. But not quickly. You can tell because we’re still having discussions about boys’ books and girls’ books, with adults unintentionally — and in some cases quite intentionally — reinforcing stereotypes of what kids should read.

I grew up at a time when no one was talking about this.

I’ve always loved classic adventure stories and fast-paced fantasies, and those had a powerful effect on my childhood. When I was a kid, I always wanted to be the young knight with the sword. He was the one who had the wild adventures. He fought with great courage. He learned to be brave, to protect the weak, to stand up for what was right.

He was always a he.

Sometimes there were girls. They were usually pretty, petite, described as “fair” in one way or another, concerned with fashion or at least their clothes, and they had gorgeous tresses.

It was no wonder that I associated more with the knights. I wasn’t a tomboy, but I wasn’t a girl in this traditional way, and I didn’t want to be. But everything — from books to television to magazines — told me that this was what a girl should be.

In The Mad Wolf’s Daughter, I’m challenging any notion of what a girl should be. My protagonist Drest is untraditional as a heroine in every sense, and strong in every sense — and every girl or woman she meets in her journey (which is to rescue her war-band leader of a single dad and five vicious but loving brothers from a castle prison) is also strong, but in different ways. Drest carries a sword. Other women use strength of will and character. One old woman intimidates merely by walking into a room. Another controls her household, but quietly in ways that may not be immediately obvious.

Yet Drest puts up a barrier between herself and other lasses. She’s more like her brothers, a warrior, she insists. To her, that’s the world she felt she needed. But what she doesn’t realize — and I hope readers do — is that even her world isn’t just one of battles and feats of strength. It’s one of love. Of tenderness. Of people looking after others, of comforting, of small kindnesses. She’s learned from her brothers’ examples how to be a kind person, how to look out for those who are smaller or younger or weaker, and does. Rather than murder Emerick, the wounded young knight and enemy she finds abandoned at the start of the novel, she pities him—and helps him.

“I never thought I’d find a creature like you here,” Emerick — who becomes her hostage, her guide on her journey, and later her companion — tells her early on. When she asks what he thought he’d find, he answers: “Nothing but bloodthirsty villains.”

Drest retorts gruffly, “How do you know I’m not one?”

Yet she’s proven already that by helping him, by caring for his wounds as she’s seen her brothers care for each other’s wounds, she’s far from bloodthirsty.

Drest’s is a world where she insists she is as strong and tough as any man, but a lifetime of tenderness shown to her by men have helped her develop a powerful moral center of her own.

I admit, I wanted to have it all in this book: a fast-paced adventure filled with tension and battles starring a physically powerful girl, co-starring emotional boys, mixing up within a twisty plot both the hallmarks of so-called “boys’ books” (action, fights, tension) and “girls’ books” (love, introspection, and feelings) — as my kindhearted, fierce lass fights first and feels second, and my brave lads feel first and fight very little.

I think readers should have it all: A wild adventure bringing up themes of what it means to be a hero, a legend, to be brave — with plenty of sword fights — starring a girl who’s gentle underneath it all — and thoughtful boys who count on her to rescue them.

That, dear reader, is what you’ll find in this book. I hope you enjoy it. 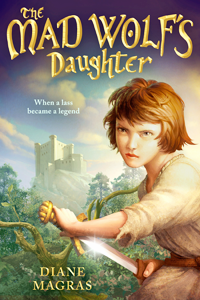 A Scottish medieval adventure about the youngest in a war-band who must free her family from a castle prison after knights attack her home–with all the excitement of Ranger’s Apprentice and perfect for fans of heroines like Alanna from The Song of the Lioness series.

One dark night, Drest’s sheltered life on a remote Scottish headland is shattered when invading knights capture her family, but leave Drest behind. Her father, the Mad Wolf of the North, and her beloved brothers are a fearsome war-band, but now Drest is the only one who can save them. So she starts off on a wild rescue attempt, taking a wounded invader along as a hostage.

Hunted by a bandit with a dark link to her family’s past, aided by a witch whom she rescues from the stake, Drest travels through unwelcoming villages, desolate forests, and haunted towns. Every time she faces a challenge, her five brothers speak to her in her mind about courage and her role in the war-band. But on her journey, Drest learns that the war-band is legendary for terrorizing the land. If she frees them, they’ll not hesitate to hurt the gentle knight who’s become her friend.

Drest thought that all she wanted was her family back; now she has to wonder what their freedom would really mean. Is she her father’s daughter or is it time to become her own legend?

Don’t forget to visit all the wonderful stops along The Mad Wolf’s Daughter blog tour for a variety of guest posts, reviews, and much, much more!