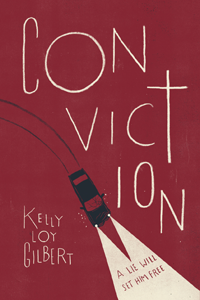 Ten years ago, God gave Braden a sign, a promise that his family wouldn’t fall apart the way he feared.

But Braden got it wrong: his older brother, Trey, has been estranged from the family for almost as long, and his father, the only parent Braden has ever known, has been accused of murder. The arrest of Braden’s father, a well-known Christian radio host has sparked national media attention. His fate lies in his son’s hands; Braden is the key witness in his father’s upcoming trial.

Braden has always measured himself through baseball. He is the star pitcher in his small town of Ornette, and his ninety-four mile per hour pitch already has minor league scouts buzzing in his junior year. Now the rules of the sport that has always been Braden’s saving grace are blurred in ways he never realized, and the prospect of playing against Alex Reyes, the nephew of the police officer his father is accused of killing, is haunting his every pitch.

Braden faces an impossible choice, one that will define him for the rest of his life, in this brutally honest debut novel about family, faith, and the ultimate test of conviction.

Conviction is a haunting examination of a family in crisis after a single, gruesome event catapults three people into the spotlight and forces them to confront the secrets that have long brought them together and torn them apart. Between his mother’s abandonment, his father’s volatile temper and his older brother estrangement, sixteen-year-old Braden Raynor’s life has always been one of turmoil, dysfunction and, far too often, abuse. Nothing could prepare Braden for life’s most unexpected curveball, however, when his father, a respected evangelical radio host and a pillar of their small community, is accused of murdering a Latino police officer from a neighbouring county, a man who also happens to be the uncle of one of Braden’s biggest baseball rivals. As the sole witness to the events of that fateful, now infamous evening, Braden must grapple with mounting pressure at home, at school and on the baseball field as he prepares to testify at his father’s trial, testimony on which the outcome of the trial, and his father’s very life, will ultimately rest. In what will prove a challenging and complex choice between love, loyalty, duty and moral responsibility, Braden will be forced to question his role as a son, a brother, a Christian and a ball player, in addition to being forced to question the courage of his convictions. Using Braden as her subject, Gilbert’s conclusions about the insidious consequences and legacy of mental, emotional and physical abuse are harrowing and heartbreaking but never without hope as this phenomenally talented debut author also explores the possibility and power of second chances and alternate support systems in combating this destructive influence. Conviction reads, in part, like a taut psychological thriller as Gilbert gradually reveals sparse and poignant details from Braden’s past over the course of the narrative, leaving the precise events of the night in question, Braden’s father’s guilt, and the nature and outcome of Braden’s testimony in doubt until the novel’s breathless conclusion. Prospective readers should be aware that Conviction does contain elements of homophobia. While this makes sense within the context of the story given Braden’s religious beliefs and the rigidity of his upbringing, there were moments when this felt like an unnecessary addition to an already challenging and somber story and which might prove understandably upsetting for some readers. As a result, I couldn’t help but wish this element had been more overtly challenged within the text, or entirely omitted altogether. Despite this, however, Conviction is almost certainly a novel that is not to be missed. A meticulous, heart-wrenching meditation on family, faith, forgiveness, loyalty, and morality, Kelly Loy Gilbert’s unforgettable 2015 debut is a woefully under-appreciated powerhouse whose maturity and complexity reminds readers of the very best young adult fiction has to offer.