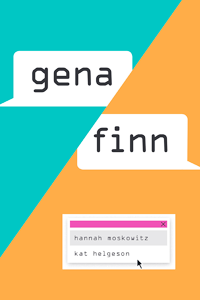 The story follows the unlikely friendship of two young women forged via fan fiction and message boards, and is told entirely in texts, chats, and blog posts.

Gena (short for Genevieve) and Finn (short for Stephanie) have little in common. Book-smart Gena is preparing to leave her posh boarding school for college; down-to-earth Finn is a twenty-something struggling to make ends meet in the big city. Gena’s romantic life is a series of reluctant one-night-stands; Finn is making a go of it with long-term boyfriend Charlie. But they share a passion for Up Below, a buddy cop TV show with a cult fan following. Gena is a darling of the fangirl scene, keeping a popular blog and writing fan fiction. Finn’s online life is a secret, even from Charlie. The pair spark an unlikely online friendship that deepens quickly (so quickly it scares them both), and as their individual “real” lives begin to fall apart, they increasingly seek shelter online, and with each other.

_EvenIf’s Journal ● I watch a lot of Up Below and write a lot of fanfic and shoot a lot of heroin. One of those is false. I do a mean French braid.

Genevieve “Gena” Goldman is an eighteen year old high school senior and former child star preparing to embark on the next stage of her life, if only she can learn to leave the past behind. Stephanie “Finn” Bartlett is a twenty-two year old recent college graduate struggling to navigate an uncertain future, if only she can decide what she truly wants. Separated by thousands of miles and a lifetime of vastly different experiences, under ordinary circumstances these two young women may never have met were it not for the one connective thread that allows them to scale even the most divisive of differences. Passionate fans of the television drama, Up Below, Gena and Finn become fast friends after exchanging fan fiction and fan art about the show and the characters to which they’re so devoted. As secrets are shared and the two continue to grow closer, what begins as a simple friendship rapidly becomes something else entirely. Though precisely what, they’re unsure. As Gena and Finn support one another through some of life’s most difficult challenges – failing relationships, mental illness, dysfunctional families, and even death – the two become entangled in an increasingly intense and complicated relationship they can neither define nor entirely understand.

Private message to _EvenIf
Oh, shit. How old are you?

Private message to FinnBlueLine
Eighteen. And actual eighteen, I promise, not internet-eighteen.

Private Message to _EvenIf
Okay. Okay. Sorry, didn’t mean to freak out on you. Eighteen’s fine. You said Jake was old and I was picturing you as a thirteen year old. Although you write REALLY well for thirteen…

I mean, you write really well for eighteen, too. It’s not really an age thing. You write well for a human.

I am FANTASTIC at compliments.

Fangirl is my name. Becoming emotionally invested in fictional worlds, characters and relationships is my game. Yes, long before Pop! Goes The Reader was but a twinkle in this book blogger’s eye, I was an insatiable, unabashed Fangirl with a capital ‘F’. From Roswell to Buffy The Vampire Slayer, Six Feet Under to Veronica Mars, I dedicated days, weeks, and even months of my life to deconstructing dialogue, creating fan art and reading every piece of fan fiction I could find. Given my personal history, it should therefore come as no surprise that I felt an instant kinship with Kat Helgeson, Hannah Moskowitz, and the story they have chosen to tell in their forthcoming 2016 release, Gena/Finn. I was so excited about the novel, in fact, that I leapt at the opportunity to participate in the blog tour – something I rarely, if ever, do – and I’m so pleased that I did. Empowering, enthralling and emotionally expansive, Gena/Finn is a modern epistolary novel for the social media-savvy that explores women’s relationships with themselves, each other, and the world around them.

Private message to _EvenIf
Hey…
So, stop me if this is weird, but some stuff is happening and I can’t really talk to any of my three-dimensional friends about it. Do you mind if I unload a little? I understand if not. I just feel like you get me, or something. Am I crazy? Don’t answer that.

Though the classification of this novel as LGBTQ fiction feels a little misleading given the arguably heteronormative direction the story ultimately takes, Helgeson and Moskowitz remind readers that sexual orientation is a vast and complex spectrum and that self-identifying is a deeply personal process that does not need to be understood by others in order to be considered valid. Gena and Finn’s feelings for one another defy explicit classification, nor do they require it. The authors’ exploration of this subject matter is intricate and complicated, allowing for different interpretations based on the unique history and perspective of the reader. However one chooses to interpret this relationship, however, the chemistry between the two characters is undeniable as Helgeson and Moskowitz perfectly capture the intoxicating and overwhelming act of falling in love, romantically or otherwise. Gena/Finn‘s celebration of the importance of positive female relationships is much-appreciated, particularly the novel’s emphasis on women as a source of empowerment and an unconditional support system. This sense of female empowerment is further reflected in the book’s exploration of the intersection of women in fandom, which is never portrayed as silly or inconsequential, but rather as a way for women to passionately, actively and critically engage with what they’re reading or viewing. Gena and Finn’s dedication to and investment in Up Below felt genuine, accurate and infectious and will prove rewarding and recognizable to those familiar with this lifestyle.

Can I ask a question? And I’m being completely sincere about this; I really want to know. To the people who were let down by this week’s episode- what would you have had happen? Because it’s not like anyone was happy a few weeks ago when Jake and Ty were at each other’s throats. So I’m confused. What’s the solution?
Personally, I couldn’t be happier with the show. Maybe I took the “fan” in “fandom” too literally?

Move over, Bridget Jones, there’s a new kid in town! Written in the form of blog posts, journal entries, comments, fan fiction, fan art, poetry, post-it notes, texts, emails and instant messages, Gena/Finn is a hip, modern epistolary novel for the next generation. While this mixed-media format might appear a little intimidating given that the book does not follow a typical narrative structure, readers will quickly find this concern misplaced as anyone with a passing familiarity with the internet and social networking will be able to navigate the text with ease. Gena/Finn would make an excellent choice for reluctant readers as the sparse, straight-forward narrative style and conversational, informal tone make the novel easy to devour in a matter of hours. Gena/Finn is told from the alternating perspectives of the two titular characters, allowing for a more intimate knowledge of both, and authors Helgeson and Moskowitz are always careful to clearly identify who is speaking through the use of both explicit title pages as well as the characters’ unique and distinct voices. Both the comedic and tragic elements are well-rendered, if a little discordant with one another. There is a distinct tonal shift in the latter half of the novel that feels inconsistent with the mood and direction of the story established prior, during which time the novel also loses a great deal of momentum. Despite this, however, Gena/Finn remains an engrossing and compulsively readable tale.

Searching for realistic fiction with a twist? Look no further. Gena/Finn is a thought-provoking novel that delves deeply into the relatively unexplored world of fandom and the lives and personalities of the people who populate it. At times lyrical and hysterical, at others tragic and heart-wrenching, readers will run the emotional gamut as Helgeson and Moskowitz explore the various facets of Gena and Finn’s ever-evolving relationship with each other, as well as with themselves. Though there were moments when the novel faltered – suffering from a discordant tonal shift, a loss of momentum, and a troubling heteronormative conclusion – I would not hesitate to recommend Gena/Finn to prospective readers searching for a fun, modern, creative take on the epistolary novel that’s unafraid to explore more challenging subject matter.

● Amber @ Book Stacks Amber wrote “I absolutely LOVED this book until three quarters of the way through, when things took a turn.” (Read the rest of the review Here!)

● Leila @ Bookshelves Of Doom wrote “Gena/Finn is a love letter to fandom, but it’s an honest love letter, one that acknowledges its warts as well as its beauty marks.” (Read the rest of the review Here!)

● Maren @ The Worn Bookmark wrote “It was fun in the beginning but the dark twist felt out of place. However, I did still enjoy reading the book. It wasn’t amazing but it was good.” (Read the rest of the review Here!) 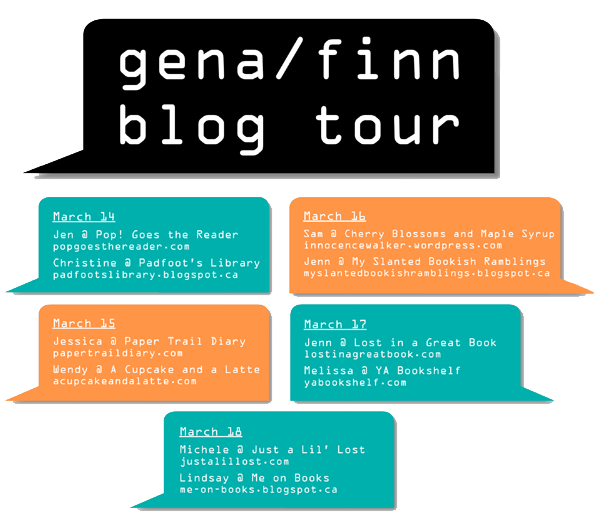 As part of my participation in the Gena/Finn blog tour, I was given the opportunity to ask authors Kat Helgeson and Hannah Moskowitz one question. I asked:

“Given the novel’s emphasis on and celebration of the importance of female connection, what are some of your favourite literary female relationships, platonic or romantic?”

Here’s what they had to say:

Kat Helgeson
Willowdean and Ellen from Dumplin’ by Julie Murphy, Reagan and Tori from Just Visiting by Dahlia Adler, Astrid and Dee from Ask the Passengers by A.S. King, and Etta and Rachel in Not Otherwise Specified by Hannah Moskowitz.

Hannah Moskowitz
Christina and Elizabeth from Feeling Sorry For Celia by Jacyln Moriarty, the Casson sisters in Hilary McKay’s Casson Family series, Celie and Shug from The Color Purple, the dysfunctional realness of Lia and Cassie in Wintergirls by Laurie Halse Anderson…and it’s not literary, but I can’t leave out Cristina and Meredith from Grey’s Anatomy.

Don’t forget to visit the other stops on the Gena/Finn blog tour for reviews, interviews, and much, much more!