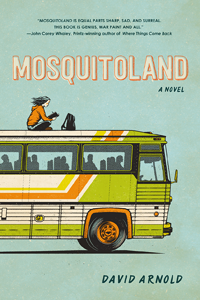 After the sudden collapse of her family, Mim Malone is dragged from her home in northern Ohio to the “wastelands” of Mississippi, where she lives in a medicated milieu with her dad and new stepmom. Before the dust has a chance to settle, she learns her mother is sick back in Cleveland.

So she ditches her new life and hops aboard a northbound Greyhound bus to her real home and her real mother, meeting a quirky cast of fellow travelers along the way. But when her thousand-mile journey takes a few turns she could never see coming, Mim must confront her own demons, redefining her notions of love, loyalty, and what it means to be sane.

Dear Isabel,
As a member of the family, you have a right to know what’s going on. Dad agrees but says I should avoid “topics of substance and despair.” When I asked how he proposes I do this, seeing as our family is prone to substantial desperation, he rolled his eyes and flared his nostrils, like he does. The thing is, I’m incapable of fluff, so here goes. The straight dope, Mim-style. Filled to the brim with “topics of substance and despair.”

Her name is Mary Iris Malone, and she is not okay. Her mother is missing (and sick). Her father is remarried (and clueless). Her step-mother is overbearing (and pregnant). Which, in Mim’s mind, all add up to a life filled to the brim with nothing but topics of substance and despair. So, Our Heroine, armed with nothing more than the meagre contents of one JanSport backpack and eight hundred dollars pilfered from the back of her stepmother’s hosiery drawer, hops a Greyhound bus set for Cleveland, Ohio where her mother is suffering from ailments unknown. What follows is a maelstrom that will sweep Mim across hundreds of miles and into an innumerable number of lives. From the wastelands of Jackson, Mississippi to the greener pastures of Cleveland, Ohio, Mary Iris Malone will embark on an odyssey that reminds us that one’s family is composed of more than coincidence and chromosomes and that home can often be found in the most unlikely of places.

From a thousand miles away, I feel my mother needing me. This is a thing that I know, and I know it harder, stronger, fuller than I’ve ever know any other thing.
Four days until Labour Day.
Ninety-six hours.
I can’t be late.

Fresh. Honest. Offbeat. Authentic. Eccentric. Heartbreaking. Hopeful. Incomparable. Unforgettable. These are just a few of the words that come immediately to mind when I think of David Arnold’s masterful 2015 debut, none of which feel remotely adequate in capturing even a smidgen of what I feel for this novel. In truth, Mosquitoland defies description because it is, by its very nature, quite unlike anything I’ve ever read before. Good writers tell a story but great writers make a story come to life and Arnold’s story – Mim’s story – is one I will cherish for many years to come.

Every great character, be it on page or screen, is multidimensional. The good guys aren’t all good, the bad guys aren’t all bad, and any character wholly one or the other shouldn’t exist at all. Remember this when I describe the antics that follow, for though I am not a villain, I am not immune to villainy.

Mother-effing Mother-Saver. Mutineer Extraordinaire. Cycloptic Wonder. Storytelling Lackey. Samaritan Avenue Vagabond. Darling Of Celestial Kitsch. Mary Iris Malone is not merely a character, but a force of nature. A collection of oddities, a circus of neurons and electrons, Mim is far more than the sum of her parts, more than her displaced epiglottis or solar retinopathy, more than her sharp edges and even sharper mind. It’s rare that readers are fortunate enough to encounter a character drawn with this much depth, clarity of focus and strength of voice, whose every breath and heartbeat you feel as vividly as you do your own. Perhaps most admirable of all is the author’s resolute, courageous commitment to authenticity, even at the expense of traditional ‘likeability’. At times angry, resentful and impulsive, at others generous, affectionate and wise beyond her years, Mim is caught in the middle ground between adolescence and adulthood as Arnold reminds us that we love people not in spite of their flaws, but because of them. Armed with a tube of lipstick, a questionable English accent, and a worldview unlike any explored in the young adult market before, Mary Iris Malone is a foul-mouthed, whip-smart, effervescent-eccentric who will hold readers’ hearts in the palm of her hand and refuse to let go for a single second. I am better for having known her.

Mosquitoland: The thorn in my side, the rock in my shoe, the poison in my wine.

The novel is written in two alternating narrative styles. While the majority of Mosquitoland is told in first person, present tense as Mim recounts events directly to the reader, the novel is also interspersed with the occasional epistolary passage in which Mim is writing to ‘Isabel’, a mysterious figure in her life whose identity is not revealed until the conclusion of the novel. Both perspectives offer valuable insight into Mim’s character and present an interesting study in contrasts, the latter of which was of particular interest to me. It is in these letters that we see a more analytical side of our heroine as she imparts hard-earned wisdom and turns her critical, ever-watchful gaze inward to explore her own behaviour in greater depth. No matter the medium, however, Mim remains a thoroughly unreliable narrator. With her sanity regularly called into question, fantasy and reality coalescence and abnormalities abound, like a Technicolour dream, allowing Arnold to create an ethereal and otherworldly reading experience where nothing, and no-one, are quite what they appear to be. As to the writing itself, Arnold’s prose is pure poetry in which every sentence, every syllable, demands to be savoured and appreciated. Most importantly of all, however, the author never scarifies substance for style. Mosquitoland explores a number of important topics including (but not limited to) mental illness, sexual assault and suicide, allotting each the time, care, and attention they deserve.

I stare at myself in the fluorescent light and finally feel like the girl I am. The girl who gets called to the principal’s office but hops a bus to Cleveland instead. The girl who survived a catastrophic accident. The girl who took matters into her own hands, figuratively, literally, fucking finally.
I feel more Mim than ever before.

A great number of stories pass through my hands over the course of a single year. Stories about love. Stories about life. Stories about loss. Stories of friendship, of heartache, of hardship, and of triumph. Hundreds of stories, each with their own value and their own voice, waiting to be discovered by the perfect reader at the perfect time. But few will leave as lasting, or as meaningful, an impression as David Arnold’s impeccable 2015 debut. Unflinching, unpredictable, enthralling, outlandish, and absolutely breathtaking, Mosquitoland marks one girl’s extraordinary pilgrimage of truth and discovery in a novel that reminds us that arriving at one’s destination is merely the beginning. The truth is that the world is full of topics of substance and despair. Absolutely bursting with them. But with work as eloquent, as beautiful, and as inspiring as David Arnold’s Mosquitoland to guide us, life is made just a little bit brighter. Mary Iris Malone will be okay and so will you.

● Sara @ The Hiding Spot wrote “Mosquitoland is one of those books that I love so deeply that writing any kind of coherent recommendation is near impossible. “ (Read the rest of the review Here!)

● Nicole @ The Quiet Concert wrote “This book is just bursting with personality. It is a collection of people and moments and feels that will stick with me for a long time.” (Read the rest of the review Here!)

● Larissa @ YA Midnight Reads wrote “The journey was equal parts vivid satisfaction followed by intense pain. It was an emotional roller-coaster of sorts, bonded together with an strong and memorable supporting cast that I won’t soon forget.” (Read the rest of the review Here!)