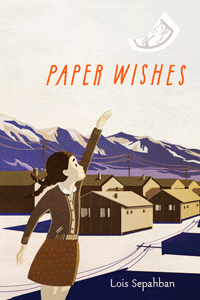 A moving debut novel about a girl whose family is relocated to a Japanese internment camp during World War II – and the dog she has to leave behind.

Ten-year-old Manami did not realize how peaceful her family’s life on Bainbridge Island was until the day it all changed. It’s 1942, after the attack on Pearl Harbor, and Manami and her family are Japanese American, which means that the government says they must leave their home by the sea and join other Japanese Americans at a prison camp in the desert. Manami is sad to go, but even worse is that they are going to have to give her dog, Yujiin, to a neighbor to take care of. Manami decides to sneak Yujiin under her coat, but she is caught and forced to abandon him. She is devastated but clings to the hope that somehow Yujiin will find his way to the camp and make her family whole again. It isn’t until she finds a way to let go of her guilt that Manami can accept all that has happened to her family.

From the mysterious posters – “Evacuate!” – to her family’s stolen glances and whispered secrets, Ten-year-old Manami Tanaka is beginning to suspect that something is very wrong in the quaint, seaside community of Bainbridge Island, Washington. Then, the soldiers arrive. When Manami and her family are informed that they must relocate to an interment camp for American residents of Japanese ancestry in the stark and arid desert landscape of the Sierra Nevada, Manami is understandably confused and unsettled at the idea of leaving behind the only home she has ever known. Nothing upsets her more, however, than the prospect of saying goodbye to her loyal and beloved dog, Yujiin. Forced to reduce their lives to what can be packed within the confines of a single suitcase, Manami is left with no choice but to leave Yujiin behind in a heart-wrenching separation that renders her mute. In the days, weeks, and months that follow she and her family will be forced to navigate an increasingly difficult and uncertain reality in confinement as Manami continues to search for Yujiin, as well as her voice.

We step off the train and board the waiting buses. The buses will drive us to our destination.
As we get closer, I see bits and pieces through my window.
Fence.
Barbed wire.
Guard tower.
Buildings covered with black paper.
Red dirt.
I read the sign: Manzanar.
It is ugly.
…
“It is a prison,” she says.
“The soldiers say it will be a village,” Father says. “We will make it a village.”

A powerful and unforgettable story of loss, hope and the resilience of the human spirit, Lois Sepahban’s 2016 middle grade debut proves that there is no age limit on an exceptional story. As many politicians attempt to institute fear, prejudice and racism as a matter of public policy, it seems there is no better nor a more relevant or important time for this novel, both for our children as well as ourselves. Paper Wishes explores one of the darkest and most shameful periods in American history when, in the wake of Pearl Harbor, over 100,000 Japanese Americans, the majority of whom were United States citizens, were forcibly relocated into interment camps simply because of their heritage. Debut author Lois Sepahban explores this difficult subject matter with sensitivity and grace in a novel that speaks volumes despite its relative brevity.

If I stand tall with my feet bare, I can pretend the dirt feels like sand here.
But when I open my mouth to speak, the dirt no longer feels like sand. It sticks to my lips and tongue like red mud. It coats my throat so that I cannot speak.
I think this is what has happened to me.
I wish the dirt would cloud my eyes, too, so that I would not see this place that is and is not my home without Yujiin.

At the very core of this novel beats the heart of a vulnerable, sensitive, creative, compassionate, thoughtful, generous little girl. Ten-year-old Manami Tanaka is a character whose innate innocence and quiet forbearance are sure to capture even the most hardened reader’s heart. Traumatized by her family’s forced relocation and the loss of her beloved dog, Yujiin, Manami becomes mute and is left without a voice to express the depth of fear, guilt, resentment and loss she has experienced. Instead, along with the help of her family and her kind teacher, Miss Rosalie, Manami turns to other outlets in order to explore and convey these feelings. She draws pictures from memory, invoking places or moments in her past which bring her joy and comfort. She also becomes engrossed in tending her mother’s garden, nurturing the few seeds they were able to salvage from home and encouraging the roots to grow strong and deep, much like the fortitude and spirit of resistance that begins to blossom within the camp. Finally, convinced that Yujiin will one day return to them, Manami begins to make the eponymous ‘paper wishes’, writing down her deepest hopes and dreams before relinquishing them into the wind. While Sepahban describes the difficult conditions within the prison camp and the lives and feelings of those held within it, touching upon important issues like civil rights and interracial relationships, Paper Wishes is ultimately rooted in Manami’s personal story. Her immense grief and guilt over losing Yujiin and her quiet desperation to get him back creates a taught, powerful narrative that will steal readers’ breath as well as their heart. Sepahban’s rendering of Manami’s emotional journey is poignant and true, capturing the sense of hopelessness and futility so many of us experience when battling against forces largely outside of our control. Perhaps most importantly, Manami’s journey is universal. While her individual circumstances are unimaginable in their cruelty and injustice, the larger issues the author explores – coping with grief and finding one’s voice – are ones sure to resonate with audiences of every age, gender, race, and background.

At a mere 192 pages, readers might mistakenly assume that Paper Wishes is a superficial story, one quickly read and even more rapidly forgotten. Thankfully, this could not be further from the truth. The novel is written with delicate subtlety and grace in sparse, beautiful prose that holds a melody all its own. Sepahban draws a vivid portrait of the period while still allowing the narrative to remain informative and accessible, even for reluctant readers. It is a testament to Sepahban’s immense talent that Manami’s silences speak louder than any dialogue or overwrought soliloquy. In fact, it is often in these moments of stillness, of quiet introspection, in which the novel shines brightest, as the author trusts the reader to draw their own conclusions about the nature of the imprisonment in which Manami and thousands of others unjustly found themselves. Paper Wishes can be a difficult novel to read, but never unfairly so. Though brutality and injustice are inherent in Manami’s reality, Sepahban’s debut is a powerful reminder that love, and hope, can often be found in the most unexpected of places. We see it in Grandfather’s silent understanding. In Kimmi’s unconditional friendship. In Miss Rosalie’s patient kindness. Again and again the author reminds us of the resilience and the triumph of the human spirit against unimaginable odds and the immense strength it must have taken for prisoners like Manami and her family to retain their culture and their humanity in the face of a system that seemed determined to strip them of it.

I sit in the garden and look at what’s left of it.
Mounds with onions and garlic buried inside, hibernating through winter’s freeze.
Mounds with herbs at the end of their life cycle, growing flowers so that there will be herbs for next spring.
Mounds that sit empty, waiting for new seeds to grow into plants.
Strong plants.
Plants with deep roots.
Plants that survive.

Impeccably researched, beautifully written and undeniably moving, Paper Wishes would make an invaluable addition to any classroom, library, or personal collection. Lois Sepahban’s 2016 middle grade debut has solidified the author’s position as One To Watch, creating within it a story rich in emotional authenticity and resonance, which educates and enriches without ever becoming pedantic or inaccessible. If I could release one paper wish into the world, it would be that the publishing world continue to embrace and share stories like this one. Stories that give a voice to the voiceless. Stories that inform. Stories that challenge. Stories that inspire. To be better. To do better. Paper Wishes is the book I have often wished for.

● Sam @ Cherry Blossoms & Maple Syrup wrote “Paper Wishes is a beautiful and melancholy novel. I highly recommend this book if you love learning about Japanese history or you want a touching middle grade tale.” (Read the rest of the review Here!)

● Jessica @ Cracking The Cover wrote “Sepahban’s reserved prose and respectful approach punches you in the gut. The simplicity of its form exposes the intricacies and beauty hidden beneath the surface.” (Read the rest of the review Here!)

● Jess @ The Reading Nook Reviews wrote “Though the book is as equally heart-wrenching as it is beautiful, debut author Lois Sepahban’s tale is ultimately an uplifting tribute to the resilience of the human spirit. Manami’s journey is a humanizing one, which will likely move readers of any age.” (Read the rest of the review Here!)