Short & Sweet Reviews: Bones & All ● You’ll Grow Out Of It 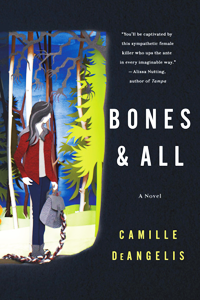 Since she was a baby, Maren has had what you might call “an issue” with affection. Anytime someone cares for her too much, she can’t seem to stop herself from eating them. Abandoned by her mother at the age of 16, Maren goes looking for the father she has never known, but finds more than she bargained for along the way.

Faced with love, fellow eaters, and enemies for the first time in her life, Maren realizes she isn’t just looking for her father, she is looking for herself. The real question is, will she like the girl she finds?

Sixteen-year-old Maren Yearly likes people. Just maybe a little too much. Born with the irrepressible desire to eat the flesh and bones of those she comes to care for, Bones & All is an unconventional coming-of-age story of one girl’s quest to understand who she is, where she comes from, and where she belongs after her mother’s sudden abandonment. DeAngelis’ gory, gruesome tale, alternatively pitched as ‘cannibals in love’, is certainly an acquired taste and may not be the right choice for the faint of heart (or weak of stomach). The author’s descriptions of Maren’s yearnings for and ingestion of human flesh are stomach-churning in their intensity and specificity and will, understandably, act as a deterrent for some readers. Despite the surreal and fantastical nature of Maren’s affliction, however, DeAngelis is careful to ground her tale in some semblance of reality as she uses her protagonist’s unique dietary choices as a platform to explore other, more relatable and realistic issues including loneliness, female sexuality and the morality of flesh-eating (i.e. carnivorousness). Due in part to its heartbreaking conclusions about the inherent loneliness of the human condition as well as its haunting subject matter, Bones & All is not what one might consider a comfortable, pleasant or even a particularly pleasurable read. Despite this, however, the novel should be commended for its ambition and audacity, which create a deeply unsettling reading experience that is certain to leave a lasting impression. Bones & All is arguably worth reading for the novelty of its concept alone, and certainly recommends further exploration of the author’s previous work given her obvious creativity and very capable prose. While DeAngelis’ latest might prove a little too difficult to swallow for some readers, Bones & All would make an excellent selection for those searching for authors unafraid to write outside of the box and explore avenues other writers may not dare. After all, ghouls just want to have fun. 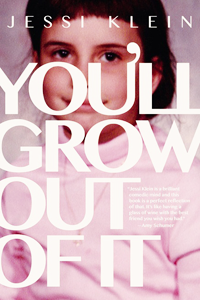 As both a tomboy and a late bloomer, comedian Jessi Klein grew up feeling more like an outsider than a participant in the rites of modern femininity.

Raw, relatable, and consistently hilarious, You’ll Grow Out Of It is a one-of-a-kind book by a singular and irresistible comic voice.

“This was when I learned one of the biggest secrets of being a woman, which is that much of the time, we don’t feel like we’re women at all.” In her new, irreverent collection of comic essays, comedian and writer Jessi Klein explores (and often skewers) the performance and perception of feminism, femininity and womanhood, particularly for those who feel they don’t necessarily prescribe to some – or even all – of the ideals traditionally synonymous with such. Whether she’s examining her physical and psychological issues with bubble baths (“This is why Virginia Woolf stressed the importance of having a room of one’s own. If you don’t fight for it, don’t insist on it, and don’t sacrifice for it, you might end up in that increasingly tepid water, pruning and sweating while dreaming of other things.”) or natural childbirth (“No-one ever asks a man if he’s having a “natural root canal”. No-one ever asks a man if he is having a “natural vasectomy”. GET THE EPIDURAL.”), from porn to periods, proposals to pregnancy, Klein leaves no stone in a woman’s personal and professional life unturned. You’ll Grow Out Of It is a collection that is as enlightening as it is entertaining as Klein segues from the lighthearted (“Victoria’s real secret, or at least it was a secret to me, is that their stores are shitshows.”) to a sincere reflection on the importance of embracing and following one’s dreams. The author’s dry wit, candid commentary and self-deprecating humour create an immediate rapport between herself and her audience as Klein shares hard-earned wisdom and amusing anecdotes that are sure to have readers laughing aloud and turning the pages as quickly as they can. You’ll Grow Out Of It is fun, funny, and would make a fantastic addition to any reader’s bookshelves. Read it now. Thank me later.