Between The Lines: How Zinnia and The Bees Came To Be by Danielle Davis

Hi, friends! Pop! Goes The Reader returns to its regular post schedule today and I’m extra excited because I get to share this very special day with a very special book. Zinnia and the Bees explores the story of its titular heroine, Zinnia, who is convinced her life can’t get any worse until a hive of bees suddenly takes up residence in her hair. An intriguing blend of contemporary issues and the magic of fabulism that is told from the alternating perspective of both Zinnia and her bees, Danielle Davis’ debut is a book Kirkus Reviews called “offbeat and emotionally true” and a story I feel as though I’ve been looking forward to just short of forever.

It also happens to have one of the most charming, colourful and adorable book trailers I’ve ever seen. You know, if you’re into that sort of thing. Which you should be because LOOK AT ALL THE CUTE. Ahem.

The best part of all? Today is Zinnia and the Bees‘s birthday! That’s right, Danielle Davis’ middle grade debut is now officially available in a bookstore and library near you and to celebrate, Danielle has graciously agreed to stop by Pop! Goes The Reader today to talk a little bit more about how Zinnia came to bee! (Pun most certainly intended.) 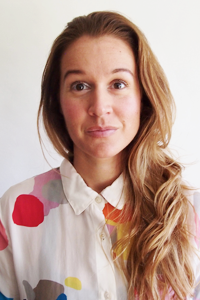 Danielle Davis grew up in Singapore and Hong Kong and now lives in Los Angeles where she reads, writes, and roller skates. She’s earned an M.A. in Literature and Creative Writing and her short stories have been published in literary magazines. She’s had the privilege of teaching English to middle school and community college students and currently volunteers with literary orgainzations in L.A. Zinnia and the Bees is her first novel.

The idea for this book came from an image that popped into someone’s head. But it wasn’t mine. It was my husband’s. He’s an artist and he told me nine or so years ago about an image he’d pictured of a girl with bees around her head. At the time, that girl was sort of me.

I’d been going through a painful season and had developed anxiety, the kind that grows and grows and then blooms into something impossible to ignore or even manage. A little like insects circling around your head – agitating, ever present.

I liked the image very much. But I was curious about that girl. The girl with actual bees on her head. Who was she? Who were the bees? How did they get there? Dreaming up a story became something to think about aside from all my own buzzing thoughts.

I took a leap to give writing a go by attending graduate school and writing short stories for adults. So when this image was delivered to me later, I started it as a long short story, a novella, for grownups. But I’d loved picture books for a long time. I’d taught kidlit to middle school students, and I was starting to read it again on my own. A couple of people actually asked me if the manuscript was meant for kids. It took a few years, but eventually, I decided it was.

When I converted the manuscript into something for a younger audience, the dentist boss became the dentist mother. The bird watching love interest became the bird watching friend. The ergonomic coach neighbor stayed the same. And the bees were there on Zinnia’s head, a metaphor for all the stuff she felt was out of her control.

Things clicked as soon as Zinnia and the Bees found its way to middle grade. And I found so much joy rewriting this manuscript anew. I needed help outside of writing for my anxiety, but there was joy to be found in a story about a knitting, yarn bombing girl with bees on her head, this time with kids in mind. That wasn’t the end of the process, of course. I kept at it for years on and off, with many different versions.

I hope that reading Zinnia’s story helps kids navigate their own versions of bees. As for me, I found my writing home — writing for young readers — in developing her story. And Zinnia finds hers in the end too, a home in herself and the people around her, even when a lot of stuff is out of her control. As for those bees? They also find theirs. 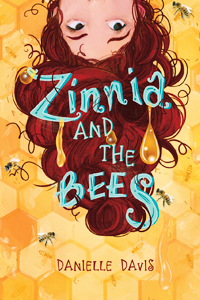 Talk about having a lousy day. While Zinnia’s seventh grade classmates are celebrating the last day of school, she’s cooped up in the vice principal’s office, serving detention. Her offense? Yarn bombing a statue of the school mascot. And when Zinnia rushes home to commiserate with her older brother, Adam, who also happens to be her best friend, she’s devastated to discover that he’s left home with no explanation. Just when it looks like Zinnia’s day can’t possibly get any worse, a colony of frantic honeybees mistakes her hair for a hive and lands on her head!

Told from the alternating perspectives of Zinnia a humorous young loner and knitter and an unintentionally comical hive of honeybees, this quirky, heartfelt novel will strike a chord with anyone who has ever felt alone, betrayed, or misunderstood as it explores the challenges that come with learning to trust yourself and the often messy process of discovering the true meaning to home.