Blog Tour: Symptoms Of Being Human by Jeff Garvin

Hi everyone! Today, I have the immense pleasure of welcoming 2016 debut author Jeff Garvin to Pop! Goes The Reader as I host the latest stop on the blog tour for his new release, Symptoms Of Being Human. Available now from online retailers and a bookstore near you, Symptoms Of Being Human tells the story of Riley Cavanaugh, a gender fluid teen fighting to find their place and combat the prejudices and misconceptions of those around them. For today’s stop on the tour, author Jeff Garvin was gracious enough to allow me to share with you a short excerpt from the opening chapter of the novel, a passage so rich and compelling I feel honoured to host it here today. I can only hope you will enjoy reading it as much as I did. 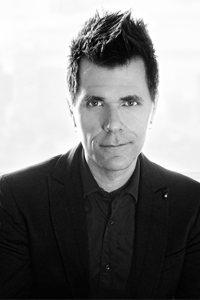 Jeff Garvin grew up in Orange County, California, the son of a banker and a magician. He started acting in high school, and enjoyed a fifteen-year career including guest-starring roles in network television series ranging from The Wonder Years to Roseanne to Caroline and the City, as well as several independent features.

While studying at Chapman University, Jeff won awards for classical guitar and visual storytelling before graduating with a BFA in Film. As the front man of his rock band, 7k, Garvin released three albums and toured the United States. When the band dissolved in 2011, Jeff, who had always written short stories and lyrics, found his passion in full-length fiction.

His debut novel, Symptoms Of Being Human, tells the story of Riley, a 16-year-old gender fluid teen who starts an anonymous blog to deal with hostility from classmates and tension at home. But when the blog goes viral, a storm of media attention threatens Riley’s anonymity. Coming February 2, 2016 from Balzer + Bray/HarperCollins.

Jeff lives in Southern California with his music teacher wife, their menagerie, and a respectable collection of books and guitars. 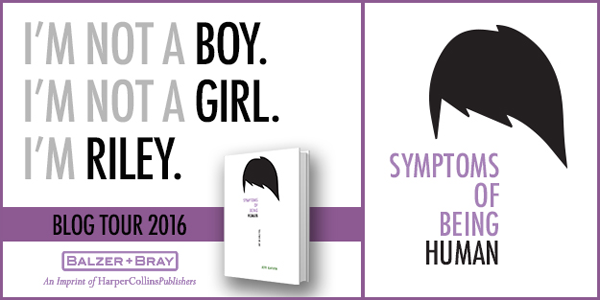 An excerpt from Symptoms Of Being Human by Jeff Garvin

The first thing you’re going to want to know about me is: Am I a boy, or am I a girl?

I stop typing and stare at the cursor, which flashes at me incessantly, as if mocking my inability to write one stupid post.

“Riley!” It’s my mom, calling me from downstairs in her singsongy voice. “If you still want to be early, you’d better come down for breakfast!”

I glance at the clock. I’m not really running that late — but I want to get the lay of the land while the campus is still mostly empty. “I’ll be down in a minute!” I say, then click Delete, slam my laptop shut, and slide off my bed.

At least I can tell Doctor Ann I tried.

I stop in front of the mirror to examine myself. I don’t know if this look will help me blend in at my new school, but it definitely exudes a sort of existential punk vibe, like, “I care so much, I don’t care,” that feels distinctly me. As a last touch, I mash down my bangs so they hide as much of my face as possible. It’ll have to do.

Downstairs, my mother gives me a wide smile. “First day!” she says.

I manage to smile in return, and then I grab a box of cereal from the pantry and sit down at the table across from my dad.

“Ready to conquer Park Hills High?” he says. Then he looks up from his tablet, and his smile wilts when he notices my outfit.

I’m wearing a pair of jeans and my dad’s old Ramones T-shirt, which I’ve modified to fit my smaller frame. Black Doc Martens — synthetic ones, no cows were harmed in the making of my shoes — round out the ensemble. I’m grateful that I don’t have to wear a uniform anymore — I remember how suffocating it was to be confined to the same identity day after day, regardless of how I felt inside.

But the truth is, it still doesn’t matter how I feel — because however I show up today, people will expect me to look the same tomorrow. Including my parents.

So my only choice is to go neutral.

“Is that my Ramones shirt?” Dad says.

He clears his throat. “Riley, are you sure that’s how you want to present yourself on your first day?”

I open my mouth, then close it without saying anything.

Dad gestures at me with his grapefruit spoon. “You only get one chance at a first impression.”

I want to scream: Like I don’t know that! But instead, I say, “I guess I’m hedging my bets. I want to see how the kids dress at public school. Don’t want to overdo it and end up looking stupid.” Dad seems to consider, then nods his head approvingly. By appealing to his sense of strategy, I’ve averted the Inquisition.

Ten minutes later, the three of us pile into Mom’s minivan. I’ve agreed to let both parents escort me on my first day, but only on the condition that we not take the black Lincoln. I don’t want anyone to see Dad’s government license plates and connect Riley Cavanaugh with Congressman Cavanaugh. Maybe I’m being paranoid, but that kind of notoriety is the last thing I need on top of…well, on top of everything else.

We turn out of our gated community and onto Imperial Highway. The closer we get to the school, the more butterflies flap around in my stomach; I don’t know what to expect. At Immaculate Heart, it was impossible for someone like me to avoid being singled out; the school was just too small and too conservative. Maybe the people here will be more open-minded. Or, at the very least, maybe I’ll be able to blend in.

“Mom, we talked about the ‘honey’ thing.”

“You mean you want to make an entrance,” Dad says, a smile turning up one corner of his mouth.  I blink at him. He couldn’t misunderstand me more if he actively tried. But if believing that will keep him from making a scene out of my arrival, I’ll fake it.

Mom glances at me in the rearview, her eyes narrowed, and I get the feeling she sees through my lie. She starts to say something, then seems to change her mind and just presses her lips together instead. Dad pulls to the curb and turns to face me.

“You’re smart and resourceful, Riley,” he says. “Put yourself out there, and you’ll be an asset to this campus.”

As they pull away, Mom gives me an ironic princess wave, and Dad makes devil horns with one hand. I roll my eyes, wait impatiently for the van to turn the corner, and then look around to get my bearings.

I’m about fifty yards from the school entrance, where a few clusters of students are beginning to form. I let out a long, slow breath and start toward the gates.

A green SUV pulls into the circular drive, and a blond girl in a short skirt climbs out. As she approaches her friends, she walks past a circle of guys passing around a basketball. One of them wolf-whistles at her, and she gives him the finger.

Then it’s my turn to walk past them. My heart beats faster as I get close; I keep my head down and try to blend in with the concrete. To my relief, no one says anything to me; I’ve dodged the first bullet.

I’m only a few yards away from the big green gates now. All I have to do is make it past the group of girls, and then I’ll be on campus, where I can disappear into a crowd.

But as I draw closer, two of the girls look up and notice me. I glance away, but I feel their eyes on me, scrutinizing, categorizing. I’ve been through this before, and it shouldn’t get to me — but today, it does. My skin breaks out in goose bumps, and I wrap my arms around myself and walk faster.

“Oh my God,” one of the girls says, and my head involuntarily turns to look at her. She’s got long brunette hair and a small, perfect nose. “Holy shit, you guys.” She lowers her voice to a stage whisper, but I can still hear what she says:

A fit of giggles erupts from the group around her. My face goes hot. I walk faster, trying to escape the whispers.

“Yeah, but look what it’s wearing.”

It. She called me it. 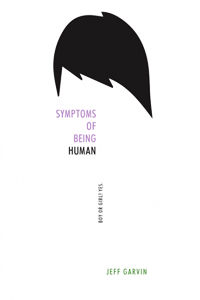 The first thing you’re going to want to know about me is: Am I a boy, or am I a girl?

Riley Cavanaugh is many things: Punk rock. Snarky. Rebellious. And gender fluid. Some days Riley identifies as a boy, and others as a girl. The thing is…Riley isn’t exactly out yet. And between starting a new school and having a congressman father running for reelection in uber-conservative Orange County, the pressure — media and otherwise — is building up in Riley’s so-called “normal” life.

On the advice of a therapist, Riley starts an anonymous blog to vent those pent-up feelings and tell the truth of what it’s REALLY like to be a gender-fluid teenager. But just as Riley’s starting to settle in at school — even developing feelings for a mysterious outcast — the blog goes viral, and an unnamed commenter discovers Riley’s real identity, threatening exposure. Riley must make a choice: walk away from what the blog has created — a lifeline, new friends, a cause to believe in — or stand up, come out, and risk everything.

Don’t forget to visit the other stops on the Symptoms Of Being Human for reviews, interviews, and much, much more!