Book Review: Things Jolie Needs To Do Before She Bites It by Kerry Winfrey 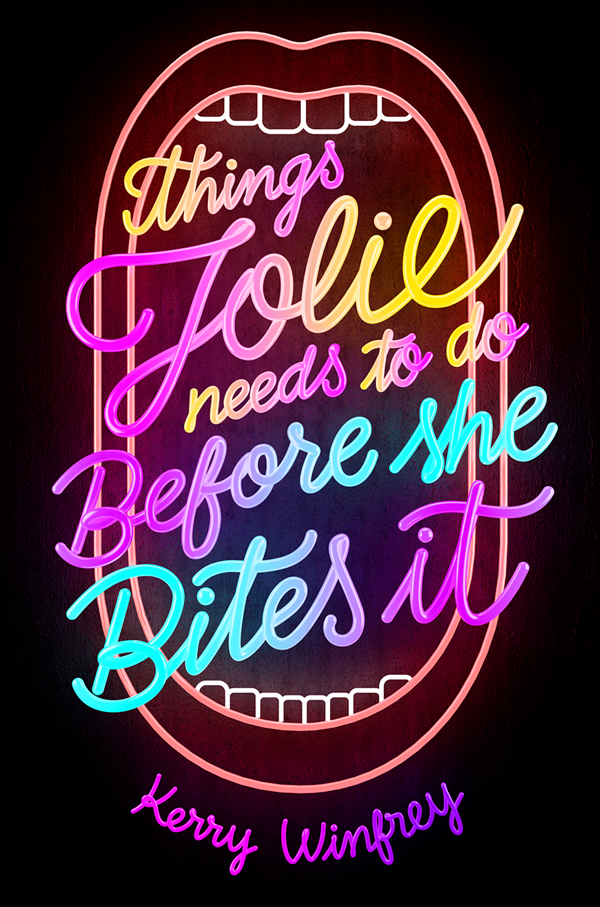 Jolie’s a lot of things, but she knows that pretty isn’t one of them.

She has mandibular prognathism, which is the medical term for underbite. Chewing is a pain, headaches are a common occurrence, and she’s never been kissed. She’s months out from having a procedure to correct her underbite, and she cannot wait to be fixed.

Jolie becomes paralyzed with the fear that she could die under the knife. She and her best friends, Evelyn and Derek, decide to make a “Things Jolie Needs to Do Before She Bites It (Which Is Super Unlikely, but Still, It Could Happen)” list. Things like: eat every appetizer on the Applebee’s menu and kiss her crush Noah Reed.

But since when did everything ever go exactly to plan?

Filled with humor, heart – and an honest look at today’s beauty standards – Jolie’s journey is a true feel-good story.

“I think about the things I spent my whole life avoiding, the time I spent hiding, the moments when I tried to make myself small and invisible. If only I’d known that this was on the other side of my fear, that all I had to do was let people see me.”

Sixteen-year-old Jolie Peterson has spent her entire life attempting to hide in plain sight. Born with mandibular prognathism (an underbite), Jolie has always felt insecure about how she looks, especially when compared to her beautiful sister, Abbi, and does everything possible to draw attention away from her painful and often difficult condition. Jolie has always dreamed of how her life would be different after the surgery intended to correct her underbite (a surgery which is scheduled for her seventeenth birthday) and creates a list of things she would most like to accomplish post-procedure. But when Jolie begins to grow concerned about dying during the operation (a fear likely worsened by her family’s obsession with ‘Worst-Case Scenario TV’), Jolie decides to make a second list comprised of the things she feels she absolutely must do before her surgery, just in case. Along with the help of her friends, Evelyn and Derek, Jolie creates the “Things Jolie Needs To Do Before She Bites It (Which Is Super Unlikely, But Still, It Could Happen)” list complete with goals like “Read Jane Eyre”, “Eat all the appetizers at Applebee’s” and “Kiss Noah Reed”, her crush. In the process, Jolie will learn that to make the most of today, sometimes you have to live like there’s no tomorrow. Things Jolie Needs To Do Before She Bites It is a quiet, understated story that nonetheless speaks volumes about self-esteem, body image, beauty standards, feminism and the rewards of stepping outside of one’s comfort zone.

The possibility of dying during her operation, however remote, finally gives Jolie the incentive she needs to be more proactive about many of the things she has always longed to do, but was always too scared to pursue. Despite her newfound sense of determination, however, Jolie’s objective to complete her pre-surgery goals is anything but easy or straightforward. Because so much of her self-esteem (or lack thereof) is connected to how she feels about her physical appearance, Jolie is incredibly insecure and finds it difficult to feel worthy of being heard, celebrated, and even loved. It is this journey of self-acceptance that lies of the heart of this novel, a journey which I have no doubt readers of all ages will find familiar and deeply relatable. Jolie also struggles with the implications of her forthcoming surgery and whether moving forward with it is the right choice for her. While there are practical, medical reasons why the surgery is important, as it’s meant to prevent further difficultly as she grows older, including jaw pain, speech difficulty and headaches, because the surgery will also make her more conventionally attractive, Jolie begins to worry that this, coupled with her excitement and anticipation about being ‘fixed’, makes her less of a feminist. Much of the novel is spent interrogating traditional beauty standards and what it truly means to be beautiful, ultimately resulting in the empowering conclusion that beauty is entirely subjective and not solely reliant on physical attributes.

In addition to its positive and empowering message, Things Jolie Needs To Do Before She Bites It is also interspersed with a number of charming ancillary details including Derek’s podcast, “Deep Dive”, which offers an in-depth examination of obscure subject matter, Derek and Jolie’s shared love of terrible films, and “To The Moon and Back”, the school play in which Jolie eventually stars in order to get closer to her crush, Noah, and which is notable both for its inclusion of space travel and a perplexing choir of singing pigs. (As an aside, I would pay an alarming amount of money to see this play performed in full.) Jolie has a healthy, positive relationship with her parents and is able to communicate openly and honestly with them about her fears and insecurities, and her friendship with Evelyn and Derek is both supportive and kind.

Kerry Winfrey’s 2015 young adult debut, Love and Other Alien Experiences, about an housebound teen who is forced to confront her anxiety and agoraphobia when she is unexpectedly nominated for homecoming queen, is a book that’s very dear to my heart and one I consider woefully under-appreciated so I was eager to read the author’s 2018 sophomore novel, Things Jolie Needs to Do Before She Bites It. As was the case with Winfrey’s debut, Jolie’s story is earnest, sweet, endlessly enchanting and one I won’t hesitate to recommend to absolutely everyone I know. A novel filled with a generous helping of heart, humour and hope, Things Jolie Needs To Do Before She Bites It is both a delightful romantic comedy and a touching story of a girl learning to love herself unreservedly.