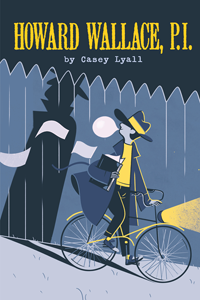 Twelve-year-old Howard Wallace lives by his list of rules of private investigation. He knows more than anyone how to work with what he’s got: a bathrobe for a trench coat, a makeshift office behind the school equipment shed, and not much else — least of all, friends. So when a hot case of blackmail lands on his desk, he’s ready to take it on himself…until the new kid, Ivy Mason, convinces him to take her on as a junior partner. As they banter through stakeouts and narrow down their list of suspects, Howard starts to wonder if having Ivy as a sidekick — and a friend — is such a bad thing after all.

She didn’t knock, just barged through the door like she owned the place. She did own it, but that was beside the point. I knew my rights, and privacy was at the top of the list. Planting herself in the middle of the room, she scowled as her eyes swept across the floor. Dirty cups and rogue pieces of laundry were noted and filed away on her mental list of grievances. With a hand clamped over her nose, she turned to me. “Howard, how many times do I have to ask you to clean your room?”
I told her to scram; a man’s room is his castle.
Some mornings I should just keep my mouth shut.

Move over, Sam Spade. There’s a new detective in town! Meet twelve-year-old Howard Wallace, middle grade gumshoe and head of Wallace Investigations, the organization trusted with solving all of Grantleyville’s greatest mysteries including cat capers, lovelorn locker looters and missing musical instruments. None of these can prepare Howard for his most challenging case yet, however, when the student council chequebook is stolen and the treasurer is being blackmailed into resigning, lest the pre-signed cheques be used. Along with the help of his trusty, anthropomorphized bike, Big Blue, and the persistent – and often persnickety – new girl and Wallace Investigation’s (temporary) junior detective, Ivy Masen, Howard will have to navigate a labyrinth of clues, suspects, stakeouts, informants and interrogations if he’s going to return the money to its rightful owner and bring the culprit to justice before it’s too late.

Ivy sensed she was losing her audience and pulled a piece of paper from her pocket. “I brought my resume.”
This should be good. I skimmed through the sheet she handed over. “Your hobbies are reading, spying, and skulking?”
“And baking.”
“You’ve listed Sherlock Holmes as a reference.” I didn’t know whether to laugh or cry.

Stories like Howard Wallace, P.I. are the reason I continue to read middle grade fiction well into adulthood. In her incredibly impressive debut novel, Casey Lyall brings detective fiction to life through the eyes of a thoroughly loveable twelve-year-old boy determined to walk in the footsteps of his hallowed Holmesian heroes. In doing so, the author perfectly captures the language, tropes, and beats of the noir genre while simultaneously crafting a unique story all her own. One needn’t be in possession of their very own magnifying glass and trench coat to deduce that Howard Wallace, P.I. is one of the best middle grade novels published in this or any other year and Lyall one of the most promising new voices writing for this age group today. It’s elementary, my dear Watson.

“What’s with the getup? Is that the company uniform or something?”
“What getup?”
She got a pained look and waved her fingers in the general direction of my lucky coat. I looked down and held out the sides.
“This? All P.I.s wear a trench coat.”
“Dude, that’s a brown bathrobe.”
I shrugged and straightened out my sleeves. “First rule of private investigation, Ivy: Work with what you’ve got.”

Smart, enthusiastic, resourceful and determined, Howard Wallace is a character with the attitude of Sam Spade, the instincts of Philip Marlowe, and the tender heart of twelve-year-old boy who is sure to charm readers of all ages. Howard’s intense vulnerability and innocence, coupled with the hard-boiled exterior under which these are carefully hidden, provide a delightful study in contrasts as Lyall delves deeply into the life of her protagonist and his motivations. Rejected and ridiculed by his classmates and misunderstood by many of his well-intentioned but clueless elders, Howard uses his work as a private detective as a safe space into which he’s able to retreat. Despite the various hardships Howard faces, however, his spirits are never down for long as the author uses the character’s dry wit and amusing asides to the audience (“I wondered if Sam Spade got this much grief from his family.”) to underline his resilience and sense of humour, even in the most difficult of situations. Ivy Masen, Howard’s second-in-command and (temporary) junior detective at Wallace Investigations is equally irresistible. Bold, brassy, inquisitive and tenacious, Ivy is fifty percent hair, fifty percent freckles and one hundred percent attitude as she refuses to take ‘no’ for an answer when Howard is reluctant to accept her assistance in his latest case. Readers will quickly learn that there is a great deal more to Ivy than initially meets the eye as the two characters come to see they have more in common than they would have initially imagined possible. Together, Howard and Ivy are able to find a sense of purpose, acceptance and accomplishment they have otherwise lacked, both in their work, as well as in each other.

“I warned you once. I don’t like repeating myself. Quit the Reddy case,” she read. “Or else.” She handed it back to me. “Again, very vague.”
“Yes,” I agreed. “But it means we’re doing something right.”
“Oh, really?”
“Yup,” I said. “I’ve never been threatened and vandalized before.” I grinned at Ivy. “I must be getting good.”

Effortlessly evoking the likes of The Maltese Falcon and The Big Sleep, Howard Wallace, P.I. would act as a brilliant introduction to noir fiction for the uninitiated as Lyall masterfully employs the unique language, style, rhythm, and tropes synonymous with this genre. Though the detective’s ever-present trench coat and cigarettes have been re-imagined as a bathrobe and bubble gum, respectively, absolutely nothing is lost in translation as the author delights in playing with genre conventions and re-defining noir fiction for a new generation. Younger readers will have a fantastic time putting the pieces of the puzzle together and solving the case alongside Howard as the novel provides a wonderful opportunity to think critically and actively engage with the text. It isn’t all clues, capers and criminals, however. With universal truths about growing up, fitting in, and standing up for what you believe in, Howard Wallace, P.I. is as valuable for its thoughtful examination of contemporary issues particularly relevant for younger readers as it is for the captivating and engaging mystery it provides.

“Detective work is your life. You love it. I love it.” A small worry line creased her forehead. “If we don’t fight for that, when is anything going to be worth fighting for?”
I let her words sink in, and the terrifying truth of them hit the center of the black ball of fear in my gut. Nothing had ever fit me as well as being a detective did. I’d been deceiving myself about how easy it would be to let it go. Ivy was right. If you don’t fight when you have everything to lose, what you have isn’t worth keeping.
For once, I finally had something worth keeping.

I can say with absolute certainty that Howard Wallace, P.I. will continue to live on in my heart and mind for years to come, and I’m so excited that Casey Lyall’s irresistible debut marks what will (hopefully) be the first of many adventures with these thoroughly loveable characters. Clever, creative, charming, and laugh-out-loud hilarious, as a famous detective once rhapsodized, Howard Wallace, P.I. truly is the stuff that dreams are made of.

● Steve @ Mr. Steve’s Middle Grade Reviews wrote “This is the perfect light-hearted mystery with characters to root for and root against – with a few surprises thrown in!” (Read the rest of the review Here!)

● Publisher’s Weekly wrote “Engagingly blending the fictional world of dames and private eyes with keen insights about adolescent friendship, Lyall’s debut is a winner.” (Read the rest of the review Here!)