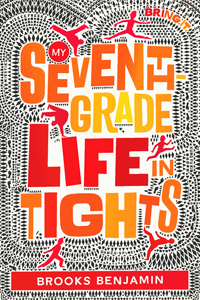 All Dillon wants is to be a real dancer. And if he wins a summer scholarship at Dance-Splosion, he’s on his way. The problem? His dad wants him to play football. And Dillon’s freestyle crew, the Dizzee Freekz, says that dance studios are for sellouts. His friends want Dillon to kill it at the audition — so he can turn around and tell the studio just how wrong their rules and creativity-strangling ways are.

At first, Dillon’s willing to go along with his crew’s plan, even convincing one of the snobbiest girls at school to work with him on his technique. But as Dillon’s dancing improves, he wonders: what if studios aren’t the enemy? And what if he actually has a shot at winning the scholarship?

Dillon’s life is about to get crazy…on and off the dance floor in this kid-friendly humorous debut by Brooks Benjamin.

My crew was my family. But they didn’t understand what it was like for me. The more we danced together, the more I felt like I didn’t belong. Kassie and Carson had chosen to leave their studios. I’d never even set foot in one.
I was the outsider in a group of outsiders.

A real dancer. That’s what twelve-year-old Dillon Parker longs to be most, a feeling that only intensifies every time he admires the clean lines and practiced moves of his fellow dancers and friends, Kassie and Carson. So, when Dillon learns that Dance-Splosion, the largest dance studio in all of East Tennessee, is offering a three-week summer scholarship in June to one lucky dancer, he is quick to make an audition tape. The only problem? Kassie and Carson see dance studios as ‘sellouts’ that diminish the pure expression and art of dance and their crew, Dizzee Freekz, has only one motto: “The crew comes first”. Dillon knows Kassie and Carson won’t approve of his desire to be classically trained and when his audition video goes viral, is sure they’ll be furious. As it turns out, however, they’re anything but. Excited about the prospect of “getting behind enemy lines”, Kassie and Carson devise a plan to have Dillon – with the unwitting help of resident Queen Bee and Dance-Spolosion’s brightest star, Sarah Middleton – win the scholarship only to publicly humiliate the studio by refusing to accept it during the Heartland Dance Challenge ceremony. As his lessons with Sarah begin in earnest and the scholarship seems well within reach, however, Dillon will be forced to reconcile his growing desire for traditional training with his conflicted loyalties to his friends and family who believe he should be pursuing anything but.

Sure, the entire school was probably at home sharing the video of my underwear, putting it to different music tracks, adding in a whole library of gross sound effects for the big reveal at the end.
But they were watching the old Dillion Parker.
The one who was dancing without any hope of ever getting better.
I was the new and improved Dillon Parker.
The one who had just gotten permission to get some actual help from a destined-to-be-professional dancer.

There are few stories that bring me more joy than those that allow a character to embrace and celebrate their passions. Identifying what makes us most happy – and living a life that allows us to honour that – is one of the most important and gratifying things we can hope to do in our lives. Brooks Benjamin’s charming, clever and warm-hearted debut follows one boy’s valiant quest to do just that, exploring valuable truths about creativity, self-expression and standing up for who you are and what you believe in. My Seventh-Grade Life In Tights is an uplifting, empowering story that encourages young readers to dance like no-one is watching and to be proud to move to the rhythm of their own, unique song.

I could walk away from this whole thing with an entire arsenal of new moves. Improved techniques. Maybe even an actual dance style. My moment of last-day-of-summer treachery had just unlocked a door for me. One that might be able to slingshot me to the top of any choreographer’s list.
There was too much excitement puling through my veins for me to sit down. I hopped up out of my chair, pacing back and forth. My eyes were locked on Sarah.
Come to me, Tighty Whitey, she was saying. Let me help you become a real dancer.
Yup. That door was unlocking.
And I was about to ninja-kick the thing down.

At its core, My Seventh-Grade Life In Tights centers around the pursuit of one’s passions. Nowhere is this more evident than in the case of the novel’s protagonist, twelve-year-old Dillon Parker. Brimming with infectious enthusiasm, earnest sincerity and a genuine desire to forge his own path, Dillion is faced with a number of monumental choices over the course of the novel. Many of these choices are neither inherently ‘good’ or ‘bad’, ‘right’ or ‘wrong’. They merely are, and it is up to Dillon to determine which are best for him – even if it means making (and making up for) a few mistakes along the way. The author also explores the notion of logical fallacies, encouraging young readers to challenge information or opinions otherwise presented as absolutes. Should Dillon pursue dance or football? Classical training or improvised movement? Many of these paths are not mutually exclusive and Dillon’s journey demonstrates that it is not merely the consumption and collection of knowledge, but a careful and considered interpretation of such, that allow for the greatest success. It is this debate – instruction vs. instinct and appearance vs. authenticity – that act as the basis for all that follows. The author trusts young readers to draw their own conclusions as Benjamin uses Dillon’s journey to impart valuable lessons about creative expression and remaining true to oneself without ever appearing condescending or sanctimonious. Whatever the outcome, Dillon’s intense vulnerability and self-deprecating humour are sure to capture readers’ imaginations, as well as their hearts.

When I’d fallen into this whole mess, I’d know exactly what I wanted. To get some dance help and sneak back out before things got complicated.
But now?
Seeing the big “What if?” staring back at me? Seeing real dancers in a real studio churning out moves that I only dreamed of doing?
I wasn’t so sure anymore.

In his authorial debut, Brooks Benjamin makes a concerted effort to dispel a number of harmful stereotypes, particularly those relating to sexual and gender-based discrimination. In doing so, the author creates a diverse and inclusive environment in which his characters are celebrated not in spite of their differences, but because of them. When Dillion’s father expresses concern about Dillion pursuing dance as a hobby (“Boys who dance get called a lot of things, Dillion. I don’t want you to have to go through that.”), Dillion is understandably baffled. After all, why would anyone pick on him for enjoying something as simple and innocent as dancing? Surely the most dangerous thing about dance is Dillon’s tendency to trip over anything – and everything – in sight, right? In including these and other conversations, Benjamin expertly exposes the senseless, arbitrary nature of rigid gender binaries and how this learned behaviour is as insidious and pervasive as it is destructive. In a story that encourages young readers to be unafraid to strike a pose and find the right moves for them, Benjamin creates a world that contains evidence of racial, sexual and financial diversity, including the addition of an absolutely charming homosexual romance between Dillon’s friend, Carson, and another of the novel’s male, secondary characters. On a purely stylistic level, My Seventh-Grade Life In Tights is also a success. The author’s narrative style is pitch-perfect for the middle grade audience for whom the novel is intended, beautifully capturing the humour and cadence of dialogue for this age group. It can often be difficult for authors to capture the ineffable magic of the arts in writing (the stroke of a brush against canvas, the tenor of a song sung with passion, the defiance of gravity in a truly spectacular grand jeté) but Benjamin does so beautifully. Each of the dance routines are detailed in descriptive, evocative language – including one pants-splitting routine that Dillon would likely rather soon forget!

It was time to finish this thing. Time to step up and do what it was going to take to finally become a real dancer.
And there was only one way to do that.
I had to strut onto that stage wearing a pair of tights and dance like I’d never danced before.

You can’t handle the awesome! As the Dizzee Freekz’s Youtube channel proudly declares, My Seventh-Grade Life In Tights is filled to the brim with passion, pizzazz, and pure, unadulterated awesome. Funny, heartfelt, and introspective in all the right places, Brooks Benjamin’s middle grade debut is sure to inspire a Dance Dance Revolution and have even the most rhythmically-challenged readers of all ages reaching for their very own pair of tights.

● Bee @ Quite The Novel Idea wrote “My Seventh-Grade Life In Tights was everything I hoped it would be and more.” (Read the rest of the review Here!)

● Amanda @ Teen Librarian Toolbox wrote “Excellent dialogue, fast pacing, and lots of humor — this book has all the right moves.” (Read the rest of the review Here!)

● Jess @ The Reading Nook Reviews wrote “My Seventh-Grade Life In Tights is a delightful look at passions and hopes, all set against a dance backdrop. Highly, highly recommend.” (Read the rest of the review Here!)