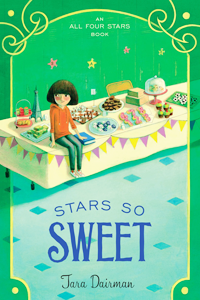 Summer is winding down, and Gladys Gatsby’s stomach is full of butterflies about starting middle school. But her concerns go beyond juggling schoolwork and losing touch with old friends; she also has to worry about looming deadlines from her undercover job as the New York Standard’s youngest restaurant critic.

When her editor pushes for a face-to-face meeting, Gladys knows she must finally come clean to the grown-ups in her life about her job. Her perfectly planned reveal is put on hold, though, when her parents arrive home with a surprise: Gladys’s aunt Lydia — one of the only adults who knows her secret — fresh off a plane from Paris. Gladys and Aunt Lydia try one last ruse to fool her editor at the Standard, but for how long will Gladys be able to balance the drama of middle school with her secret life?

This third book in the delicious All Four Stars series sees Gladys facing her biggest challenge yet: being true to herself and honest with her friends and family, regardless of what those around her think.

She was trying to help her friends see the bright side – but at the same time, the pit of worry that had entered her stomach in the schoolyard now felt like it was sprouting into a full-grown tree of anxiety. Two classes with Charissa and none with Parm left a whole lot of classes with zero friends. Her parents would surely advise her to make new ones, but Gladys would rather tackle a hundred difficult new recipes than force herself to talk to one new person.

Goodbye, East Dumpsford Elementary. Hello, Dumpsford Township Middle School! As summer comes to a close and culinary wunderkind Gladys Gatsby prepares for the first day of seventh grade, a new school will soon be the least of her worries as Gladys contends with new clubs, new commitments, new friends (and enemies), new rules and new beginnings. With her plate increasingly full and her status as the New York Standard‘s preeminent restaurant critic still a carefully-guarded secret, Gladys will have to work harder than ever before as she faces her most difficult challenges yet.

…She couldn’t help but think back to the way her classmates (mostly girls) used to make fun of her love of arugula. And that was just a salad green! Now Sandy actually wanted to have a reputation at his school for eating gross foods?
Boys were weird.

Reading Tara Dairman’s Stars So Sweet, the third and final instalment in the author’s throughly enchanting All Four Stars middle grade series, was an incredibly bittersweet experience. For the last three years, a new release from Dairman has been one of the highlights of my summer, and while I was eager to embark on another adventure with Gladys Gatsby, I couldn’t help but grow sad that this novel would mark our final journey together. That said, as things heat up in and out of the kitchen, I can think of no better way to bid adieu to this scrumptious series than Stars So Sweet, a tasty morsel that’s good to the last bite and proves to be the author’s sweetest book yet.

Gladys sighed. It was great to have her talents appreciated, especially since it was a feeling she didn’t always get at home. But it didn’t feel so great to know Fiona’s admiration was still based on a big deception. If Fiona knew how truly unique Gladys’ voice was, would she still be so interested in having her at the paper full-time?

Over-committed and under a great deal of pressure, the stakes have never been higher for Gladys Gatsby as she is forced to juggle academic, personal and professional considerations. Faced with the prospect of a new assignment and a potential promotion, Gladys’ unintentional deception and secret double life culminate in a taut, exciting adventure that will leave readers on the edge of their seat until the very last page. What will happen when Gladys tells her editor – and her parents! – the truth? Will her dreams be over before they ever truly begun? Only time will tell as Gladys is forced to use every ounce of her courage, creativity and tenacity to determine what the future holds. It is not what challenges Gladys faces, however, but how she faces them that truly define her. Even when she feels as though “a live fish was flopping around in her stomach” or “like a single chocolate chip drowning in a huge bowl of cookie batter”, Gladys never fails to meet each and every challenge head-on with careful, measured judgement and a little extra help and advice from her friends.

“Seeing your goals is the first step. But reaching them often requires taking many more.” She approached Gladys’ desk again. “The good news is that you don’t need to see the entire path clearly to set out on it; you just need to see a few feet ahead of you.”

Stars So Sweet also sees the return of some of the series’ most familiar and beloved secondary characters including Parm Singh, Sandy Anderson, Charissa Bentley, Fiona Inglethorpe, and everyone’s favourite literary prodigy and author of the best-selling novel, Zombietown, U.S.A., Hamilton Herbertson. One of the things readers can appreciate most about Dairman’s supporting cast is that each feels like the main character in their own right, with feelings, aspirations and desires independent of that of the protagonist. In Stars So Sweet, Sandy’s busy working on cementing his legacy as the Gross-Out King and “The Boy Who’ll Eat Anything” at St. Joseph’s Academy, Parm is struggling to raise enough money to allow the girls’ soccer team to attend the regional tournament in Pennsylvania, Charissa is attempting to balance one too many extracurricular activities and Hamilton is trying his best to live a more normal life. Perhaps best of all, much to my surprise and delight Stars So Sweet also includes LGBTQ content as Dairman explores how one of the secondary characters has a crush on another character of the same sex. This revelation is handled with a great deal of thought and sensitivity, and creates a wonderful opportunity for young readers to speak with their parents about the importance of inclusivity, diversity and the beauty of love in any form.

She had spent the afternoon at Rolanda’s house working on the mask cookies with the Drama Club. Several of the other members actually had baking experience, which should have made the undertaking go more smoothly – and it did for a while, until everyone started belting out show tunes from Phantom Of The Opera. Gladys left the house with both a splitting headache and an intense desire to send the chandelier in Rolanda’s dining room crashing down on every screeching, warbling Andrew Lloyd Webber fan there.

Over the course of the All Four Stars trilogy, Tara Dairman has fostered a greater awareness of and appreciation for the role food plays in our lives, encouraging young readers to be unafraid to expand their palate and be more adventuresome in their culinary choices. From exploring the intricacies of Salvadoran, Cuban and Peruvian cuisine to unusual dried meat delicacies like emu, camel, yak, kangaroo and alligator, Stars So Sweet continues this tradition, managing to both entertain and educate as Gladys is exposed to a wide variety of foodstuffs from around the world. As was the case with the previous instalments in the series, however, readers should be warned against devouring Stars So Sweet on an empty stomach as from grilled swordfish dressed with tomato and saffron coulis to rosewater flan, the author’s descriptions of the delectable dishes Gladys encounters on her adventures are as vivid and as mouthwatering as ever. Sparkling dialogue, clever chapter titles (“Lobster Lockdown”, “In Hot Water”, “Pie In The Sky”, “A Sour Note”) and creative twists on ubiquitous icons like Hell’s Kitchen and Shakespeare’s Macbeth ensure that the overall narrative voice is as charming, effervescent and fun as ever. Most importantly, Dairman never condescends to her audience, instead trusting them to pick up on the subtleties of the text, particularly the valuable lessons about honestly, responsibility and diversity Stars So Sweet so delicately touches upon.

What can I possibly say about this wonderful, wondrous series that I haven’t said already? Stars So Sweet and its predecessors deserve all four stars and then some as Tara Dairman proves once and for all that there is no age limit on a truly exceptional story. Whether you’re young or young at heart, readers of all ages will be able to delight in the hijinks and hilarity of the adventures of Gladys Gatsby as she takes on everything from bake sales and middle school dances to journalistic integrity and entrepreneurial enterprises. In Gladys, accomplished middle grade author Tara Dairman has crafted a character as timeless, as delightful, and as loveable as any created for this (or any other) age group, and one that can stand proudly shoulder-to-shoulder with the Harriet M. Welschs and Sara Crewes of the world. Three cheers for Gladys Gatsby!

● Lucy @ The Reading Date wrote “The final course of this delicious trilogy brings Gladys’ story to a satisfying conclusion.” (Read the rest of the review Here!)

● Karen @ For What It’s Worth wrote “I’m so sad to see her go but also happy she went out on a high note. The perfect end to the perfect series!” (Read the rest of the review Here!)

● Aeicha @ Word Spelunking wrote “Stars So Sweet is a fun, heartfelt, and delightful addition to a wonderful series young readers will just gobble up!” (Read the rest of the review Here!) 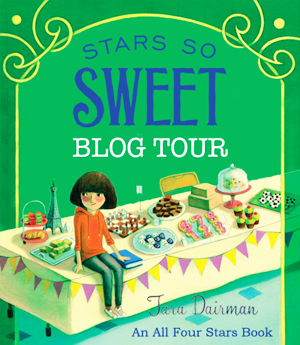 Don’t forget to visit all the wonderful stops along Stars So Sweet blog tour for a variety of reviews, recipes, and much, much more!