Review: The Girl Who Fell by Shannon M. Parker 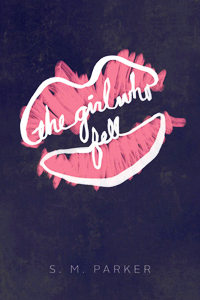 His obsession.
Her fall.

In this dark kissing book, high school senior Zephyr Doyle is swept off her feet — and into an intense relationship — by the new boy in school.

Zephyr is focused. Focused on leading her team to the field hockey state championship and leaving her small town for her dream school, Boston College.

But love has a way of changing things.

Enter the new boy in school: the hockey team’s starting goaltender, Alec. He’s cute, charming, and most important, Alec doesn’t judge Zephyr. He understands her fears and insecurities — he even shares them. Soon, their relationship becomes something bigger than Zephyr, something she can’t control, something she doesn’t want to control.

Zephyr swears it must be love. Because love is powerful, and overwhelming, and…terrifying?

So when Zephyr finally begins to see Alec for who he really is, she knows it’s time to take back control of her life.

If she waits any longer, it may be too late.

My love for him is a deep blue love. So blue it is black. Like an ocean under the ocean. The beginning and the end.

High school senior Zephyr Doyle had things all figured out. Namely, to help lead her field hockey team to victory and spend as much time as she can with her best friends, Lizzie and Gregg “The Slice” Slicer, before fulfilling her lifelong dream of attending Boston College and pursuing a career in marine biology in the fall. No deviations. No distractions. So, when Zephyr meets the handsome and enigmatic Alec Lord, a recent transfer student with a scandalous reputation, he seems like little more than an unwanted complication. After a few chance meetings, whispered confidences, and a shared history of parental dysfunction and insecurities, however, Alec begins to work his way into Zephyr’s life, as well as her heart. Soon, the two are inseparable. Suddenly, caught up in the thrill and exultation of her first love, the things that were once so important to Zephyr – Lizzie, Gregg, field hockey, and even Boston College – don’t seem to matter much anymore. But as their connection continues to deepen and love turns to obsession, Zephyr will learn that things – and people – are not always what they seem. Not every love story has a happy ending.

Lying on my bed, my brain cyclones with thoughts of men and boys and boys and men. All making the wrong choices.

February is Teen Dating Violence Awareness Month and I can think of no better way to honour this important occasion than to discuss a novel that deals with the topic with as much insight, subtlety and compassion as Shannon M. Parker’s 2016 contemporary debut, The Girl Who Fell. According to Love Is Respect, “one in three teens in the U.S. will experience physical, sexual or emotional abuse by someone they are in a relationship with before they become adults.” It is for this (and many other) reasons that novels like The Girl Who Fell are so vital and important. At turns haunting and unsettling, at others provocative and pulse-pounding, Shannon M. Parker’s debut is a powerful testament to the ability of fiction to create our reality and shape our perspective in a novel about love, lies, and blurred lines.

His chest hovers over mine, our hearts building a staccato rhythm. And when he fills my mouth with his kiss, I want our heartbeats to sync. I want to forever be connected to this person. All at once he feels like my now, my future, my everything.

Zephyr Doyle’s life is that of one in transition as she struggles with the formidable prospect of entering the next phase of her life without knowing precisely what that might entail. Intelligent and driven, Zephyr is a girl who, despite a wealth of skills and accomplishments, is left emotionally devastated and insecure after her father’s sudden abandonment four months prior to the beginning of the novel. His disappearance (and the ill-thought out note he left behind) leave Zephyr all too vulnerable to Alec’s careful machinations and it isn’t long before she is careening headfirst into her first love without the objectivity to recognize how deep and dark the cave into which this maelstrom of emotion has thrust her. Despite this, however, Shannon M. Parker makes it all too easy to understand how Zephyr found herself in her present situation. The Girl Who Fell speaks volumes about the author’s mastery of the craft as Parker is able to accomplish this as adeptly as she does, transforming Zephyr into a sympathetic and accessible character in a role that might otherwise have proven grating or superficial under the direction of a less capable author. The reader is predisposed to dislike Alec, knowing the eventual, inevitable trajectory of their relationship. And yet. There is something undeniably seductive, even sexy, about Alec’s pursuit of Zephyr and the way in which he draws her in, as the author does the reader. The protagonist’s story is beautifully enhanced by that of the characters around her, as Shannon M. Parker seamlessly weaves these seemingly disparate elements into a cohesive narrative, touching upon the themes of transition, empathy and forgiveness that underscore the entirety of the novel. Zephyr’s relationship with her close friend, Lizzie, is of particular note, emphasizing the value and importance of positive female friendship and of a strong support system for victims of domestic violence.

I close my eyes and catalogue my injuries. My skull. Ribs. Places others can’t see. He was precise, and I am glad for the careful placement of my wreckages. So I don’t need to show the world my shame. My stupidity.

Visceral, intoxicating and unequivocally enthralling, Shannon M. Parker’s writing is a force of nature whose skill far exceeds that of what might be expected from a debut author. In The Girl Who Fell, the author perfectly captures the electricity of attraction, a force so strong that it both entices and repels in equal measure. This is expertly illustrated in the case of Zephyr, who is immediately drawn to Alec’s apparent quiet understanding and empathy, but is frightened by the rapidity and strength of her feelings and level of commitment a relationship with him would entail. One might mistakenly believe, as I initially did, that knowing the eventual direction of the novel beforehand – a young couple’s seemingly idyllic relationship transforming into one of terror and abuse – might detract from the tension and momentum of the narrative, but this could not be further from the truth. Instead, Parker uses this understanding to best effect as the reader becomes unintentionally complicit in the events of the novel, sure in their knowledge of the eventual direction of Zephyr and Alec’s relationship but unable to do anything to prevent it. As a result, The Girl Who Fell is nothing less than a pulse-pounding psychological thriller that shines an uncomfortable but necessary light on the intricacies of an abusive relationship and its gradual, and often insidiously subtle, evolution. The manipulation. The isolation. The control. Despite all this, however, The Girl Who Fell is far from a story of victimhood from which Zephyr must be rescued. In fact, Zephyr takes a great deal too much upon herself as Parker examines the complicated feelings of shame and culpability often experienced by victims of abuse. The author’s examination of Zephyr’s emotional state is nuanced and sensitive, and easily understood by readers otherwise entirely unfamiliar with this experience.

I think about that other girl a lot.
I wish I knew her. Now.
I wonder if she has a mark on her hip. If she’s safe. And I wonder if there were other girls before her, and if those girls had people who would listen to them the way I did.
I want to tell the girls it’s not their fault.
I want them to tell me I’m not at fault. I want them to hear me say, “I know”.
I know.

Dark and disquieting with a powerful undercurrent of empowerment that reminds readers there is hope and a chance to begin again, even in the most dire of circumstances, Shannon M. Parker’s 2016 contemporary debut is a must-read for fans of realistic fiction unafraid of exploring difficult but vitally important subject matter. Insightful and informative without ever becoming sanctimonious, insensitive, or insulting the reader’s intelligence, The Girl Who Fell should be mandatory reading for young adult audiences and those who care about them. Share this book with your daughters. Your sisters. Your friends. The Girl Who Fell holds within it the power to change – and save – lives. It has already changed mine.

● Kristen @ My Friends Are Fiction wrote “I think this is a must read for everyone and hope that it can help to warn others of the ease of being manipulated.” (Read the rest of the review Here!)

● Joey @ Thoughts and Afterthoughts wrote “This story is not happy, nor is it sad, but rather one that elicits a reaction; a topic that ought to be read and discussed as so often it remains invisible.” (Read the rest of the review Here!)

● Cyra @ Rattle The Pages wrote “It was easy to read and get into, I found the characters to be well written and the story to be believable. This book kept me turning the pages and wanting to know what happens next!” (Read the rest of the review Here!)