Book Review: Everything You Want Me To Be by Mindy Mejia 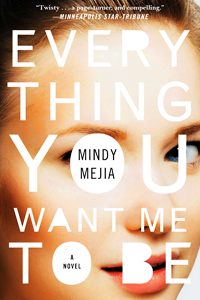 No one knows who she really is…

Hattie Hoffman has spent her whole life playing many parts: the good student, the good daughter, the good girlfriend. But Hattie wants something more, something bigger, and ultimately something that turns out to be exceedingly dangerous. When she’s found brutally stabbed to death, the tragedy rips right through the fabric of her small-town community.

It soon comes to light that Hattie was engaged in a highly compromising and potentially explosive secret online relationship. The question is: Did anyone else know? And to what lengths might they have gone to end it? Hattie’s boyfriend seems distraught over her death, but had he fallen so deeply in love with her that she had become an obsession? Or did Hattie’s impulsive, daredevil nature simply put her in the wrong place at the wrong time, leading her to a violent death at the hands of a stranger?

Full of twists and turns, Everything You Want Me To Be reconstructs a year in the life of a dangerously mesmerizing young woman, during which a small town’s darkest secrets come to the forefront…and she inches closer and closer to death.

“Ordinary men commit extraordinary evil all the time. Trust me.”

Who is Henrietta ‘Hattie’ Hoffman? It’s this question that lies at the heart of Mindy Mejia’s Everything You Want Me To Be. A consummate actress, for seventeen years Hattie has dedicated her life to being all things to all people – the good daughter, the good friend, the good student, and the good girlfriend – taking on an infinitesimal number of roles in order to please everyone in her life, all without ever truly feeling any sort of affinity to or investment in those around her. Disconnected and apathetic, Hattie is counting the days until her high school graduation when she can leave her small hometown of Pine Valley, Minnesota behind for the bright lights of New York City and Broadway, until a new relationship alters the course of her life – and many of those around her – forever.

A gripping mystery and psychological thriller about the violent and untimely death of an eighteen-year-old girl, Everything You Want Me To Be is told from three alternating perspectives – Hattie Hoffman, the murder victim, Del Goodman, the sheriff tasked with investigating her murder, and Peter, Pine Valley’s newest resident and Hattie’s English teacher, a narrative choice that was beautifully executed to great effect in this particular instance and perfectly complimented the story being told. The characters themselves are complex and compelling, none more so than Hattie Hoffman herself. Hattie is far from perfect and is not what one might consider a traditionally ‘likeable’ character. She can be manipulative, reckless and selfish, even to the point of the destruction of herself and others. But Hattie is also fearless, ambitious, resilient and resourceful. Women are, unintentionally or otherwise, conditioned from birth to be kind and accommodating wherever possible, so there’s something incredibly liberating about reading about a female character who unapologetically prioritizes her own desires and needs above others. Hattie has dreams for her future that aren’t dictated by the expectations of others, and she has no qualms about what she’s willing to do to make her dreams a reality. The novel’s setting, Pine Valley, Minnesota, is very nearly a character in and of itself. Mindy Mejia’s descriptions of the area are powerful and evocative, creating an excellent sense of place and allowing the reader to understand Hattie and Peter’s respective claustrophobia and desperation to escape the small town that feels as though it holds them hostage.

While I can’t address this issue with too much specificity for fear of spoilers, my one disappointment with this otherwise phenomenal book lies in Del’s closing remarks about the murderer and their culpability (or lack-thereof). I was really uncomfortable and unhappy with the conclusions this character, and by extension the novel, came to about who (or what) was ultimately responsible for the murder of Hattie Hoffman. As it stands, Del’s passing remark seems to reinforce harmful and pervasive notions about toxic masculinity and entitlement. After an otherwise impressive and riveting reading experience, this final note left a bad taste in my mouth and soured my overall impression of the story. That said, this did not ruin my overall enjoyment of the story, nor would it prevent me from recommending Everything You Want Me To Be to others.