Book Review: Shadow Of A Pug by Casey Lyall 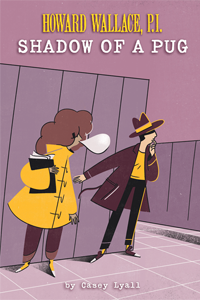 Middle-school detectives Howard Wallace and Ivy Mason are itching for a juicy case. But when their friend and cohort Marvin hires them to prove his nephew — über-bully Carl Dean — didn’t pugnap the school mascot, they’re less than thrilled. To succeed, not only must Howard and Ivy play nice with Carl, they’ll have to dodge a scrappy, snoopy reporter and come face-to-face with Howard’s worst enemy, his ex-best friend Miles Fletcher. Can Howard deal with all these complications and still be there for Ivy when her life is turned upside down? Or will he once again find himself a friendless P.I.?

Wallace and Mason Investigations are back on the case in Shadow Of A Pug, the second novel in Casey Lyall’s endlessly clever, creative and charming middle grade series, Howard Wallace, P.I. In the series’ latest installment, middle school detectives and best friends Howard Wallace and Ivy Mason have been tasked with recovering the school mascot, an unfortunate-looking pug named Spartacus, and clearing the name of Howard’s third-worst enemy and constant tormentor, Carl Dean, all before the basketball team’s upcoming game against their rivals from Stoverton. From players with divided loyalties to a coach who will do anything to win, it will take all of Howard and Ivy’s teamwork, cunning and investigative skills to crack the case in two shakes of a dog’s tail.

Readers familiar with Lyall’s 2016 middle grade debut will discover the same delightful formula in Shadow Of A Pug: An inventive, intelligent mystery that perfectly captures and deconstructs the language and tropes of the noir genre with hilarious and heartwarming results. Armed with his now-familiar bathrobe, blue bicycle and unrepentant gum-chewing habit, Howard is still the same hard-boiled detective with a heart of gold that readers have come to know and love. Where Lyall’s sophomore release deviates from its predecessor, however, is in its greater exploration of the characters’ individual histories and motivations.

While the demise of Howard’s relationship with his former best friend, Miles, was mentioned in passing in Lyall’s debut, the reader is given a much clearer understanding of how and why their eventual estrangement came to pass in Shadow Of A Pug. Similarly, Ivy’s tenuous and often difficult home situation, on which her move to Grantleyville was predicated, is examined in greater detail. In doing so, Lyall allows her audience not only a greater insight into the detective’s investigative process, but also into the detectives themselves. The author also turns her discerning eye to Howard and Ivy’s friendship. Miscommunication and misunderstandings create a rift between the two detectives as their individual insecurities and issues – Howard’s lingering pain and resentment regarding his former friendship with Miles and Miles’ subsequent betrayal; Ivy’s secrecy about an ongoing familial issue – create a roadblock in their otherwise successful partnership. It is only through clear communication, honesty and mutual respect that Howard and Ivy are able to repair their relationship. Finally, Shadow Of A Pug also touches upon several topics that are relevant to and will resonate with young readers. The author uses Howard and Ivy’s investigation into Spartacus’ disappearance, eventually (and hilariously) named “Operation Sportsball” by Ivy, to delve into compelling issues such as parental abandonment, divorce, bullying, peer pressure, and the importance of the arts and arts funding in school.

It doesn’t take the investigative prowess of an astute detective to determine why Shadow Of A Pug is such a wonderful addition to the middle grade market. With an ease and accessibility that introduces the noir genre to a new generation and a subtle sophistication that adults can also enjoy, Casey Lyall’s latest installment in the Howard Wallace, P.I. series promises a little something special for readers of all ages. The only mystery that remains is how we’ll ever muster the patience to wait until we can once again embark on another exciting adventure with Howard Wallace and Ivy Mason.