Book Review: The Stranger In The Woods by Michael Finkel 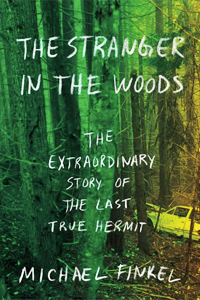 Many people dream of escaping modern life, but most will never act on it. This is the remarkable true story of a man who lived alone in the woods of Maine for 27 years, making this dream a reality — not out of anger at the world, but simply because he preferred to live on his own.

In 1986, a shy and intelligent twenty-year-old named Christopher Knight left his home in Massachusetts, drove to Maine, and disappeared into the forest. He would not have a conversation with another human being until nearly three decades later, when he was arrested for stealing food. Living in a tent even through brutal winters, he had survived by his wits and courage, developing ingenious ways to store edibles and water, and to avoid freezing to death. He broke into nearby cottages for food, clothing, reading material, and other provisions, taking only what he needed but terrifying a community never able to solve the mysterious burglaries. Based on extensive interviews with Knight himself, this is a vividly detailed account of his secluded life — Why did he leave? What did he learn? — as well as the challenges he has faced since returning to the world. It is a gripping story of survival that asks fundamental questions about solitude, community, and what makes a good life, and a deeply moving portrait of a man who was determined to live his own way, and succeeded.

Who is Christopher Thomas Knight? A mentally ill aberration? A morally-bankrupt criminal? An enlightened sage who holds the answers to life’s greatest questions? It’s these question that author Michael Finkel seeks to answer in The Stranger In The Woods, a non-fiction investigative biography which documents the fascinating life of Christopher Knight. A controversial figure whose harrowing tale of survival and isolation captured the public’s imagination, Knight’s remarkable story is told for the first time in The Stranger In The Woods, a narrative that prompts compelling reflection on the nature of solitude, an individual’s role within society and the sacrifices and successes of living life on one’s own terms.

Known alternatively as the “North Pond Hermit”, the “Mountain Man” and the “Hungry Man” to local residents, Knight was a quiet, mysterious recluse who, at the age of only twenty, left his old life behind and began anew in the untamed wilderness of Maine with little but the clothes on his back and his instincts to guide him. For nearly three decades Christopher Knight lived alone without ever interacting with another human being, surviving by stealing food, tools and other supplies from surrounding properties in the area. From books and batteries to tents and Twinkies, Knight perceived these thefts as a necessary evil, and many local residents became so accustomed to the particular tastes and habits of their inscrutable mystery visitor that they began to leave shopping lists for Knight to fill out, though he never availed himself of them. The police, however, were less charmed and, at the time of Knight’s arrest, it was estimated that this mythical folk hero was responsible for more than one thousand burglaries over the course of a quarter century. It was at this time, as Knight was incarcerated and awaiting trial, that he came to the attention of journalist and author Michael Finkel, who felt a particular kinship with the man who was to become his reluctant, reticent subject.

The Stranger In The Woods is not presented as a morality tale that casts Christopher Knight as either the hero or villain. Rather, Finkel relates a narrative told in shades of grey, a thought-provoking exploration of the trials and triumphs of a solitary existence and of an individual whose motivations and choices may never be entirely understood. Though Finkel is able to illuminate very little in this regard, a general history of hermitage and a more precise account of Knight’s twenty-seven years worth of experience of an extraordinary life lived in an otherwise ordinary setting make for a compelling, compassionate and compulsively readable book. From his unique dietary choices to his methods of survival during the coldest months of the year, Christopher Knight’s recollections of his time in the woods are riveting in their ingenuity and harrowing in their inherent danger. Equally fascinating is the book’s haunting conclusion and the lingering questions that remain as to how Knight will navigate a world he is no longer able to recognize or ever wished to return to.

From Emily Dickinson to Ted Kaczynski, individuals who have chosen a life of isolation and solitude have always held a particular fascination for society at large. In The Stranger In The Woods, Michael Finkel offers an engrossing character study of one such recluse whose unique history continues to provide more questions than it does answers but that culminates in one truly extraordinary story.