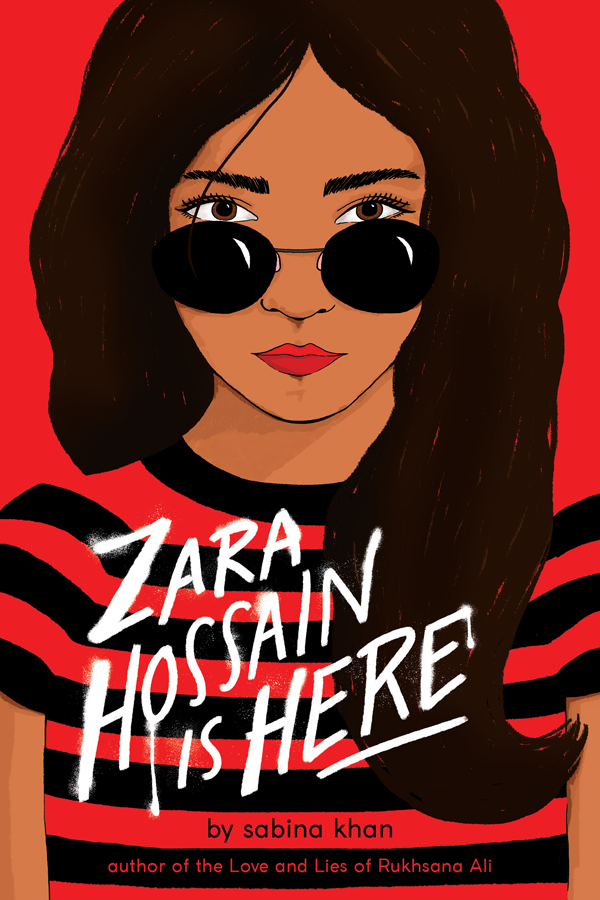 I’m so honoured that Pop! Goes The Reader has been asked to host a special giveaway for a signed advance reader copy of Zara Hossain Is Here by Sabina Khan, which is scheduled to be published April 6th 2021 by Scholastic Press, as well as a signed hardcover copy of Sabina’s debut novel, The Love and Lies of Rukhsana Ali!

Please read on to learn more about Zara Hossain Is Here, including a special note from the author and an exclusive excerpt from the novel, as well as an opportunity for one lucky reader to win signed editions of the author’s phenomenal work!

Zara’s family has waited years for their visa process to be finalized so that they can officially become US citizens. But it only takes one moment for that dream to come crashing down around them.

Seventeen-year-old Pakistani immigrant, Zara Hossain, has been leading a fairly typical life in Corpus Christi, Texas, since her family moved there for her father to work as a pediatrician. While dealing with the Islamophobia that she faces at school, Zara has to lay low, trying not to stir up any trouble and jeopardize their family’s dependent visa status while they await their green card approval, which has been in process for almost nine years.

But one day her tormentor, star football player Tyler Benson, takes things too far, leaving a threatening note in her locker, and gets suspended. As an act of revenge against her for speaking out, Tyler and his friends vandalize Zara’s house with racist graffiti, leading to a violent crime that puts Zara’s entire future at risk. Now she must pay the ultimate price and choose between fighting to stay in the only place she’s ever called home or losing the life she loves and everyone in it.

From the author of the “heart-wrenching yet hopeful” (Samira Ahmed) novel, The Love and Lies of Rukhsana Ali, comes a timely, intimate look at what it means to be an immigrant in America today, and the endurance of hope and faith in the face of hate. 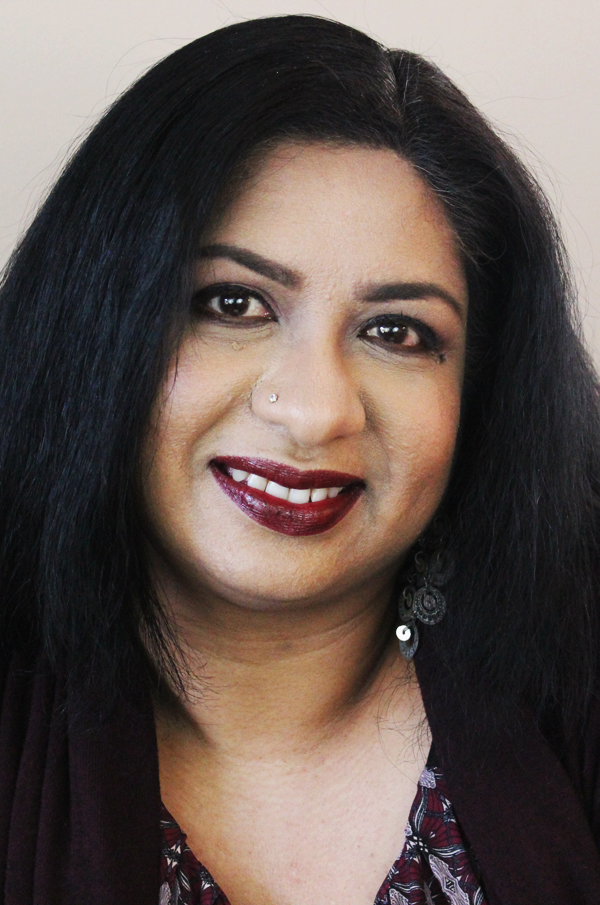 Sabina Khan is the author of Zara Hossain Is Here (Scholastic/ April 6, 2021) and The Love and Lies of Rukhsana Ali (Scholastic, 2019). She is an educational consultant and a karaoke enthusiast. After living in Germany, Bangladesh, Macao, Illinois and Texas, she has finally settled down in beautiful British Columbia, Canada, with her husband, two daughters and the best puppy in the world.

Like the Hossains, my family spent years waiting for our green cards. But then someone else’s clerical error derailed the entire process, and we were asked to go back home. That was when we realized that the United States — the place where my husband and I had started our married lives, where our children were born and had taken their first steps, and where we had dreamed about our future — had never really been our home. With broken hearts, we packed up our lives and moved to Canada to start over.

The precariousness of the Hossain family’s immigration status is a permanent fixture in the everyday lives of many immigrants in the US today, and Zara struggles to feel what so many others today seem to take for granted: a sense of belonging.

When I sat down to write this book, I knew I wanted it to be about those of us who had the courage to leave behind everything we knew and start new lives in a foreign country. About those of us who keep fighting to make space for ourselves in a country where some will always see us as the “other,” where our hard work and contributions may never be acknowledged, but where, nonetheless, we have managed to carve out lives worthy of respect and pride.

In today’s political climate, it is crucial that we all come together as allies to stand up against racism and fight injustice when we see it. I hope that Zara’s indomitable spirit and her refusal to give up will inspire you to resist and push back against the intolerance and prejudice that continue to threaten immigrant families and destroy lives.

I focus on each breath, pushing the anger to the back of my mind. It’s nothing new, this need to punch something, to rage at the world. This is my reality and I’m used to it. That almost angers me more than the actual microaggressions I deal with daily.

I concentrate on each pattern as I step, kick, and punch, chasing that elusive feeling of peace. Finally, it’s there, the calm after the storm, and I stop to catch my breath. Mr. Clair’s last class of the day is just finishing up, so the students are filing out of the rec center.

“Hey, Zara, I haven’t seen you here for a while,” he says stacking the last of the boards and placing them inside the cabinet.

He was my taekwondo instructor for years, ever since I was six and just starting out. I’m glad Abbu didn’t let me quit after I got my green belt. I remember being so frustrated when I didn’t pass the exam the first time that I just wanted to stop. But Abbu would help me with my patterns and Ammi would quiz me on the tenets: courtesy, integrity, perseverance, self-control, and indomitable spirit.

It didn’t help that I used to be terrified of Mr. Clair and that every time he looked at me I turned into a noodle. These days we can both laugh about it. I still go there sometimes to help him out with the white belts. But on days like today, when I feel like I might lose control, it’s a sanctuary.

“I’ve just been super busy with school,” I reply.

I want this space to be free of all the other stuff in my life right now. Mr. Clair knows my family well, given that all three of us spent a great deal of time here up until I was fifteen. That’s when I finally got my black belt.

I give him a hand with the sliding room divider, and then we start. He goes easy on me at first, just a few basic jump kicks, axe kicks, and hook kicks. Then he steps it up, and I have to watch out. I use a roundhouse kick as bait. I step into the maneuver, anticipating his counter. But I continue to spin, executing a perfect hook kick. Just like he taught me. He throws me a smile.

“I see you haven’t forgotten. Good.”

I smile back. “Thanks for letting me hang out.”

He waves his hand dismissively. “You know you’re welcome anytime.”

I step out into the night and wait for Abbu to pick me up. My blouse sticks to my skin, and my hair has morphed into a giant ball of frizz in the eighty-degree heat of this humid evening. Just because I’m used to living in a perpetual sauna doesn’t mean I like it. At all.

Abbu’s BMW rolls up, and I slide in gratefully to let the coolness from the air-conditioning vent blast in my face.

“Thanks for picking me up,” I say, leaning over to give him a quick peck on the cheek.

“I was just on my way home, so it worked out perfectly,” he says. “Did Ammi need the car today?”

I nod silently, looking out the window. It’s almost nine o’clock, 3 but it’s still a little light out. Wherever I end up moving for college next year, I want to go someplace with actual seasons.

“What’s the matter, beta?” Abbu looks at me before checking his backup camera as he pulls out of the parking lot. “You look tense. Everything okay at school?”

It’s not, but I don’t want to worry him. On the other hand, he’ll worry more if I don’t tell him.

“Things have been weird lately,” I begin, still hesitant to confide in him.

“Weird how, beta?” Abbu turns on South Staples, passing a row of apartment buildings and a Circle K.

The light turns yellow, then red, and Abbu brings the car to a stop. He turns to me, concern deepening the lines on his forehead.

“Zara, you have to tell us these things,” he says. “I don’t want you to be scared every time I go to school.

You know how Ammi gets.”

“But we need to know what’s happening. You know how quickly things can get out of hand.”

“But let’s just keep it between us,” he says. “No need to worry your mother.”

The peace I felt is gone now. The truth? I worry enough for all of us.

One lucky reader will win a signed hardcover copy of The Love and Lies of Rukhsana Ali (with a bookmark and two art cards) and a signed advance reader copy of Zara Hossain Is Here! This contest will be open to residents of the U.S. and Canada.