Her Story: Ladies In Literature 2018 with Cindy Baldwin 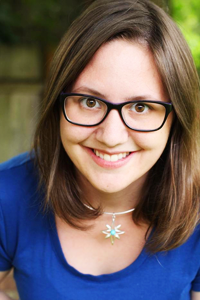 Cindy Baldwin is a fiction writer, essayist, and poet. She grew up in North Carolina and still misses the sweet watermelons and warm accents on a daily basis. As a middle schooler, she kept a book under her bathroom sink to read over and over while fixing her hair or brushing her teeth, and she dreams of writing the kind of books readers can’t bear to be without. She lives in Portland, Oregon with her husband and daughter, surrounded by tall trees and wild blackberries. Her debut novel, Where The Watermelons Grow, was named an Indies Introduce/Indie Next pick for 2018, and has received starred reviews from School Library Journal and Booklist.

It started with a sore throat.

I was in the dressing room at my physical therapy center, in the autumn after I turned sixteen. I’d been swimming — strengthening a kneecap I’d dislocated that summer — and I was putting my contacts back in. As soon as the first lens touched my eye I shivered, prickles of cold running down my damp skin and settling in my throat, an itchy sort of pain that heralded a virus. I sighed — I’d been sick a lot already that fall, and had hoped to stay healthy for awhile.

What I got instead was something I’d never expected. Ever since starting high school, my immune system — weakened by cystic fibrosis, a serious genetic illness — had taken a hit each winter, but I’d never experienced anything like what started that autumn day in the physical therapy changing room. The incipient cold quickly became a high fever and raging sore throat; I crawled out of bed at Thanksgiving to swallow a few bites of mashed potatoes and pie before crawling back in again. I stopped sleeping well, experiencing hours of insomnia before I finally fell into a fitful, nightmare-filled sleep. I took so much NyQuil my body began fighting it, leaving me awake most nights at one a.m., my brain swirling dizzily with the sedation, but still unable to sink into the relief of sleep.

And I was tired. So, so tired, and not only on the days after insomniac nights. I was so tired my thoughts ran at half- or quarter-speed. Homework was almost impossible. Even as a homeschooler, I had to stop attending the few out-of-home classes I was signed up for — cutting back further and further on my attendance until I finally officially dropped out after one semester. Early in the new year, my legs and feet started to hurt, a burning ache that made standing or walking agony. I tried never to use the stairs in my house except to go to bed at night. After months of the mystery sickness, my youth group came to visit me for a service project, because it had been so long since I’d been to church or activities.

My world narrowed, and narrowed again.

My mom took me to doctor after doctor, ran test after test, over the course of ten months where I only ever seemed to make small progresses and then backslide. Finally, after almost a year, I got a diagnosis: I had had Epstein-Barr virus — mono — that had, as a result of my cystic fibrosis, hit my immune system especially hard and morphed into permanent chronic fatigue syndrome and fibromyalgia.

I wasn’t just a high-functioning chronically ill person anymore, with a yearly hospitalization and tough winters but decent health the rest of the year. Suddenly, I was a person who could barely walk, who didn’t have the stamina to talk on the phone to her friends, who was barely muddling through enough high school coursework to graduate on time.

It would probably be permanent.

I’d grown up reading Madeleine L’Engle, and by the time I was sixteen, my favorite book in the known universe had become A Ring Of Endless Light, the middle book in L’Engle’s series about Vicky Austin. It combines some of the things that speak most deeply to my soul: dolphins (always my favorite animal), islands (my soul was born an islander), poetry, big questions about life and death and how you can possibly balance the two.

In my junior and senior year of high school, while I was gripped with the worst of the mono and still learning how to adapt to life as somebody who needed a wheelchair at the mall, I read A Ring Of Endless Light so many times that the binding of my beloved paperback started to fray. In a moment in which my mind was so fogged that I couldn’t make sense of most new books and often spent hours just laying out on the screened-in-porch watching ants climb up my mom’s potted sweet peas and writing disjointed poetry to try to process the changes I’d undergone, re-reading that book was a touchstone, one of the few things I could hold on to in a life that no longer seemed remotely familiar.

As Vicky struggled with the idea of death, and God, and how any of us can choose to live and feel joy with the specter of the first over us while the second chooses not to intervene, so did I. As Vicky wrestled with the sickness and impending death of her beloved grandfather, so I wrestled with the way my cystic fibrosis — which had always felt mostly manageable, even if it was frustrating — had suddenly thrust itself into the dominant place in my life, confronting me with the idea of illness, and mortality, and the fact that the life expectancy for my disease was only in the mid-30s, in a way it never had before. As Vicky learned that sorrow and happiness go hand-in-hand through life, so did I.

The summer I turned seventeen, nearly a year after the post-swim throat-tickle that had been the beginning of my mono infection, I got on a plane for a long-anticipated trip through the Make-a-Wish foundation. The crowning highlight of the vacation was a beautiful day in Discovery Cove, Sea World’s dolphin encounter park in Florida, where I got to get up close and personal with Capricorn, one of Discovery Cove’s oldest dolphins. As I felt the dolphin’s forehead — the “melon” — I thought of Vicky, describing the feel of dolphin skin as resilient pewter.

And even though my attempts to imitate Vicky and communicate mind-to-mind with Discovery Cove’s dolphins didn’t work out so well (don’t judge!), and even though I needed a wheelchair all through that trip for any walk longer than a few feet, I left that dolphin lagoon feeling healed and whole in a way I had not for almost a year. I felt in that moment like I’d caught a glimpse of what Henry Vaughan described in his poem “The World”:

I saw Eternity the other night,
Like a great ring of pure and endless light…

And even if I, like Vicky, didn’t have all the answers to the big questions my heart was asking — life, and death, and God, and grief, and love — in that moment, I felt as though I could move forward with joy into the unknown landscape of my future, buoyed by the knowledge that I was not alone in the questioning. 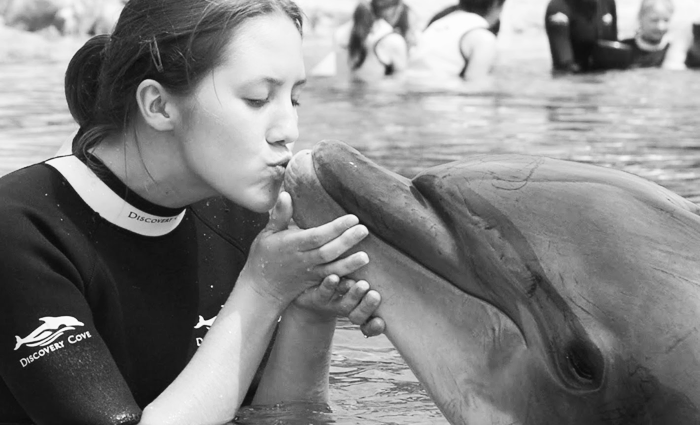 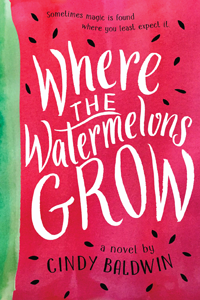 Fans of The Thing About Jellyfish and A Snicker Of Magic will be swept away by Cindy Baldwin’s debut middle grade about a girl coming to terms with her mother’s mental illness.

When twelve-year-old Della Kelly finds her mother furiously digging black seeds from a watermelon in the middle of the night and talking to people who aren’t there, Della worries that it’s happening again — that the sickness that put her mama in the hospital four years ago is back. That her mama is going to be hospitalized for months like she was last time.

With her daddy struggling to save the farm and her mama in denial about what’s happening, it’s up to Della to heal her mama for good. And she knows just how she’ll do it: with a jar of the Bee Lady’s magic honey, which has mended the wounds and woes of Maryville, North Carolina, for generations.

But when the Bee Lady says that the solution might have less to do with fixing Mama’s brain and more to do with healing her own heart, Della must learn that love means accepting her mama just as she is.