Her Story: Ladies In Literature 2018 with Katie Henry 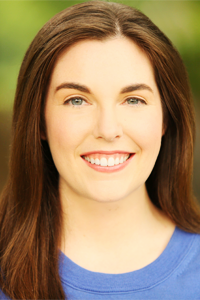 Katie Henry is a writer living and working in New York City. She received her BFA in dramatic writing from NYU’s Tisch School of the Arts and is a published playwright, specializing in theater for young audiences. Her plays have been performed by high schools and community organizations in over thirty states. Heretics Anonymous is her first novel.

When I was a kid, I preferred books about boys.

Not that I didn’t read books about girls, because I did. I read everything. I read books about boys and girls and vampire rabbits. I read the backs of shampoo bottles. I read the parenting guides on my parents’ bookshelf, hoping to use the techniques inside to beat them at their own game. Seriously.

In seventh grade, I picked a book off the shelf of my school library. I can’t remember why I chose it. Maybe it was the name. Catherine, Called Birdy. I was a Catherine, too, just called Katie. Or maybe, somehow I knew Birdy and I shared more than our baptismal names. The more I read, the more the more I felt like Birdy – funny, sharp, unapologetically herself – was me on my very best day. We were both Catholic girls with the same affinity for the weirdest, most violent saint stories. We were both willing to ruin just about anything for a good enough joke. And we were both, for our time and place, immensely lucky and privileged. Of course, there were differences between us, too. For one thing, Birdy lives in 1290, the year Eleanor of Castile died. I lived in 2003, the year that guy from Kindergarten Cop was elected governor of California. Birdy’s biggest concern is escaping her arranged marriage to a horrible oaf. My parents were lovely, supportive people who, as far as I knew, were not preparing to sell me to a middle-aged man.

But still, I saw myself in Birdy’s fury over her complex, vibrant soul being squashed in favor of her worth as a pretty, silent thing a man could possess. I was twelve, and all of a sudden, there were ways I shouldn’t walk, clothes I couldn’t wear, new things I had to be afraid of. All of a sudden, there was my teacher telling me my t-shirt rode up too high when I raised my hand. A man trying to coax me into his car as I waited alone at a bus stop. A boy in my math class telling me I was the “least hot” girl in seventh grade and then immediately trying to grab my least-hot-in-seventh-grade breast. Every single time, I felt that hot wash of humiliation and shame that comes from realizing your body isn’t your own.

Birdy isn’t ever ashamed. She’s forthright and preternaturally wise, able to place blame where it’s really due. She blames her father for selling her like a basket of apples, her mother for allowing it, and the world around her for treating this system as both just and inevitable. Birdy wants more for her life. She wants to be a songmaker, or a wart charmer, or a cross-dressing monk, depending on the day. “You are so much already, Little Bird,” her mother tells her. “Why not cease your fearful pounding against the bars of your cage and be content?” I nearly threw the book across the room. I was angry for Birdy, angry with her. Who wouldn’t throw themselves against something locking them in? Who wouldn’t try to escape a cage, if they knew they were in one?

In the end, Birdy decides that, “I am who I am wherever I am.” Her choices might be limited, and her life might not be the one she’d pick for herself, but she will use all her determination and courage to make it the best one she can. Her wings have been clipped by forces far beyond her control, but that doesn’t mean she won’t try to fly, anyway. Her life feels caged in, but that doesn’t mean the door won’t ever be open. It wasn’t a happy ending, I thought as I closed the book. But it was true, and that felt more important. Birdy had grown up, and made compromises, but it didn’t dampen her spirit. My problems weren’t nearly as big as hers, and my universe was far less limited. If she could channel all her anger and yearning into that fierce kind of hope, I could do it, too.

Like Birdy, I couldn’t be anyone but myself. Like Birdy, I was born into an imperfect world. And though I sometimes fantasized about starting a one-girl/many-pets compound in the woods, I eventually realized that the hermit life wasn’t for me. Birdy helped me see that it was possible to live in an often unfair, confining world without making yourself smaller to fit it. In the fifteen years since I first read Catherine, Called Birdy, I’ve lived the kind of life that Birdy wanted, that so many of my ancestors must have wanted, one of freedom, and adventures, and possibilities. I like to think Birdy was with me, every step of the way.

Girlhood can so often be a cage. But sometimes, it can be an open blue sky. 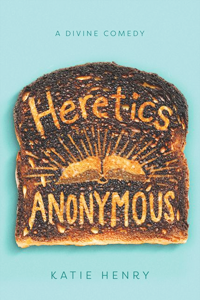 Michael is an atheist. So as he walks through the doors at St. Clare’s — a strict Catholic school — sporting a plaid tie, things can’t get much worse. His dad has just made the family move again, and Michael needs a friend. When a girl challenges their teacher in class, Michael thinks he might have found one, and a fellow nonbeliever at that. Only this girl, Lucy, is not just Catholic…she wants to be a priest.

But Lucy introduces Michael to other St. Clare’s outcasts, and he officially joins Heretics Anonymous, where he can be an atheist, Lucy can be an outspoken feminist, Avi can be Jewish and gay, Max can wear whatever he wants, and Eden can practice paganism. After an incident in theology class, Michael encourages the Heretics to go from secret society to rebels intent on exposing the school’s hypocrisies. When Michael takes one mission too far — putting the other Heretics at risk — he must decide whether to fight for his own freedom, or rely on faith, whatever that means, in God, his friends, or himself.