Please Note: I received an electronic review copy of Like Home and was monetarily compensated in exchange for composing and hosting an interview with the author. This compensation in no way affected my opinions. 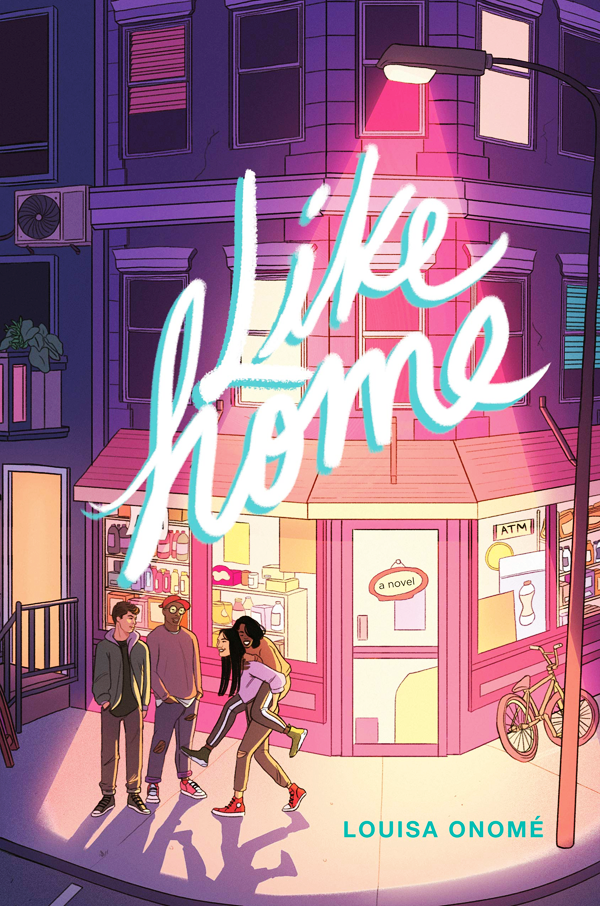 Chinelo, or Nelo as her best friend Kate calls her, is all about her neighborhood Ginger East. She loves its chill vibe, ride-or-die sense of community, and her memories of growing up there. Ginger East isn’t what it used to be, though. After a deadly incident at the local arcade, all her closest friends moved away, except for Kate. But as long as they have each other, Nelo’s good.

Only, Kate’s parents’ corner store is vandalized, leaving Nelo shaken to her core. The police and the media are quick to point fingers, and soon more of the outside world descends on Ginger East with promises to “fix” it. Suddenly, Nelo finds herself in the middle of a drama unfolding on a national scale.

Worse yet, Kate is acting strange. She’s pushing Nelo away at the exact moment they need each other most. Nelo’s entire world is morphing into something she hates, and she must figure out how to get things back on track or risk losing everything ⁠— and everyone⁠ — she loves.

Louisa Onomé is a Nigerian-Canadian writer of books for teens. She has a BA in professional writing from York University. A part of the Author Mentor Match round 3 cohort, she is also a writing mentor and all-around cheerleader for diverse works and writers. When she is not writing, her hobbies include picking up languages she may never use, trying to bake bread, and perfecting her skincare routine. She currently resides in the Toronto area.

1. Puberty can be a confusing and difficult experience for many young adults as their bodies change and no longer feel like their own. We see Nelo struggling with this throughout the novel, as her chest size begins to grow and becomes an object of observation and comment for those around her. She resists her mother’s suggestions that she purchase a new bra and feels uncomfortable with the attention her chest garners from her classmates and friends. Why was it important for you to tackle this particular topic in Like Home?

Awesome question! I chose to put in those smaller tidbits because oftentimes when we think of change, we think of it like this overarching “my friends are leaving and my world is being uprooted” sort of thing. But for the most part, it’s the smaller changes that also have the ability to shake us. For someone like Nelo, who had seen what change does to a friendship and decided she hates it, something as simple as going up a bra size carries a lot of weight because she knows on the other side of that change, there’s nothing good. Hence, her hyperawareness around being perceived by boys around her. Speaking personally, I found that one of the strangest parts of growing up: being perceived different by people around me. It was so jarring, so it was important for me to at least touch on what that felt like.

2. Change, and how we perceive and respond to it, seems to be a central theme in the novel, as Nelo is forced to confront everything from her changing body and the gentrification of her neighbourhood to a growing distance with her best friend, Kate, and a burgeoning romantic relationship with her old friend, Rafa. How do you effectively deal with change in your own life and do you have any advice for young readers as to how they can do the same?

I’m in the process of learning how to float down the river of change as opposed to pushing against the current! It’s hard, though, but I always go back to that saying: allow me to change what I can’t accept and accept what I can’t change. Some things are inevitable and some changes shock us into feelings we don’t want, but I like to sit with the reality of a situation and really see where it’s necessary to expend energy. Sometimes it isn’t! And in those times, I like to pivot and focus on doing things I love and spending time with people I care about. For young readers, I think it’s important to ask yourself where you’re spending energy. Is it towards the things you love? If not, that may be a good starting point towards acceptance!

3. One of the many things I loved about Nelo is how passionate she is about her neighbourhood, Ginger East, and how she dedicates herself to social engagement and community activism to protect and better it as a result. How can young readers inspired by Nelo’s enthusiasm and conscientiousness effectively engage with and become involved in their own communities?

For some people, getting up on a stage and taking charge comes naturally, but for others, behind-the-scenes organization or assisting efforts is where they find comfort. Figure out where you’re most comfortable and grow from there. It could be volunteering for an organization, starting a group at your school, or raising money through creative talents, but I believe no action is too small.

4. Nelo is incredibly strong and resilient, but it’s clear she is also vulnerable and has been marked by trauma throughout her life which she has yet to heal from and which colours how she sees and responds to the world around her in present day. A violent incident at an arcade she and her friends used to visit led to the death of another child and many of her friends subsequently left Ginger East as a result of this incident and other concerns about the neighbourhood. This creates a lingering feeling of abandonment for Nelo, which we can see most clearly in her friendship with her best friend, Kate, who she fears she’s growing apart from. Can you speak a little about this aspect of the story?

Yes for sure! I think Nelo’s abandonment issues are probably the strongest driver of her behaviours. She does a lot of things to keep things the same because she’s someone who has experienced change and saw what it did to her community and her friendships. She’s operating under the belief that all change is bad, because change took away her childhood hangout spots, it took away her friends, and it’s taking away her neighbourhood. As the story progresses, she comes to understand that change doesn’t always need to be seen as a bad thing, or as a black-and-white situation. For her, the shift is subtle, but I think that’s realistic for anyone when we’re trying to accept things. It always take a bit of time and I’d like to think by the end of the story, Nelo is well on her way to that acceptance.

5. Ginger East is drawn with such vibrancy and personality and it’s easy for the reader to care as deeply about the fate of the neighbourhood as Nelo does. What inspired you to write this story and is Ginger East based on a particular neighbourhood or community you’re familiar with?

Ginger East is somewhat designed like the neighbourhood I grew up in. My neighbourhood was mainly residential, where Ginger East has businesses and a bustling community, but in my mind, the layout is really similar. I think I did that primarily for nostalgic reasons, honestly! It’s the same reason I chose to write Like Home. I grew up in a similar environment, where most residents were immigrants and all the kids on the street became close with one another. It had such a strong community vibe and I really wanted to portray that as best I could, in a way to show off what it was like for me growing up.

6. Nelo unintentionally becomes a public figure when a video of her speaking about an act of vandalism in her neighbourhood is recorded and goes viral on the internet. Her mother tells her “When you’re in a public forum, your words don’t belong to you anymore. You can say whatever you want, but people will take only what they need.” This passage struck me as particularly powerful and timely, particularly when social media allows for a previously unprecedented level of access to our private lives and a platform from which to share our thoughts and opinions. What would you say to young adults currently attempting to navigate the potential power and pitfalls of social media? What can they learn from Nelo’s sudden “fame”?

Ooh yes! Social media can be such a powerful tool to connect with people, but the internet never forgets, and that kinda sucks. I grew up during a time where not a whole lot of people were online and your online persona was mostly anonymous, so I can’t really say I know what it’s like to be a young person on social media these days. I will say that a lot of what makes social media addictive is that immediacy, and it makes you want to say things and do things for an immediate reaction. This is why it’s great to have a group chat with trusted friends or a few good people you can vent at in the DMs. You can still have your immediate reaction, but now (hopefully!) there won’t be 700 screenshots of your rant online forever. I’m sure Nelo would say the same thing! She would also say, “Don’t trust anybody out here,” but I’m not sure I would agree with that.

7. Let’s have some fun! Nelo loves Ginger East unreservedly and can’t imagine living anywhere else. If you could live anywhere in the world, where would you choose and why?

Too many places! I love to travel (or at least…. I did) and for a hot second, I lived in London. I really loved it there, but as with most cities, you love it more when you have money to spend, so I don’t think I would move back unless I had copious amounts of expendable income. I think parts of London have such a cool vibe, and there was an ease to things there that I really liked. Plus, when I lived there, that was the most fashionable I’ve ever been in my life and I miss it!

8. From gentrification and displacement to familiar coming-of-age topics like growing up and growing apart, Like Home is an ambitious novel that explores a number of different subjects that young readers are sure to find relevant and revelatory. What do you hope readers will take from the novel?

I hope readers who haven’t ever been around a neighbourhood like Nelo’s come to understand what community looks like in those spaces. Community is built by people, not buildings or corporations, and when we displace people who are invested in growing a community, we in turn displace the community. This sort of thing happens every day, unfortunately. I didn’t write Like Home to specifically share my thoughts on gentrification, but I hope by writing through one version of events, it will entice readers to learn more about what home really means to them.