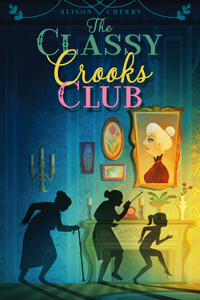 Twelve-year-old AJ is dreading spending the summer with her uber-strict grandmother — that is, until she’s recruited to join Grandma Jo’s heist club — in this hilarious and quirky twist on a summer vacation story.

AJ does not, under any circumstances, want to spend an entire month living with her strict Grandma Jo. Not only does her grandmother tell her how to walk, what to eat, and which rooms she can enter, she fills all of AJ’s free time with boring sewing lessons! Grandma Jo wants nothing more than to transform her adventurous, fun-loving granddaughter into a prim and proper lady…and AJ hates it.

But AJ’s dull summer takes an exciting turn when she discovers that her grandmother’s “bridge group” is actually a club of crooks! And when Grandma Jo offers to teach AJ lock picking instead of embroidery in exchange for help with a few capers, AJ is thrilled to join her grandmother’s madcap band of thieves who claim to steal only for ethical reasons.

But even the most respectable ladies can hide some truly surprising secrets, and AJ must decide for herself what it truly means to be one of the good guys.

Most of the ladies seem to want to share this mysterious secret with me, and that means my time living at Grandma Jo’s house might not be as boring as I expected. Then again, if my grandmother gets her way, it sounds like I’ll be sewing useless stuff all summer, totally clueless about what’s happening on the other side of the wall. How dare she dismiss me without even giving me a chance, just because I’m not like her, obsessed with dresses and tea parties and bridge! Sure, I like to have actual fun once in a while, but that doesn’t mean I should be kept in the dark.
Whatever they’re hiding, I want in. It has to be more interesting than cross-stitch.

When her parents leave for a four week trip to the Amazon rainforest to conduct research on malaria, twelve-year-old AJ is forced to move in with her straight-laced Grandma Josephine. Faced with the prospect of a month filled with etiquette lessons, sewing samplers, and more rules than she can possibly remember, AJ is dreading what she expects to be the longest four weeks of her life until an unexpected discovery proves that not everything – or everyone – are quite what they seem. When it’s revealed that Grandma Jo’s bridge club is really a heist club that ‘ethically liberates’ animals and objects and returns them to their ‘rightful owners’, AJ is offered the opportunity to become an honourary member and take part in their upcoming heists. From abused birds to taxidermied bears, there is no prize too small or too strange as AJ, Grandma Jo, Cookie, Edna and Betty embark on a series of quirky capers undertaken by a motley crew of crooks. As the lines are blurred and the stakes are raised, however, AJ’s time with the classy crooks club begins to seem less like a fun-filled adventure and more like outright thievery, forcing AJ to question her ethics, her choices, and what it truly means to be a lady.

No more sewing? That’s the best news I’ve heard in weeks. And if I do really well with the heist training, maybe my grandmother will actually see my athleticism as useful, even if it’s not ladylike as sewing your name onto a pillowcase. Maybe she’ll stop looking down her nose at me every time I go to soccer or mention my skateboard. Maybe, for once, I’ll feel like the two of us are on the same team.

Alison Cherry is now officially a middle grade author and the world is a better, brighter, and more beautiful place because of it. I was first introduced to Cherry’s work in December 2014 when I read, reviewed, and adored her imaginative Amazing Race-inspired young adult novel, For Real, a story that beautifully explored issues of sibling rivalry and unconditional love in an exciting, unconventional setting. I was later fortunate enough to help Alison reveal the cover of The Classy Crooks Club back in March 2015 and, having fallen in love with the premise and the adorable cover that accompanied it, was quick to add it to my to-be-read list. Thankfully, I can report that I was not remotely disappointed in Cherry’s first foray into middle grade fiction. A candy-coated treat with a rich, satisfying center, The Classy Crooks Club is an irresistible adventure that will have readers frantically turning the pages until the very end.

It’s really late by the time Grandma Jo’s friends go home, and I should be falling asleep on my feet. But I lie awake most of the night, hugging Hector the armadillo and mulling over everything I’ve learned tonight.
My grandmother is a crook.
All my grandmother’s friends, including sweet blue-haired Betty, are crooks. Classy crooks, but still.
I am about to become a crook.

Twelve-year-old AJ is a comic book-reading, soccer-playing, skateboard-riding delight. A girl who eschews the stuffy formality of her full name – Annemarie – and the fussy fripperies her Grandma Josephine considers the trappings of a ‘proper young lady’, AJ is a modern heroine whose characterization subtly and eloquently challenges traditional notions of femininity and womanhood. AJ picks locks, scrapes her knees, and learns that she likes to wear dresses, too. Brave, bold, adventurous, and athletic, AJ’s characteristics are never presented as gender-specific qualities or a inferior approximation of masculinity, but rather a genuine, unapologetic expression of her true self. Despite the outlandish situation in which she finds herself, AJ also remains an extraordinarily relatable character whose struggle to determine and stand up for what is ‘right’, no matter how difficult, is sure to resonate with readers of all ages. Cherry emphasizes the importance of the courage of one’s convictions as AJ is forced to weigh the newfound friendship and acceptance she has found with the flawed but well-intentioned ladies of the club against the ethical complexities of their actions, ultimately underlining the consequences, both good and bad, inherent in the choices we make.

I know I shouldn’t feel excited about the prospect of breaking into someone’s house, but I can’t help it – I do. And I like the way Cookie calls what we’re doing “a project”. It makes me feel like I’m learning a skill for school, totally normal and aboveboard.
I hope my parents and Ben never find out what a delinquent I’ve become.

Part madcap caper, part puzzling mystery, and part coming of age contemporary, The Classy Crooks Club is is multifaceted story that offers a little something for every reader. Young or reluctant readers will enjoy the hair-raising, fast-paced adventure on which AJ unexpectedly finds herself. Where The Classy Crooks Club arguably shines best, however, is in its subtle and astute dissection of interpersonal relationships which discerning readers are sure to appreciate. When AJ forms an unexpected connection with resident ‘mean-girl’, Brianna, fissures begin to appear in her relationship with her best friend, Maddie, who worries that the two are growing apart and AJ no longer has time for her. This, coupled with AJ’s inability to confide in Maddie about her recent heist high jinks because she has been sworn to secrecy, put their longtime friendship in jeopardy. Cherry explores the complications and complexities of adolescent friendship, delving deeply into the fears, insecurities and growing pains experienced by all parties involved. In doing so, the author never resorts to two-dimensional stereotypes or rigid binaries of ‘good vs. evil’, but rather reveals that much like Grandma Josephine’s ‘bridge club’, there is often more to life and its players than initially meets the eye. From taxidermy to lock-picking, no detail is too small to escape Cherry’s notice, and the author’s meticulous research is evident on every page. World-building in a contemporary novel is no less important and Alison Cherry creates not simply a forgettable, soporific backdrop against which the action takes place, but a realistic, three-dimensional world rich with detail that feels tangible and true.

The grannies go back to their planning, and I spend the rest of the day at the table with my plate of forgotten pie, poking and prodding at the insides of the locks. It’s funny – lock picking involves the same kinds of repetitive, small, precise motions as sewing, but this doesn’t bore me at all. It’s like a puzzle, and every time I make one of the tiny pins click into place, I feel a rush of joy. This is going to take a lot of practice, but I know I’ll put in the work. What’s the use of being a thief unless I’m the best thief I can be?
After all, a lady strives for perfection.

A merry, imaginative story about the most unexpected of criminals with a heartfelt reflection on the trials and triumphs of friendship and the ethical intricacies and moral dilemmas we face everyday, Alison Cherry’s first foray into the middle grade market does not disappoint. The Classy Crooks Club is a book I would not hesitate to recommend to readers of all ages and I eagerly look forward to what the author will write next. Readers will be thoroughly charmed by this fun, frolicking romp that is sure to steal their hearts.

● Cee @ The Novel Hermit wrote “If you like reading Middle Grades, especially about heists, grandmother/granddaughter bonding moments, and other fun stuff in it, The Classy Crooks Club is that book you’re looking for. It’s sweet, light, and fun.” (Read the rest of the review Here!)

● Publishers Weekly wrote “A shocking and somewhat disturbing final twist helps the characters learn some surprising lessons about themselves, allowing AJ, and readers, to reconsider what the true “definition of a respectable lady” might be.” (Read the rest of the review Here!)

If you want to become an honorary member of the Classy Crooks Club and follow AJ along on her latest adventure, Alison has been kind enough to offer to give away one signed, finished edition of the novel! This contest will be open until April 12, 2016 and is available to residents of the U.S. and Canada.