Child’s Play Review: The Stars Of Summer by Tara Dairman

Child’s Play is a regular feature on Pop! Goes The Reader in which I review picture books, chapters books, and middle grade books for the young and the young at heart. 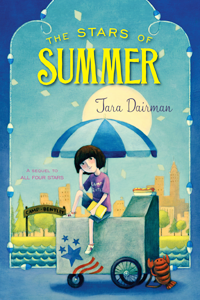 It’s not easy being an undercover restaurant critic — especially when you’re only twelve years old!

After successfully completing her first restaurant review for the New York Standard newspaper, Gladys Gatsby is looking forward to a quiet summer of cooking and eating. But her plans quickly go awry when her friend Charissa Bentley delivers Gladys’s birthday gift: A free summer at Camp Bentley.

As Gladys feared, camp life is not easy; she struggles to pass her swim test, can’t keep the other campers happy while planning lunches, and cannot seem to get away from the annoying new “celebrity” camper. The worst part is she’s not able to find a moment to sneak away for her latest reviewing assignment: finding the best hot dog in New York City. But when Gladys learns that her hot dog assignment might actually be a dirty trick made up by a jealous fellow critic, she fears her reviewing career could be over forever.

“Jen, have a look at this,” he said. “Charissa’s family has given Gladdy a free summer at Camp Bentley!” He plucked the paper out of Gladys’ hand and passed it to her mom.
“Oh, how generous!” she exclaimed. “Honey, what a great opportunity for you to make even more friends!”
But Gladys didn’t want more friends. In fact, she wasn’t sure she wanted to keep all the ones she had at the moment.

Gladys Gatsby is back and better than ever! With her cooking privileges restored and her position as one of the New York Standards‘s pre-eminent restaurant critics still a closely-guarded secret, twelve-year-old Gladys has everything firmly under control and is looking forward to a long, relaxing summer spent combing through cookbooks and researching new recipes. But you know what they say about the best laid plans. When Gladys’ new friend, Charissa Bentley, surprises her with an all-expenses-paid admission to her family’s day camp, Camp Bentley (“The Funnest Camp Ever!”), Gladys’ carefree, culinary summer plans quickly go up in flames. Believing that camp will provide the perfect opportunity to slip into the city and complete her next newspaper assignment, Gladys agrees and all too soon finds herself having to contend with the perils of swimming lessons, kitchen duty, adolescent authors and opportunistic journalists who will go to any lengths to ensure that her next column is also her last. None of this, however, will prepare Gladys for her most daunting challenge of all: To find the best hot dog in all of New York City. Gladys will have to kiss a lot of frogs – or is it eat a lot of dogs? – before she finds a winner.

You can do this, she told herself. A writer for the world’s most famous newspaper doesn’t get intimidated by stuff like camp.

Tara Dairman changed my life. This time last year I was a reluctant middle grade reader at best, largely dismissing books aimed at this age group as too young, too simple, or no longer relevant to my life. Then I read All Four Stars. In Gladys Gatsby I discovered a bright, plucky, effervescent heroine whose passion and unbridled enthusiasm opened my eyes to a catagory of fiction I thought lost to me forever. When I shared my review of the first instalment in this series, All Four Stars, back in June 2014, I made no secret of the fact that I thought Tara Dairman’s debut one of the most delightful, enjoyable and entertaining reads in this or any other age designation or genre. I largely credit All Four Stars with rekindling my love of middle grade fiction and encouraging me to pick up the spectacular middle grade novels that I read soon afterward, including Hook’s Revenge, The Truth About Twinkie Pie and Colonial Madness. Much to my delight, Dairman’s sophomore publication and second in the All Four Stars series, The Stars Of Summer, is no less magical and it was immeasurably wonderful to have the opportunity to catch up with Gladys Gatsby and revisit a world and a cast of characters that have come to mean so much to me. This is one middle grade series that is not to be missed.

Hot dogs?
She felt like the message had reached out of the computer and slapped her across the face. It wasn’t just what it said, but the way it was written – so harsh and commanding! Her editor was usually so much nicer over email.
But even if Fiona had written it in her usual friendly way, there would be nothing nice about this message. In one fell swoop, Gladys’ exciting summer filled with delicate pastas and boldly flavoured stews had been ripped away and replaced with…salty meat on white bread.

Whether making hundreds of baloney and cheese sandwiches for a mess hall of not-so-happy campers or on a quest to discover New York City’s most scrumptious hot dog, Gladys Gatsby pursues everything in her life with an infectious, earnest enthusiasm that the reader can’t help but find endlessly enchanting. It is this passion and drive that first endeared me to this memorable, loveable protagonist, and I was happy to see that Gladys remained unchanged. This was of primary concern for me, as the sudden loss of one’s interests in lieu of other considerations is not an uncommon practice in young adult fiction. While I can name a number of young adult authors who manage to balance both romance and individuality with a deft hand, such as Morgan Matson and Jessi Kirby, they, unfortunately, prove the exception rather than the rule. Suddenly, gone are the singing lessons and dance recitals, the theatre rehearsal and band practice that had once proved such significant elements of the character’s lives. In middle grade literature, however, where romantic pursuits are given little, if any, consideration, characters are allowed to pursue their interests without inhibition or distraction. In fact, they are celebrated for them! Throughout The Stars Of Summer Gladys is given the freedom and the support to pursue her passion without recrimination or judgment.

Gladys’ parents dug in, comparing this hot dog with the ones they’d had earlier. Gladys agreed that the flavours were pleasantly surprising. But in truth, they weren’t half as surprising as the fact that her parents had come in here with her at all. Just a few months ago, trying something as crazy and unfamiliar as an Icelandic hot dog would have been unthinkable for them.
It was like they were finally growing up.

As was the case in The Stars Of Summer‘s predecessor, Tara Dairman’s account of Gladys’ gastronomical adventures are evocative and rich in mouthwatering-detail. From a three-tiered, strawberry-lime birthday cake to steamed lobster claws with fresh dill-infused butter sauce, readers should be warned against reading this delectable novel on an empty stomach, lest they find themselves gnawing on the pages in distraction. I was admittedly a little disappointed to learn that Sandy Anderson and Parm Singh, Gladys’ two closest friends, play a largely diminished role in the novel. That said, in their absence Dairman is able to focus and build upon a number of familiar relationships first established in All Four Stars, the most notable of which is the fledgling friendship between Gladys and Charissa. A relationship initially born solely of convenience and a shared love of food, this attachment is examined in greater depth as Charissa demonstrates previously-unexplored insecurities and Gladys learns that, much like the most delicious of dishes, there is often more to something (or someone) than initially meets the eye. The author also introduces a number of vibrant new characters, including Camp Bentley’s resident “celebrity” and literary wunderkind, Hamilton Herbertson, author of the best-selling novel, Zombietown, U.S.A.. Pompous, precocious, and unerringly charming, Hamilton is one of the (many) highlights of the novel and promises to steal readers’ hearts as well as every single scene he’s in. With the inclusion of new characters also comes the inclusion of new types of relationships as Gladys navigates everything from professional commitments and complications to her first kiss. While The Stars Of Summer is clearly meant to be marketed toward middle grade readers, Dairman’s writing is so clever and the merriment so irresistible as to make this novel the perfect choice for readers both young and young-at-heart.

The weeks I spent on this quest taught me that sometimes you have to give things a second chance. Sometimes you need to take the time to dig in deeper, to learn about a food’s variations and try it under different circumstances. If you do, you may discover that what made an unsavoury impression on you the first time around actually has a lot more potential than you think – including the potential to bring people with different tastes to the table.

Tara Dairman has done it again as twelve-year-old Gladys Gatsby returns in this charming, riotous and utterly delicious sequel to the author’s delightful 2014 debut. Tag along as everyone’s favourite adolescent chef and restaurant critic explores everything from the shores of Camp Bentley to the streets of New York City as she undertakes her most difficult assignment yet: To unearth New York’s most delectable hot dog. With a thoughtful examination of and emphasis on honesty, friendship, first impressions and second chances, Dairman’s sophomore release promises to both entertain and educate in equal measure. Readers won’t be able to help but shout “Fudge” as they close the final page on the latest instalment of the adventures of Gladys Gatsby, but with a forthcoming sequel already underway, The Stars Of Summer promises to mark not the end, but merely the beginning of a new chapter in the storied life of G. Gatsby.

● Stephanie @ Kitchen Frolic wrote “I highly recommend this book (and the first book in the series, All Four Stars) to all young foodies and young-at-heart foodies alike.” (Read the rest of the review Here!)

● Karen @ For What It’s Worth wrote “The Stars Of Summer deftly blends adventure, family, friends (who are not all cookie cutter perfect – which I love), a few twists and *gasp* sabotage! with a feeling of wistfulness, for older readers, of summers past.” (Read the rest of the review Here!)

● Bonnie @ For The Love Of Words wrote “While Gladys’ adventures did often feel a bit lacking in credibility…I admittedly found myself so completely lost in the cuteness of it all that it was easy enough to overlook and just sit back and enjoy. “ (Read the rest of the review Here!) 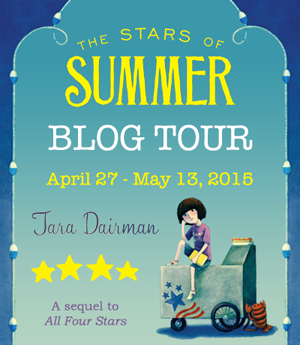 Don’t forget to visit all the wonderful stops along The Stars Of Summer blog tour for a variety of reviews, recipes, and much, much more!